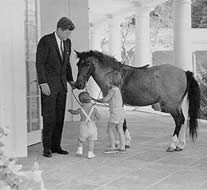 Presidential Pets continues with a look at the beloved pets of Presidents past and present. This part will detail President Kennedy through current President, Joseph Biden. Interested in the first First pets? Be sure to check the links to part one and two at the end of the article!

Kennedy and his family were all avid animal lovers and during his term, the White House was filled with pets. Jacqueline Kennedy even created a special play area for her children near the West Wing, and included housing for their pets in the design.

Caroline, Kennedy’s daughter, was given a pony by then-Vice President Lyndon Baines Johnson. She named the pony Macaroni and children around the world fell in love with the animal as they wrote letters to the pony. During the bitterly cold winter, Macaroni often pulled Caroline and John all over the White House grounds in a sled.

Other Kennedy animals include:

President Johnson’s beloved Yuki was a mutt found at a Texas gas station by first daughter, Luci Johnson. Many photographs capture the image of Johnson howling as Yuki perched on his lap, joining in.

Other pets include beagles, Beagle and Little Beagle, and Him and Her. Blanco was a white collie. Johnson also kept a variety of hamsters and lovebirds.

There were quite a few dogs in the White House while Nixon was vice president and later on, president. They included:

Gerald Ford had a cat named Shan and a golden retriever named Liberty who was given to him by Susan, his daughter. Ford often used his dog as a way of escaping meetings in the Oval Office. When he wanted a meeting to end, he would signal Liberty, who would approach the guest with her tail wagging. This would cause a break in the conversation and allow Ford to wrap up the meeting.

Photos of Liberty were autographed with a rubber stamp of her paw print.

Grits is a dog that was given to Amy Carter, the daughter of the president, by one of her teachers. Apparently, this dog was not a good match for the family, and while House diary records a meeting between the parents and a dog handler, Grits was eventually returned to the teacher.

Rex was a King Charles Spaniel who replaced Lucky, a Bouvier des Flandres when she grew too big and was sent to the ranch to live. Rex’s doghouse was designed by Theo Hayes, the great-great grandson of former President Rutherford B. Hayes and was formerly owned by William F. Buckley, Jr., the conservative columnist. Rex’s first official act as First Dog was to help the President pull the switch to turn on the White House Christmas tree. The dog often pulled very hard on his leash and was photographed many times pulling President Reagan away from reporters posing questions. Reagan also cared for Cleo & Sara, Tortoiseshell strays, and several unnamed cats.

Millie, a Springer Spaniel belonging to George and Barbara Bush, holds the distinction as being the first dog known to have authored a book. With the First Lady’s help, she penned Millie’s Book: As Dictated to Barbara Bush. In it, Millie gives a dog’s-eye view of life in the Bush White House.

Millie gave birth to several puppies while living at the White House, amongst the litter was Ranger and Spot – two more dogs that resided as Bush’s pets.

Socks, the cat joined the Clinton White House while First Daughter Chelsea was still a young girl – despite the fact that both parents were allergic to cats.

Hillary Rodham Clinton later wrote a book titled, Dear Socks, Dear Buddy. The book contains a series of letters written to Socks and Buddy (the Clinton’s chocolate Labrador retriever) by children from around the world.

George W. Bush kept both cats and dogs. Barney and Miss Beazley were both Scottish Terriers and Spot was a mutt. Ernie, India, and Cowboy were the President’s beloved cats.

Cowboy, said to be the President’s favorite, died of kidney disease in February 2000 at the age of 12. The Bushes’ ginger polydactyl cat Ernie was judged too wild for White House life and later found a new home with a family in California.

Bo is a male (neutered) Portuguese Water Dog belonging to the family. President Obama was given the dog by Senator Ted Kennedy after months of research was done to find a hypoallergenic dog due to Malia Obama’s allergies.

Sunny joined the family in 2013. She is also a Portuguese Water Dog and was selected from a breeder in the Great Lakes region. We are still trying to educate our presidents on the importance of rescues!

No animals in the White house during Trump’s term.

Say hello to Champ and Major, two german shepherd dogs that belong to President of the United States and his wife, First Lady Jill Biden. Both are rescues, which just makes us that much more impressed with President Biden.

According to People, the couple have some rules for letting the dogs have the run of the White House: The’re not allowed on the furniture.

“We trained them from the beginning,” Biden said. “Champ is old, he’s 14 years old and he was extremely well-trained by the Canine Corps and he thinks he’s Secret Service, but Major, who is a big, little dog, is about a year-and-half-old and the only rule Jill has and he follows it: do not get up on the furniture.”