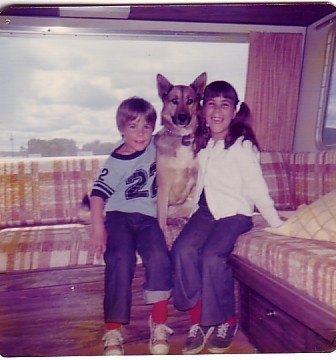 My brother, my beloved dog Lance, and me.

Stacy founded PetsWeekly in 2007 when she found that the majority of her writing centered on pets. It quickly became far more popular than a blog, growing rapidly and demonstrating once again that it is very important to do what you love. While her family has been telling her for years (advice that she promptly ignored, only to find that her family was right).

PetsWeekly was an instant hit – which really shocked and delighted your pack leader. That initial success taught her the importance of a business plan, as she really had no idea how to monetize the site, but found herself devoting at least 40 hours a week to its maintenance – even while working in a corporate environment to keep the pack and pride fed…

The web site began as a “Frontpage” site and was mostly unmanageable due to the spaghetti code. And so, she went back to work in the corporate field to make enough money to finance a new, more manageable site. Thus began her first experience with programmers (an experience she found equivalent to herding cats).

She realized that the corporate environment was “sucking the lifeblood out of her,” and so – with the help of her very supportive husband and family – she recommitted herself to making PetsWeekly the best site on the web for multi-species households. In it, she does her very best to cover pet-related news, product reviews, funny stories and everything else that is “All Things Pet.”

Her past includes a long stint as Asst Controller (a job title she loved); another few years as a Senior Copywriter; too many years in the education field as a middle school teacher and later as a curriculum developer; a short period of time (that seemed like an eternity) at a Fortune 500 company. All the while, (and quite accidentally) she realized she had spent the past twenty-five years honing her marketing skills.

Her “long ago” past includes time spent training wild mustangs for eventual adoption, and working at several jeep tour and “dude ranches” as a tour guide. She once spent an entire year touring the country in a ’74 Pontiac Fire bird with her two wolf hybrids and that is where she learned about logging camps and the great outdoors (as well as how to live with a wolf hybrid).

Conquering the Food Chain: Living Amongst Animals (Without Becoming One)

Many years ago, she unwittingly threw her back out while vacuuming and ended up sleeping and working on the floor with a laptop for several weeks. Her pack of animals, which included a coyote-wolf hybrid, was thrown into discord and she wrote a series of short stories about the experience that eventually became a book.

According to reviewers, “Stacy Mantle became known as the …Erma Bombeck of animals for good reason. Her humorous, take-no-prisoners, writing style is interwoven with poignant vignettes of courage and loyalty shown by the animals she shares her home with. Her books inspire her readers to new respect and appreciation for all animals, everywhere.”

Stacy is a full-time professional writer, and works from her home studio and office located in the beautiful southwestern desert area of Arizona. Living the life she writes about, her household includes an ever-changing number of cats, fish, turtles, several dogs, and even (up until 2010) a coyote/wolf hybrid. She was incredibly fortunate to marry a funny, loveable man who has the patience of a saint and a heart of gold.

Stacy writes two weekly pet product review columns on her PetsWeekly website: On the Prowl: A Feline Purr…spective, and The Weekly Growl: A Canine Commentary. Featuring only the best of the newest pet products on the market, her reviews are based on rigorous, in-house testing by her menagerie of animals. As a result, her reviews and recommendations are greatly prized, and sought after by major vendors in today’s booming pet product industry.

Stacy is author of several books, including the popular, Conquering the Food Chain: Living Amongst Animals (Without Becoming One)

. This book is a compilation of her most popular humor stories about single life with feral cats and a coyote.

She followed this up with several educational books, including A Guide for Using The Odyssey in the Classroom

with a series of educational activity books for children entitled, “So, You Have…”

In 2004, teaming up with business partner and illustrator, JC Carpenter, Stacy wrote an award-winning children’s book called, “So, You Have a New Kitten!” aimed at educating children and their parents about the importance of responsible pet care. This book was quickly followed by “So, You Have a New Puppy!” in 2005. This year thousands of these privately sponsored “Children’s Learning & Activity” books are being donated to, and distributed by, humane and rescue organizations across the Southwest.This set of books features 12 titles in two languages and includes:

series of books is the Shepherd Series, an urban fantasy series that is focused on Alexandra – a woman who can communicate with animals – all animals…

All of her books are available in Barnes & Noble bookstores nationwide, as well as online at www.bn.com or www.amazon.com. Her stories, articles and reviews can be found in a number of notable print publications which include The Arabian Horse Times, Today’s AZ Woman, Pets Illustrated, Jackson Parents Magazine and many others.

Many of Stacy’s stories and articles have been translated into several languages, and now reach an international audience.

A dedicated animal activist and rescuer, Stacy regularly participates in Trap/Neuter/Release (TNR) projects, determined to help reduce the numbers of feral cats across the country and educate the world on their plight. She is also active in wolf hybrid and wildlife rescue. When room in her crowded home allows, she often fosters young and/or abused animals in her home until they are healthy enough for adoption.