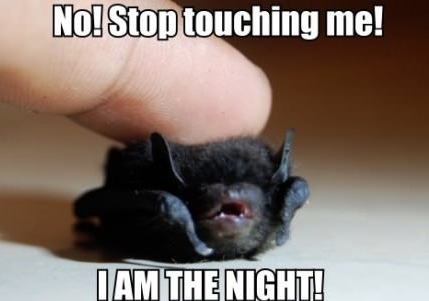 Ancient lore is rife with examples of superstitions that are meaningless.Yet, being the superstitious species that we are, we cling to these myths.

Here are some classic animal-related superstitions that you should ignore.

It’s lucky if a bat falls on you, it’s unlucky if a family brings a bat into the house. If a bat flies into a house, it’s a sign that ghosts are out and about; and it’s a bad omen if bats appear during a wedding ceremony.

These are all ridiculous superstitions.

A bat is not going to change into a vampire, a bat flying around a house three times is not an omen of death, and it’s not unlucky to see a bat during the daytime. Sometimes, the bat is young or tired and gets stranded out in the heat, or loses his bearings and can’t make it home.

Bat World offers a great resource for what to do if you find a bat.

Using Echolocation to find their prey, they fly by sense rather than sight. Don’t pick up bats off the street even if they appear to be dead as they can still bite. If you are bitten by a bat, get to the emergency room immediately as some can carry rabies.

One superstition says that killing a bat will shorten  your life. That may be true – especially if you bring in a rabid bat for show-and-tell like this little boy did (spoiler alert: the entire class had to have a series of rabies shots)…

Blood sucking vampire bats are real – but they mostly feed on chickens and cows and only live in Latin America.

The rest are great mosquito eaters (among other bugs they favor). In fact, bats can eat over 1,000 mosquitos a day! Build a bat house in your home and watch the insects disappear. Here’s how…

Here are the more popular myths, superstitions and legends about spiders, wolves, and more…

Okay, we admit – they’re a little scary. But despite the number of arachnophobes in the world, there are not nearly as many superstitions about them as you may think…

Traditionally, spiders have been considered good luck symbols for weavers and spinners, as well as those in the fashion industry. Some superstitions say that spiders bring good luck in money matters.

In Native American lore (the Pueblo), the creation of the universe can be attributed to the Spider Woman and those in the Ukraine believe it is bad luck to kill a spider in the house.

Spiders are actually very beneficial as they eat many other dangerous and annoying insects. Only a very few North American spiders are poisonous (including the Brown Recluse and Black Widows). Keep an eye out for those two (among others), but learn to live with spiders – they are a very important part of our ecosystem and we rely on them in many ways.

Vilified throughout history, the wolf has been given a bad rap in nearly every form of literature and movies (with the exception of, maybe, Twilight – but Meyer made even a vampire look good). Now they are endangered and have become a symbol of both independence and reliance.

After humans nearly caused the gray wolves to go extinct in the lower 48, conservationists have fought to bring them back. Successfully. Yet, the legends and superstitions that plague this noble species continue.

While the majority of ranchers and farmers have made their peace with the breed, the hunters are still upset that one or two fewer hunting passes are handed out on elk and deer each year, and have again fought to eradicate the species.

Education is the only way to reach these people. Decreasing your intake of beef is the other way to make a difference.

Ranchers love blaming the wolf for all of their personal ills in the world, but really it comes down to ranchers (who use public lands at a HUGE discount to feed their herds) wanting more land for their herds and hunters wanting more elk permits.

Since the wolf has been used as a scapegoat , there are so many superstitions about wolves that we had to write an entire article devoted just to wolf superstitions. Old beliefs die hard and antiquated ideologies persist in every generation. It’s up to us to save these animals.

Take an active role in preserving wolves. Learn how to live with wolves, go on a wolf howl, and discover how they help the ecosystem that we rely on so heavily… It’s up to us to preserve these domestic animals that are so much a part of our lives and history.

Read about St. Francis and the Wolf of Gubbio and our page on Wolf Superstitions.

In many places, toads can be poisonous (especially if it’s a Bufo Toad), but mostly they are harmless creatures that make great insect eaters.

If you live in the southwestern United States, Central of Northern Mexico, and South America; you’ve likely met a toad known as the Colorado River Toad, Sonoran Desert Toad, and Cane Toad (Bufo alvarius). These toads can be particularly dangerous to your pets, especially dogs, who love to “mouth” them.

Learn what to do if your dog gets hold of one of these toads as these toads produce a hallucinogenic poison that can result in your pet’s death if not treated immediately.

In many locations around the world, toads and frogs feature prominently in magical folklore.

There’s a British legend that says carrying a dried frog in a pouch around your neck will prevent epileptic seizures and putting a live one in your mouth (don’t ever do these) can cure whooping cough and Tuberculosis.

In ancient Egypt, the frog-headed goddess Hekt was a symbol of fertility and birth; but then, I’m sure we all remember the great Egypt frog plague in the bible.

Many cultures believe you can predict the weather through frogs and toads (a prediction I’ll take more seriously than most meteorologists) and others believe they can control the weather – for example, the Maori people believe that killing a frog can bring floods and heavy rains – but some African tribes believe the same act will bring drought.

You can also learn more about toads and frogs from this adorable children’s book from Joanne McGonagle for your kids called An Ordinary Toad’s Extraordinary Night.

While these toads were at one time known to be “witch’s medium”, we all know that these days they are valuable for our environment and deserve to be left in peace.

There are thousands of legends (most very cruel) about black cats.

The Irish believe that a black cat crossing your path at moonlight will bring death by epidemic, but the real dread of cats first arose in the Middle Ages near Europe.

Cats were often associated with plague As it turns out, fleas (which all good animal parents despise) were the culprits responsible and killing cats actually contributed to the spread of the disease.

Back in the Middle ages, any women who took pity on the homeless cats (who were subsequently labeled as witches) were thought to keep them as “mediums”.  Despite being innocent, those branded “witches,” were burned at the stake and their beloved pets were burned with them.

Sadly, many European societies attempted to force cats into extinction. But they quickly learned that the species is a little too hearty to succumb to ignorance, and so our beloved cats persevered.

Obviously, cats are not bad luck and we all know that black cats are independent, resilient, intelligent, and beautiful — something any animal lover (other than the occasional Ailurophobe – a person who fears cats) can attest to.

It’s not all historical gloom and doom for black cats. The Egyptians of course adored their four-legged friends, understanding the value that cats bring to an educated society. The Japanese believed that cats, particularly black cats, bring good luck to any family lucky enough to have one.

Fisherman’s wives, on the Yorkshire coast of Britain, believed their menfolk would return safely if a black cat were kept in the home. In fact, black cats became so expensive that there were few sailors who could find or afford them!

They also bring luck to artists and those any who hope to experience love. A black cat in an audience on opening night of a play portends success. In the south of France, black cats bring good luck to families who feed and protect them, and they are thought to bring good luck and happy marriages to brides who receive them as a wedding gift.

Just make sure that you bring in your outside cats (and here are Five Reasons to Always Keep Your Cat Indoors) indoors for a few days before and after Halloween – there are humans who are far more dangerous than cats and will injure or kill them given the opportunity.

This is a a fun poem fun poem we wrote for fans of Edgar Allen Poe about a stray cat “tap, tap, tapping on a small cat door.” We hope you enjoy.

Athena was the Greek goddess of wisdom and was often portrayed with an owl as her companion. Did you know that according to Homer, Athena originally started out with a crow as her companion, but quickly tired of his pranks, and impressed with the seriousness of the owl, made him her companion instead.

In African cultures, the owl is associated with sorcery and a house that has an owl hanging about generally meant that a powerful shaman lived within.

The Native Americans associated owls with prophecy and divination. The burrowing owl (called Ko’ko) was the protector of the underworld. The Snowy Owl was held sacred to the Inuit of Alaska, and has an amusing story about the owl growing frustrated with Raven’s antics and throwing a lamp on the poor bird, which is how Raven’s feathers were turned black.

However, once again, Europe is the gloomy killjoy… they believed that the owl was a harbinger of bad tidings and doom, which Europe had a lot of back in the day. They grew fond of blaming innocent animals for these problems. Even Shakespeare used the birds as premonitions of death in both MacBeth and Julius Caesar, and Sir Walter Scott wrote that they were birds of ill omen.

Despite earning fame as a helpful companion in Harry Potter, we can assure you that owls do not make good pets in real life. View them from a distance and give this noble animal the gift of life and flight rather than captivity. Owls are nocturnal birds, and depending on the species, can grow large enough to pick up kittens and puppies, so be sure to bring your animals in at night!

If you love owls like we do, here’s a beautiful Owl necklace and bracelet we think you’ll enjoy!