How Tabby Cats Got Their Forehead “M” 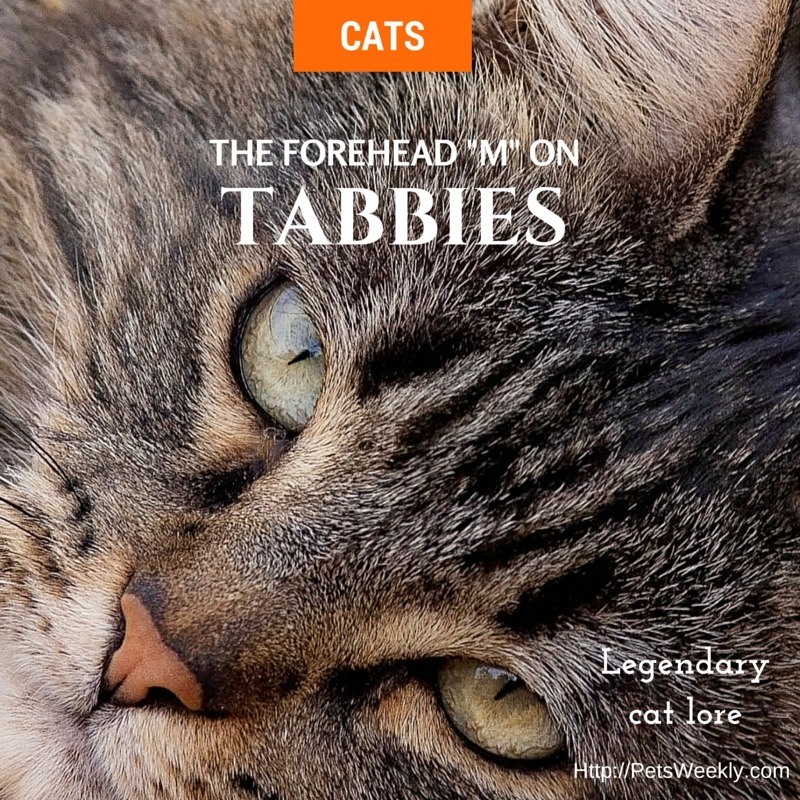 Tabby cats have a rather unique history. If you have seen a tabby cat, you’ve probably noticed the distinguished looking “M” pattern on their forehead. Due to this marking, most have enjoyed special privilege over the years as being favored by  religious leaders.

While there are dozens of legends about how Tabby Cats received this special marking, today we’re exploring those based on Christian and Muslim faiths.

There are many beliefs about how this cat received their marking that span multiple religions and mythos, but those of the Muslim faith seem to be the most committed to their feline friends.

Cats have long held a special place in the heart of Islam and consider cats to be the “quintessential pet” – largely due to a cat’s natural tendency to stay clean. Islam teachings include guidelines on caring for cats! These say that:

Muslims are instructed to treat cats well and are taught that cats should be loved and cherished. In fact, mistreating a cat in Islam is a sin. According to legend, mistreatment of a cat even landed a woman in hell (as it should be for all who mistreat animals).

Mistreatment of cats is a serious offense in Islam. Allah’s Apostle said, “A woman was tortured and was put in Hell because of a cat which she had kept locked till it died of hunger.” Allah’s Apostle further said, “(Allah knows better) Allah said (to the woman), ‘You neither fed it nor watered when you locked it up, nor did you set it free to eat the insects of the earth.’ ” Hadith – Bukhari 3:553, Narrated ‘Abdullah bin ‘Umar [Also in Muslim, Narrated Abu Huraira]

As you may know, the Prophet Muhammad was an avid cat lover. He had a beloved pet cat named Muezza for years. Legend says that one day, Muezza fell asleep on part of Muhammad’s robe.

Like any good cat lover, he didn’t want to wake his sleeping feline. But, he had a prayer meeting that he couldn’t miss…

So he carefully took out his knife and cut off the sleeve of his road so his cat could nap undisturbed. The occasion was marked by the letter M magically appearing on the forehead of Muezza (perhaps because of the name of Muezza or maybe because of Muhammad’s name) both starting with an M. 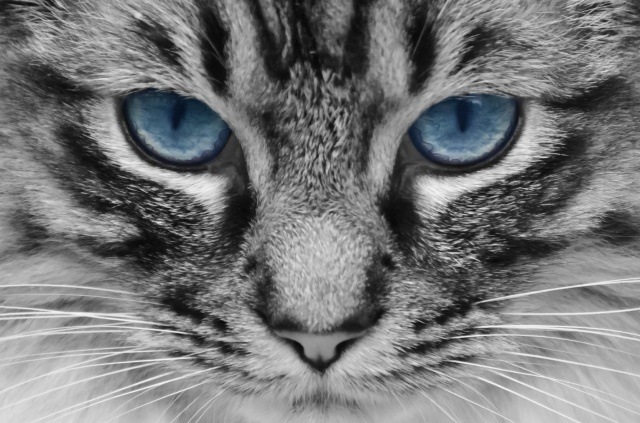 Abu Hurayrah was a famous companion of the Prophet and a major narrator of his truths. He loved cats so much that Muhammad gave him the nickname Abu Hurayrah (which quite literally translates to “father of Kittens”).

Legend has it that the reason Sayyiduna Muhammad loved cats so much was that his life had been saved by one.

One day, a snake crawled into his sleeve and refused to leave. A cat was called and asked the snake to show its head, in order to discuss its departure. When the snake finally appeared, the cat pounced on it and carried it off.

Another version of this story is as follows:

“There are variants of the story of how Abu Huraryra’s cat, which he always carried in his bag, saved the Prophet from an obnoxious snake, whereupon the Prophet petted her so that the mark of his fingers is still visible in the four dark lines on most cats’ foreheads, and, because the Prophet’s hand had stroked her back, cats never fall on their backs” (A. Schimmel, Deciphering the Signs of God, Albany, NY, 1994).

Another legend of Muhammad and his cat is associated with the cat landing on all four feet.

Upon returning from Mosque one day, Muezza (his cat) bowed to Muhammad. So impressed was Muhammad, he stroked his cat three times and bestowed upon him the ability for cats to land on all four feet. 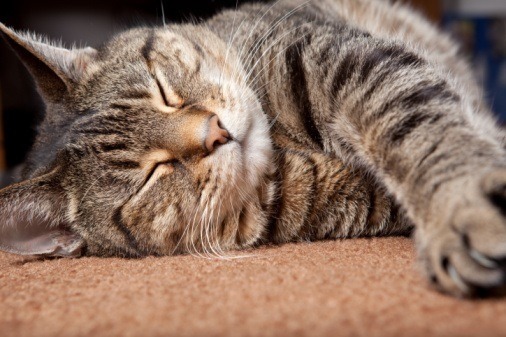 The christian version of the M on a cat’s forehead takes us back to the manger in Bethlehem just after the Virgin Mary had given birth to Jesus. Exhausted from the trials of labor, Mary put her newborn to rest in the manger. But, Baby Jesus was having none of it. The straw in the manger scratched his skin and he cried. The animals nearby did their best to calm him with neighs and soft noises, but nothing could appease the infant.

He screamed and cried until finally, a stray cat wandered past. Hearing the baby crying, the cat instinctively jumped into the manger and curled up next to Jesus. In just moments, baby lulled to sleep from the cat’s warm, soft fur and gentle purring.

Mary was profoundly grateful to the tabby and she gently stroked the forehead of the animal in thanks. As she did, the M marking appeared and the tabby cat was forever honored with the M of Mary.

Now, none of this is mentioned in the bible. In fact, cats are not mentioned once in the bible, which is curious as nearly all types of animals are mentioned. (Personally we believe that one of the translators was an ailurophobe and perhaps intentionally left out any mention of cats – but who knows?).

Either way, we consider all cats to be treasures – but the tabby truly holds a special place in our heart. 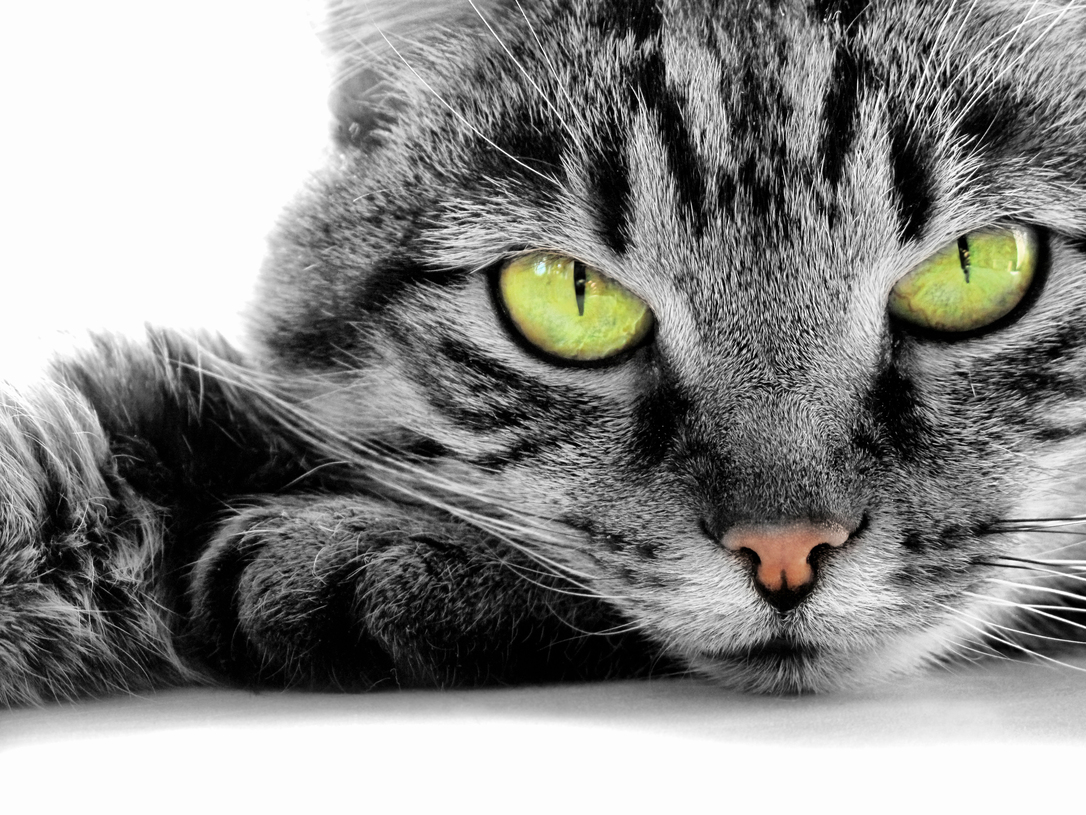 The Cat Who Couldn’t Cat #MyUnspokenPet
PetsWeekly, 2021 ©All rights reserved.