The World Will Know It, Too… 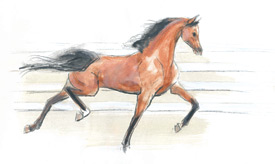 I get interesting letters from people asking about the relationship between horse racing and the show world. When our farm branched into racing, a lot of our friends asked, why? They couldn’t see why we would “abandon” the show world for something they flat-out didn’t understand or appreciate. Looking back, I have to smile because it turned out that we didn’t abandon anything. We just grew.

Like an increasing number of breeders entering the racing industry, we expanded our horizons. Let’s take a closer look at that question and those horizons.

Horse shows, like most shows for purebred livestock, started out as a chance for breeders to compare their stock and evaluate the progress of their breeding, nutritional and training programs. And horse racing has always been right in there.

According to author Margaret E. Derry, in her book Bred For Perfection, animal breeding is an ancient occupation dating back at least as far as fourteen thousand years. The impact of purebred animals on our agricultural economy—and other areas of our culture—is undisputed. While they may not have started as such, today, the exhibition of purebred horses and dogs has been elevated to international stature. Who, for example, hasn’t seen the Westminster Kennel Club dog show on TV as it is broadcast each year from Madison Square Garden in New York City? Who hasn’t seen the Kentucky Derby, Preakness or the Belmont Stakes? Anyone who has ever been to Crufts in England, the Salon du Cheval in Paris or the national Arabian horse show in Scottsdale can not walk away without being impressed by how far the world of purebred animals has come. Or, convinced that glamour doesn’t only belong to movie stars and singers. OK, you’ve just given us examples of glamorous races and shows, you say. Why are you telling us that?

I’m pointing out how big our sporting world is, and how much is available to those of us making champions.

Some of the most successful people in racing have come from the show world. What secrets did they learn along the way? To find that out, you’d have to ask the many Arabian horse trainers succeeding on the track and, from there, you’d have to ask people like Neal and Ginny Ehrhart of Keystone Driving Force, who are among the top winners in Harness racing. After Neal and Ginny, you’d go on and ask people like Jack and Mary Butler, who were busy showing Siberian Huskies in New England about fifteen or so years ago, but have some of the most successful racing Greyhounds in the business today. Or ask Jan Troxell, another Greyhound trainer, who to this day still raises and shows German Shepherds from her racing farm in Oklahoma. The list goes on. Maybe what these successful breeders and trainers discovered is that both disciplines—showing and racing—go hand in hand. Maybe they see the world of champions from a wider scope and in a brighter light than their competitors do. And maybe that’s an advantage.

A recent conversation with Greyhound breeder/trainer (and former Quarter Horse jockey) Kevin Gresham, from his farm in Kansas puts it this way.

“Years ago,” he says, “Back when I was ridin’, you’d have horses that did all kinds of crazy stuff. Some of them horses could really get to carryin’ on and a guy could get hurt. Well, there was this one trainer who did a lot of winning. And I mean a lot. I always liked ridin’ his horses ’cause they would just, you know, be real calm and keep their mind on business. Well, what this guy said was, the best racehorses are the ones who are trained the most.”

Now, that’s a very interesting statement and a rather broad one. But, Kevin has a broad base of experience. Besides his horses, he also has a few show dogs. What he’s really know for, though, is his success raising and training some of the most expensive, winning Greyhounds in the sport. Greyhounds raised or trained by Kevin sell for tens of thousands of dollars and they earn even more. So, it should come as no surprise that Kevin Gresham counts among his clients some of the most well known owners in the game and he knows what he’s talking about.

Listen again to what he said: “The ones who are trained the most.”

Hearing that statement is one thing. But, understanding it and putting it into practice is a whole different matter. What it boils down to is this: Kevin is talking about “cross-training.” He’s saying the racehorse with the most diversified experience is the horse least likely to be surprised, distracted or worried about anything that happens before or during the race. That horse will have less to think about and can pay more attention to matters at hand. And that’s the kind of difference that makes a champion.

We in racing believe in winners. Whether we are fans, owners or somewhere in between, all of us play a role in the making of champions and many racing athletes have crossed successfully from one arena to the other. Racehorses have proven themselves in dressage, driving, hunter/jumper classes, western pleasure and halter. Likewise, racing Greyhounds have gone on to win ribbons in the show ring as well. Rare, maybe, but real nonetheless.

Racing—whether it be horses, dogs or pigeons—instills something in us that we can’t get anywhere else and it keeps that “something” alive. It’s all about heart. It’s about passion and desire. And it reminds us how powerful and exciting we, ourselves, can be.

At the racetrack, played out before our very eyes, we see enacted a time-honored ritual that touches a chord in all of us. It’s no accident that it’s called a performance. We see racehorses from across the country competing to prove which is fastest, which stable is best, which trainer the wisest and which owner the most savvy.

In a society growing ever more soft, where schools and companies and towns seem to be falling into a political correctness that makes our lives more boring at every turn, we in racing have the “real” first turn to look forward to. Racing fans know the American Dream because we re-enact it every day. Unfolding before us on the track, we portray the promise that if you look straight ahead and give your all, you will get from where you are today to where you want to be tomorrow. Fast or slow, sooner or later, you will cross the finish line.

Racing is about the individual, not about a team you hide behind. Racing is about you, alone out there, against all odds. They don’t teach you that kind of self-confidence in high school, but our sport of racing does. Take it to heart and you will always know—no matter how long you live or what you do—that you gave your best. And if you reach the winner’s circle the world knows it, too.

Teaching a Coyote to Fetch
PetsWeekly, 2021 ©All rights reserved.