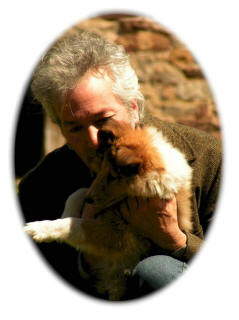 “Our power to love is the only real power we have; and “what” to love, the only choice.” – RH.

Author/Artist RON HEVENER specializes in animals and the romantic, adventurous people who love them. An accomplished artist who started by selling handmade souvenirs and telling stories to tourists at Pennsylvania Dutch farmers’ markets, Mr. Hevener’s studio is now an official tourist attraction and his collectible figurines and the prints from his novels are bought and traded throughout the world. His original paintings and sculptures are sold in galleries, displayed in museums and can be found in many private collections. Growing up in the farmlands of Lancaster County, Pennsylvania, Ron Hevener was surrounded by horses, dogs and county fairs. “Along the way, I raised every kind of animal I loved. Even a kid or two, and I don’t mean goats!” he laughs.

In the early 1970’s, Mr. Hevener studied at the North Museum of Natural History, Franklin and Marshall College, Lancaster, Pennsylvania. He is a member in good standing of the following organizations:

Mr. Hevener owns one of oldest dog show kennels in the U.S. (“Lochranza,” specializing in Collies since 1945). His dog “Kane” (Ch. Amberlyn’s Bright Tribute) was featured in his popular novel “The Blue Ribbon.”

His interest in Arabian horses goes back to the early days of Delaware Park, now one of the leading Arabian racetracks in the US. His stallion “Nahgua” (Nugui El Khamsin) was one of the first Arabians to race at Delaware Park and inspired Mr. Hevener’s novel, “Fate of the Stallion,” which sold out its first printing. The making of the novel was developed into a documentary and Mr. Hevener joined forces with Nicker Communications for its international television broadcast.

Along with horses and show dogs, Mr. Hevener’s interest in Greyhounds started with the adoption of a retired racer and led to a full-fledged racing kennel inspiring his novel, “High Stakes.” Today, he owns sons and daughters of major Greyhound bloodlines from the US, UK, Ireland and Australia.

As a recording artist, Mr. Hevener has performed over 100 songs for producers and labels in the Philadelphia market. He has recorded for labels such as Coffee And Cream Music; RMB Music; Caprice International; Sandstone Hill Records; CareSounds and Pennywood Press. He has worked with producers such as Col. John Hunt, Bolden Abrams, Jr, Ross Care, Joey Welz and Maxine Bochnia. His songs have reached the Top Fifty on radio and Top Five on the dance charts. Following the success of songs like “I Wish You Love” . . . “Sweet Lover” . . . “Come Up & See Me (The Mae West Song)” . . . “If I Let Myself Go” and “The One To Say Good-Bye” Mr. Hevener stepped back and chose to write and record only movie themes. His most recent release, the title song for the film “Fate of the Stallion” was arranged by Spanish composer David Giro’ (“Mystery of the Nile”) and is, perhaps, his most favorite of all. “Of everything I’ve recorded, this song is the truest to my heart, my beliefs about life, and to my own personal nature. Maybe I’m just a late bloomer!” he laughs. He is speaking of the song, “Never Let Me Go.”

Every month, Mr. Hevener’s column, editorials and essays inspire a loyal following of more than a million and a half readers. He is a regular contributor to many publications for animal lovers including the popular magazine, ShowSight, where he writes for readers coping in today’s complicated world.

Mr. Hevener is a believer in living life to the fullest. He is a frequent guest on radio and television shows, where his independent spirit and zest for life leave the audience wanting more. Mr. Hevener appears at bookstores, libraries, theaters, schools, gift stores, pet stores, dog shows, art shows, horse shows and other public events.

“Your life is a movie, and you write the script,” he says. “On With The Show!”

You can reach the author at Hevener (at) dejazzd.com