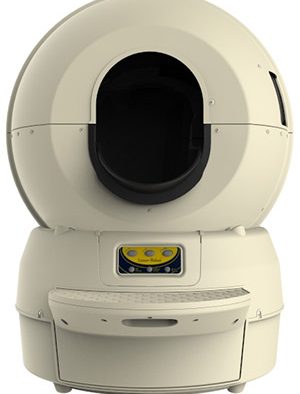 The Litter Robot looks like something out of a Buck Rogers movie, which is great for me, because I happen to be a sci-fi fan.  Being an Aquarius, I love anything futuristic, and the Litter Robot LRII Automatic Self-Cleaning Litter Box,

is exactly that – futuristic.

Now, while I am very future-minded, most animals are not very comfortable with change. That is not to say they can’t be taught. As luck would have it, I happen to be pretty good at persuading my pets to become “trendsetters” and, for the most part, they eventually give in. Yes, even the cats…  Remember, they were worshipped as Gods in Egypt, the most futuristic of all societies, at one point in history! And so, as with all new things, pets need to be persuaded and taught to use the Litter Robot.

If you are reading this column, you already have a cat or kitten, and therefore probably have a litter box.  You are either an “automated household” or you’re a “scooper”. You may even be a combination of both. Myself, I’m a fan of automation, but then – I have 8 cats who share a home with me, so I kind of need to be. If I were a scooper, scooping is all I would do each day.

So – the key for me is finding an automated system that is effective, cost-efficient and can handle a lot of use.

What I love about the Litter Robot

is its completeness and it’s satisfaction in a job well done.  There is absolutely no odor associated with the Litter Robot, the containment area is completely enclosed, so I only have to empty it once a week or so.

Most of all, none of the waste gets caught up on rakes, probably because the system doesn’t have any rakes.  It operates in a completely different fashion that is incredibly difficult to describe.  In addition to not clogging up, the machine has not stalled out on me once in over 45 days of use.  That in itself is absolutely amazing.

Update: After about 4 months, we did have some problems with the initial unit picking up feces from the bottom of the box upon circulation, which eventually created a big mess. I have spoken to LitterRobot about this issue and they have since developed a new unit which has eliminated this problem. We have not yet had the opportunity to try out the second model.

Now, about the room it’s in.  I have chosen to use it in the room that houses my indoor/outdoor cats, of which I have seven.  These are the cats that are most averse to change, are ex-feral cats who are still making the “decision” to become house cats (which will likely never happen), but they like a warm house, a meal each night, and never to be touched by a human. So, in return for these things they have decided that using a litter box while inside this house is not so bad.  Up until now, they have used another automated box, which we will review soon.  However, we chose to swap that box out for the Litter Robot on this experiment.

All except one of the cats began using the box, or chamber, without any problem.  There is one cat who refuse to use the Litter Robot. Why?  I’m not sure.  It took maybe two to three days for the other ones to adjust to using the new system.  The biggest thing we did to help them adjust was to unplug the unit for a few days, and place (this will sound a little gross, but it did help), a bit of their feces in the unit.  Within minutes, they were jumping in to cover up their scent, and that’s all it took.  We plugged the unit back in, let them get used to the sound, and the rest is history.

You may have your own method to accommodate your cat to the chamber.  Some people have found that using Feliway in the room helps.

I can assure you that it will be worth your time.  The initial cost of the unit is a bit high, about $299, but if it is as sturdy as they claim and continues to be as reliable as it has been, it will have been well worth the cost in litter saved and anger at jammed rakes that I no longer have to deal with.

Be prepared that it will probably take your pets a few days to adjust to this unit, and if you have an incredibly large cat, this may not be the unit for you.

Your larger cat breeds (like the Maine coon or Bengal) may just feel too cramped in the chamber.  So – be sure to visit the website and read through it carefully before making the purchase.  But, rest assured that the staff at Litter-robot are easy to work with and anxious to make your change a happy one for both you and your favorite feline!  Remember, change is good and technology, well technology is even better!

Hisses & Spits: It has a small opening, but after you’re in there no one can bother you – especially the pesky kittens who are always able to bother us in bigger boxes.  So – if we have to choose between the small opening and the kittens, we’ll take the small opening. Also, see the update above.

Purrs: Almost all paws up – one or two are in dissent, and we are working on them…

We love the new Litter-Robot!  We use even less litter, have not had anything get caught in the rakes, and only have to change it once a week!  Bravo!

Drawback? The rotation cycle is extra long and rather noisy, so keep it in an out-of-earshot area.  It can be a bit annoying when you’re trying to sleep. After nearly a year of use, we discovered that the rotating circle had a tendency to pick up extra feces and make a bit of a mess. If you keep the litter tray very clean, you will not have a problem with this.

iFetch Helps Anyone Play Fetch with Pets
Stacy Mantle May 17, 2017

Drones: The New Way to Film Your Pet