Tellington TTouch: The Touch That Teaches 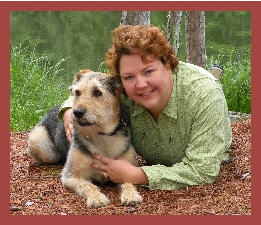 In my career as a dog trainer, I often have clients come to me at their wits end with behavioral problems their companion animals are exhibiting that are a disruption to their home life and in some cases, potentially dangerous.  After each session with my clients, I find myself becoming more deeply grounded and peaceful and sharing this work has become an integral part of my career and life.

My tool kit for working with companion animals does not include shock collars, prong collars, or a lot of gadgets to sell people.  I come to the client’s home with my two hands, a peaceful heart, and a willingness to see the companion animal in their own unique perfection.

Up until 2 years ago, I was like most dog trainers – demanding that the dog behave as we the human intended.  Controlling the situation and there was no ifs, ands, or butts about it.  Then a miraculous event occurred which has changed my relationship with companion animals profoundly.

As a volunteer of a Twin Cities Humane Society that was having a fundraiser, I was asked to bring a dog and a cat from the shelter out for a woman to work with in front of a large group of people.  I had no preconceived ideas nor did I have the time to research who the famous woman was that I was to meet.

Using only her hands, Linda Tellington-Jones allowed that dog and cat that were just shells of their true selves with medical conditions and terrors of being found roaming on the streets and now locked in a shelter, to find their confidence and sense of calm so they could become aware of their surroundings and become grounded and balanced.

It fascinated me – more so because I was the one who had just moments before taken the terrified dog and cat out of their kennels and had seen the fear they both exhibited.  I signed up that day to become a part of the Tellington TTouch program and that has lead me to continue to work with dogs and cats and share this gentle work with their guardians.

Tellington TTouch or TTouch (Trust Touch) was developed using a simple but profound idea.  The potential for learning could be enhanced and learning time shortened dramatically by a person moving his or her own body in non-habitual movements.  Linda immediately thought, if this works for humans it will also work for animals.  Linda developed precise touches and now presents lectures sharing these techniques all over the world.  She continues to mentor thousands of students each year in her training program to become a TTouch Practitioner.  To become a certified Tellington TTouch Practitioner takes a minimum of two years and involves six complete weeks of week-long courses.  Between classes, case studies are completed to lessons in real-life experience.  Classes are taught in many locations and to find a course location in your area, you can visit the Tellington TTouch website at www.ttouch.com.  There are also many day-long and weekend-long seminars that you can take to learn more about the work.  Linda has written many books about TTouch, also.

The basic TTouch is a circular touch, with your hands exhibiting a light pressure on the animal.  Being calm and relaxed while practicing the touches is key.  The touch brings about a sense of awareness to the companion animal.  Once the animal feels safe and secure, a new way of seeing the world happens, one TTouch at a time.

What I most enjoy about TTouch is sharing with people the techniques so they also can change their relationship with their companion animals.  I recently was hired to work with a Yorkie that barked when the door bell rang.  A very common problem with dogs.  I think you could have knocked the owners over with a feather when I started our session with practicing some deep breathing.  What was astonishing, was that Betsy, a very hyper active dog began to lay down at my feet within 45 seconds of us breathing and not paying attention to her.  When we model for our pets the behaviors we require, they find their calmness on their own.  We then worked on having Betsy sit and stay on a dog bed when people came to the door and after a short time, the solution was at hand.  The owners were so relaxed when I left and they thanked me for showing them a new way to see their dog.

A major part of my TTouch and dog training is putting on seminars for people to learn TTouch.  I organize canine events at Gunflint Lodge and also local places in the Twin Cities.  Recently, I was at Gunflint Lodge and one of the activities was dog sledding.  The musher introduced me to one of his dogs that he had adopted a few weeks prior but was extremely scared of people.  The Musher had not even really touched it but a handful of times.  He was hoping over time, the beautiful grey husky would begin to relax.  With a dog like this, I could not touch the dog myself but I did not want to let the opportunity go without just trying something.  I stood by the Husky as it was cowering in its little kennel, and while the Musher took my husband for a dog sled ride, I started to do Touches, the circular movements on my arm.  I was deeply breathing, and encompassing a feeling of safety and security.  Within about two minutes of deep breathing, a nuzzle began to gentle touch my hands.  As I continued to touch my own left arm with my right hand doing the specific touches, I occasionally drifted to touch the scared dog.  I allowed the dog to feel the touches when the dog felt safe and if he wanted to leave he was free to go.  Within the next 20 minutes, I continued to touch the husky and worked all of the way to the tail area, covering many areas of tension while I continued to breathe and send out a feeling of calmness and safety.

When the Musher came back, he came over to where I was sitting and the once fearful dog, began to lick his hand with a wagging tail.  I had been with the dog for 40 minutes, did I do something? Was the Musher different this time when he approached? Are there mysteries of the human animal bond that we don’t know?  I think all may be true but this I believe, when we are present and mindful with pure intention, anything is possible.

Veterinarians Need Behaviorists and So Do Pets
Guest October 24, 2014

10 Pet Related Tax Write-Offs You Should Know About

Veterinarians Need Behaviorists and So Do Pets