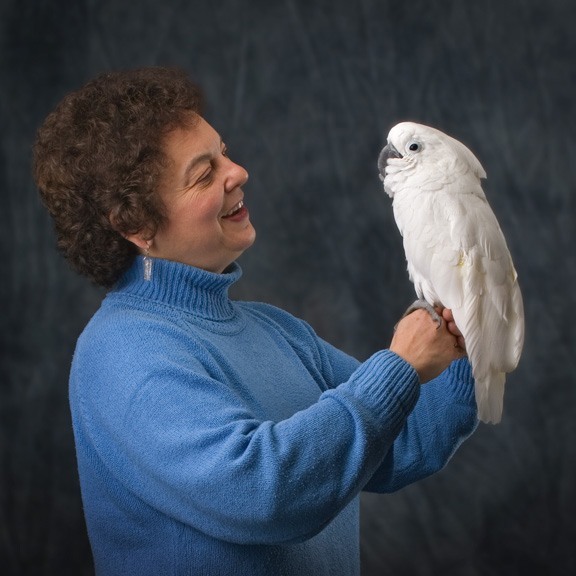 When Faye Pietrokowsky, well known animal communicator and intuitive, agreed to do a guest post for PetsWeekly, we were super excited. We hope after reading more about Faye, you’ll visit her at her website and learn how you can talk to your animals.

When people learn that I do pet and people (business and personal) intuitive work, they almost always have questions that they sometimes aren’t comfortable asking. For some reason, it seems easier for people to ask about communicating with animals than my work with humans. I suspect this is because many animal  lovers understand that animals talk even if their humans don’t understand. As the pet industry grows by leaps and bounds every year, more attention is being given to our pets and their world. Thanks to the media and the proliferation of people who live with animals, the human public is more open and receptive to entertaining the notion that animals are complex (expressions, thoughts, behaviors, abilities, etc.).

Communicating with animals is as natural for some humans as talking to people.  In my experience, both species are complex and reading people isn’t different than reading animals.

Some communicators find it easier to deal with animals because they are much more straight forward than people.  I agree.  When animals misbehave and do deeds that their humans dislike, it is most often in response to something that was done to them (bringing stress home, getting less attention, not keeping promises,leaving and not saying goodbye, bringing a new animal into the family,etc.). Very often they attempt to make their wishes known to their people (looks, demanding more attention, following them around, calling out to them, etc.). These efforts often go unnoticed. So, their last resort is to act out.

Humans that communicate with animals do it with such ease, that it seems very natural, and no different than someone who can swim for hours in water or a writer or a painter who feels at home creating their craft.  How it actually works is a bit of a mystery which adds to the magic.  Some “readers” believe that pictures are sent to animals who in return send pictures back to humans.  For me, just like my work with people, my “intuitive information” comes to me as a vision, a thought/idea or I hear something. I do believe that time and distance is not impacted by this communication which explains why an animal will know the day and sometimes the very hour that the humans are returning from a trip and wait by the door.

Some animals understand many words.  How they know is a question that is not easily explained.  I have witnessed too many situations not to believe this.  Recently a friend told her little dog to show her where the poop was in the backyard.  The little four legged one walked over to the pile and waited for my friend to come to where she was and scoop it up.  I once told my cat  on a Thursday that on Saturday I was going to  take her to the groomer’s to have her nails trimmed.   Saturday arrived and my cat was no where to be seen.  I wanted a couple ours and announced. “Okay you can come out. It is too late to go to the groomer’s today.”  A few minutes later, my cat walks down the steps. Some clients can identify the red Christmas toy or the green ball.

Yes, anyone can learn how to communicate with their pets. Remember, you are an intuitive genius.  You were born with the ability to use your insights to understand the people and world around you. You may have lost sight of this as you have gotten older and live in this physical world that demands proof and common sense. Ask yourself what you animal is telling you and listen to what comes into your mind. It might be  thought, a feeling, etc.  Ask your pet questions and listen for a response. Be patience. The answer may come to you in a very subtle way as a thought when you least expect it. If you have a feeling that  your pet wants a different can of food or a different toy, follow your hunch and notice what happens. Be a detective.  Explore your ideas and feelings. Practice makes perfect. The more you talk to your animals and listen, easier.

There are too many humorous, amusing, and revealing stories to recall and to write about. Many are a testimony to the depth that many animals have, and really dispel the myth that our pets do little more than sleep, eat and show some affection, dislike,etc. Many animals are observing and deep thinkers and feelers who understand and comprehend their humans’ actions, behaviors, and thoughts. The following are just a few of my favorites.

A client came for a session with me primarily to ask if her cat was happy living with her. I told her yes and then hesitated.  I was a little embarrassed.  Her cat complained to me that the woman was messy, and she didn’t like walking on her stuff that was all over the carpet.  So I told the woman.  She responded with a laugh and unabashedly acknowledged that she did indeed leave stuff all over the floor.  She told me to tell her beloved cat that she promised to do a better job of not leaving her belongings on the carpet.

Sometimes the smallest of dogs have  the most interesting and amusing things to say.  (I have wondered if this is at all related to the their reality, their vulnerability.. They are aware of their small size and experience being small in a world that is much bigger than them.  Many creatures and inanimate things like buildings, signs, cars etc. are larger them them.  They can be pushed around, stepped on, run over by a vehicle, a bicycle and by any number of other things.)  I don’t know if these small dogs attempt to compensate by using their brain more than other creatures for survival.  They have to be aware.  It is in their best interest to study and understand the world around them.  Survival often depends upon it.  A small shih tzu mix told me one of the funniest stories.  I met this little guy when his two humans, both senior citizens, were staying at a hotel.  I met all three in the lobby of the hotel.  The couple brought their four legged friend with them, because they seldom travelled without him.  They began telling me about this dog went with them into many restaurants unnoticed.  The woman pointed to her large purse indicating that this little dog sat quietly inside the bag while they ate their meals.  I started to say “It is an agreement that you have.  He knows that if he wants to come along, he needs to be quiet.”  I didn’t finish my sentence when I telepathically heard the dog say “They eat some smelly food.”  I began laughing, and told the couple what I had heard.  They too laughed.  It made sense.  A dog’s sense of smell is much stronger than humans can begin to fathom.  Of course, some of the food smells bad.

Another dog, a basset hound named Sofi relayed a telepathic message to me  that she wanted spaghetti.  The message was relayed, and I learned that Sofi likes spaghetti.

After returning home from a business trip, a woman brought a toy home for her dachshund. “Here is a new toy for you Ebony.”  The dog didn’t seem to be excited.  She was puzzled.  Ebony always enjoyed her toys.  A few months later, this woman was going through Ebony’s box of toys and came across the exact same toy in the box.  No wonder!  Ebony already had this toy!

A client called me about Maxi, her African parrot.  He was driving her nuts, and she was threatening to make bird soup out of him if I didn’t come over to her house and help her. He was gnawing on a chair leg and began chewing on a kitchen cupboard door.   I could feel the fumes coming over the phone as she finished telling me this.  So, of course, I had to go.  I arrived later that afternoon.  Knowing that animals often react to changes, I asked her what was different in her life.  “Nothing ” was her first reply.  This is typical of what many people say until they give the question more thought.  She had recently changed her schedule.  She was now working from home in her downstairs office.  It hadn’t occurred to her to tell Maxi that she was no longer leaving the house in the morning to go to work and that her home office would be her new place of work.  Maxi wasn’t used to being left in his cage when she was home.  She hadn’t bothered to explain why she wasn’t letting him out of the cage.  She didn’t want him distracting her, but hadn’t thought it necessary to tell him.  No wonder he was confused and mad.  That explained why he was acting out, protesting to get her attention. As I continue talking with this client,  I notice that Maxi was sitting  to my left on a perch outside of his cage, and she was on my right.  Suddenly I hear him telepathically telling me that she gives him ice cream.  “You give him ice cream?” I asked her. “Yes but only a little.  It isn’t good for him” she said.  Maxi came right back with his retort. “She is stingy.”  I started laughing,and asked the client how much ice cream she gave him.  “I give him a quarter of a teaspoon of vanilla ice cream.”  I laughed some more.  Of course she was stingy.  This parrot sees the half gallon of ice cream come out of the freezer and watches his human take a teaspoon, and give him a quarter of that small spoon!!!

Written by Northwest people (business and personal) and pet intuitive Faye Pietrokowsky.  She works with individuals and  businesses in-person, via email or on the telephone. Some of the issues that she assist people with include: contacting deceased people and animals, missing pets, human and pet behavioral issues,adopting a pet, hiring staff, career decisions, relationship issues and more. For more information, visit her website at www.inner-design.net. She can be reached at (503) 221-2123