Harmony in a House of Cats 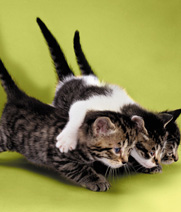 Cats are like potato chips. Stopping at just one isn’t easy. On average, cat owners have 2.4 cats, according to the American Pet Product Manufacturer’s Association.

“Living with other cats is stimulating and overall a very good thing,” says veterinary behaviorist Sharon Crowell-Davis, DVM, professor at the University of Georgia College of Veterinary Medicine, Athens. “Preconceived ideas about cats being solitary are simply not true. Cats are social and enjoy the company of their own kind. We’ve shown in our research of feral and stray outdoor cats that they often form complex social groups. They groom one another, pay attention to one another and play together; they wouldn’t do that if they were solitary.”

Dr. Crowell-Davis says people all too often have a single cat, and eventually decide to get a second cat maybe when that single cat is five or six years old. And all that time that cat hasn’t been exposed to other cats.

“A cat that isn’t accustomed to its own kind becomes socially incompetent as an adult,” she says. “But then, if a child grows up without going to school and being deprived socially, wouldn’t the same thing happen? Social behavior is greatly learned.”

Dr. Crowell-Davis is among those who encourage shelters to adopt littermates in pairs or even three at a time, depending on the existing pets in the family. She says, ideally, adopt a Queen (mother cat) with two of her offspring. “Our research indicates those kittens will grow up to be confident and stable, assuming the mother is reasonably confident and stable.”

The trick to harmony in multi-cat homes is a slow and gradual introduction of any new cats. Dr. Crowell-Davis says, “You don’t just assume any two people who have never met before will get along. Why make those assumptions with cats?”

When they do meet, use really great tasting food as a sort of payoff. “Give the cats a reason to like one another,” says Amy Shojai, author of PETiQuette: Solving Behavior Problems in Your Multi-Pet Household (M. Evans and Company).

“Understand how cats use space,” adds Debra Horwitz, DVM, a veterinary behaviorist based in St. Louis, Mo. “Cats use vertical space. So, try to offer places for them to climb. And soon, each cat will have their own preferred places, some shared with other cats and some not.” Resources, like food bowls and litter boxes should be kept in various places in the house rather than next to one another.

“Say you have two cats and two or three boxes — which would be the right number of boxes — but the issue is that they’re all in one room,” Shojai says. “The more dominant cat might intimidate the other cat from using the boxes just by sitting in the hallway. I call it playing poker — just a slight glance or simply the presence of one cat might threaten another. Litter box indiscretions are the number one concern in multiple-cat households, but they can often be avoided by locating the boxes in different places around the house.”

Shojai says the same goes for feeding cats. Traditionally, owners separate cats from one another at feeding time to avoid problems, or they try to. The problem is that they often don’t succeed. Following advice of the behavior experts, the idea is to set up at least as many feeding stations as there are cats in the home — and then let the cats “hunt” for their food.

“Our lives our so busy. If you have three cats, try feeding three different diets — it’s not easy,” Shojai adds.

However, even if you feed your cats the best possible food, and follow the advice offered from behavior experts, the straight truth is that you can have too many cats. “Living in our homes, cats don’t have an option to come and go from the group as they please,” says Dr. Horwtiz. “Consider if all the cats have a regular opportunity to interact with the owners. There should be time for every cat in that home. And every cat requires easy access to resources.”

“Your wanting to rescue cats in need means your heart is in the right place,” says Shojai. “But if you have a home filled with spraying cats, it means they’re not happy. You might have too many in one place. While there’s no limit on your love, there may be on finances to properly care for the cats, or for allotted space in your home. My general rule is no more cats than the number of rooms in your home.”

“Most people don’t go overboard,” adds Dr. Horwitz. “And I’m glad that most homes have more than one cat — it is best for the cats.”