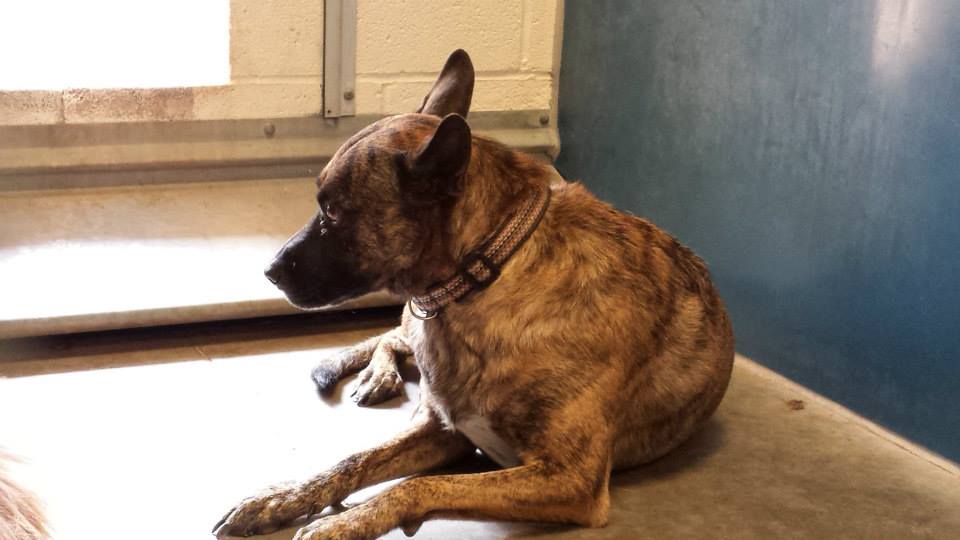 There isn’t a need for words when you look at this photo, but I’m going to write a few anyway. Not because it’s my job to do so, but because I would feel that I had betrayed this dog if I didn’t take a few moments to put pen to page.

In this picture, you’ll see a cattle dog. The papers at Animal Control say she’s a six-year-old Australian Cattle dog mix. Her intake date was 7/14/13 – about a week after the 4th of July – the busiest time of the year for any animal-related organization. This dog wasn’t lost; she was surrendered by her owner. At the worst time any owner could ever surrender an animal.

I don’t know the circumstances of the surrender – those are rarely mentioned. But, this time, the intake officer Animal Control wrote down her name.

The notes that are penciled in beside her name say she is in shock. No one really knows how long her owners had her before they decided they couldn’t be bothered with a dog anymore. They didn’t leave a note. They didn’t offer a reason for giving her up, and it’s not required that animal control ask or reveal the answer if it’s provided.

Pay the fee, leave the animal.

This dog is probably going to die in the next few days because she won’t make eye contact or eat or drink.

Instead, she has retreated to some deep place inside of herself, maybe thinking that if she doesn’t look at anyone or anything, she’s not really there.

She is probably feeling a bit humiliated – wondering what kind of bad dog she was that someone she relied on and likely cared about, would leave her with complete strangers, in a crowded, hot shelter, in the middle of Arizona, during the worst time of year you could ever abandon a dog.

We don’t know what type of home she had. She may have had a very loving home, maybe she was once owned by someone who adored her but circumstances forced them to give her up, which would be all the more tragic. Maybe a parent decided they couldn’t deal with her and a kid, maybe it was a divorce and they couldn’t decide who got the dog, so they just left her. Maybe she ate a pair of shoes, or perhaps she wouldn’t walk on a leash. There’s probably a reason.

There is always a reason…

Because she won’t look at anyone and she’s too depressed and withdrawn to respond, she has been short listed to the kill list in an already full shelter. She’s going to spend her final days in the heat, surrounded by hundreds of other animals that have been tossed aside.

Some of the others are going to be okay; probably the young, small dogs and the tiniest kittens. They’ll be okay because they are cute and uncomplicated. They haven’t been scarred by life. They don’t require work.

But one day, they may find themselves back in the shelter. When they aren’t as adorable. When they have eaten a pair of shoes.

This one, #A3324890 AKA “Pistol” will not be okay. She won’t be okay because she is too afraid to respond to those trying to help and there are others who will. There are so many others who aren’t afraid to bark or do a trick or climb on someone’s lap.
But not Pistol.

If you have any thought of adopting a dog or cat, I urge you to go down to Animal Control and adopt one today. Right now. If you have any extra cash, call up your local animal rescue and make a donation.

Pistol is only one of thousands of dogs who are feeling to betrayed to respond. To deceived to wag their tail. To terrified to make eye contact.

There are rescues who specialize in these dogs and if you don’t feel like you can help by adopting or fostering one of these animals, please donate to a group who will.

[note type=”success” icon=”yes”]UPDATE: We are very happy to report that after this article ran, MCACC received dozens of calls to save this dog. At last count, four separate rescues have stepped up to take her on. Since she was on the E-list, only a certified animal rescue is able to pull her, which they have done. We will be keeping you updated on her journey as she gets through rehabilitation to overcome her fear, and finds a new family who will never abandon her again. Thank you for your support in saving this dog – and please remember, there are millions of other animals just as afraid as she is. Whatever you can do to help is appreciated – and there is a lot you can do to help from fostering, adopting, donating, volunteering, and transporting.[/note]