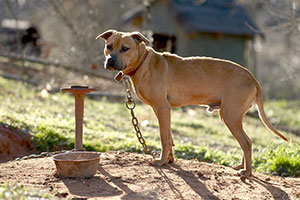 April 8 is National Dog Fighting Awareness Day and we can’t think of a better way to spend a day than talking about this important topic.

Dog fighting occurs in every corner of the world and has a long and sordid history – you know what they say about history. If you don’t learn from it, you’re bound to repeat it.

This year, we are participating in a Google+ hangout that will be moderated by Dan Harris from ABC News – we hope you will show your support for stopping the horrific practice of dog fighting by joining in the discussion.

The Hangout will discuss the issue of #dogfighting , the +ASPCA’s efforts to tackle this brutal crime and what people can do to help. We are also giving away a kit that will help you make a public statement against fighting. Read on!

As part of National Dog Fighting Awareness Day, the ASPCA will feature an interactive information and advocacy center on ASPCA.org that includes:

The goal of National Dog Fighting Awareness Day is to elevate the perception of dog fighting from an isolated criminal act to a deep and persistent stain on our national character.

The more we can bring awareness to the public about these cruel animal practices, the more of a chance we have to fight it. Not everyone is aware of the horrific nature of dog fighting and the prevalence of this crime in the U.S.

In celebration of this event, we’re giving away a special anti-dog fighting kit. Fill out this form to enter.

Henry Bergh, founder of the ASPCA, was repulsed by the brutality of the dog fighting he saw in New York and revised the state’s animal cruelty law in 1867 to make all forms of animal fighting—bull, bear, dog and cockfighting—illegal for the first time. Today, the ASPCA continues to tackle the illegal underground world of dog fighting rings through investigations, law enforcement training, legislation, advocacy and rehabilitation of #dogs seized during dog fighting raids.