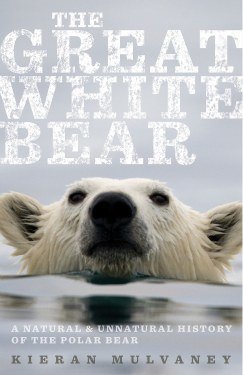 This year, nobody needs to remind you that it’s winter.

If you don’t live it first-hand, you hear about it: mountains of snow, frozen cars, winds that cut sideways and cold air that literally takes your breath away. Yes, it’s winter.

But look on the bright side. It might be cold, but at least you can walk around outside without worrying about being killed and eaten. You don’t have to keep your eyes peeled for creatures that are almost taller than a house, either. Read more about it in “The Great White Bear” by Kieran Mulvaney.

It’s hard not to love the idea of a polar bear. It’s big and snuggly-looking with black eyes and fat padded paws. The cubs are beyond adorable. You wonder if their fur is as soft and cuddly as it looks.

Finding out is not recommended. When was the last time you hugged a 1,700-lb (773 kg) creature with canine teeth?

While on an expedition to study what Norwegians call Polarbjorn, author Kieran Mulvaney writes that polar bears are walking conundrums: their skin is black, but their fur appears white. They are fierce, confident predators that seem to be fearless, but fear a creature they could – and do – just as easily eat. They live in on ice, but keeping warm isn’t their problem; keeping cool is.

Baby Bears are born in snow-packed dens that their mothers dig each winter. Before she does that, Mama Bear packs on the pounds by eating fat-rich seals because, as soon as she seals the den, she won’t eat until the cubs are weaned – which could take eight months. When they emerge in the spring, Mama is understandably hungry and she immediately starts teaching the cubs – who will nurse for two years – to hunt.

The problem is that without ice, polar bears have fewer places to hunt and give birth. Already, bears are a problem in some Alaskan and Canadian cities where it’s a necessity to be aware and stay one step ahead of a hungry bear that’s also wicked smart.

And though some reports are that bear population is thriving, most scientists say that wild polar bears won’t make it to the next century.

“Polar bears are creatures of the sea ice,” says Mulvaney. “If it disappears, so will they.”

So what can be done about it? Well, it’s always good to be armed with information, and “The Great White Bear” is a pretty good place to start.

Bundled-up and very wary, author and journalist Kieran Mulvaney spent time aboard icebreaker ships and in giant wheeled “cabins” meant expressly for bear-watching, as he studied the enormous carnivores. I liked the way Mulvaney weaves science and ecology with biology without making any of them seem stuffy. I liked the way his descriptions of the bears’ environment made me want to put on a heavy coat.

Not just for those concerned about the environment, “The Great White Bear” is also good for animal lovers and science readers. If that’s you, chill out with this book soon.