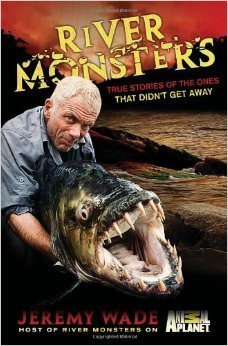 You really need to get to the bank this week.

You have a deposit to make and if it’s a good day, you’ll also make a withdrawal. You would, in fact, go to the bank every day for the rest of your life if you could. Then again, fishing from a boat rather than the river bank might be fun, too.

If you’ve ever drowned a worm, you’ve undoubtedly got plenty of One That Got Away stories. But how will they compare to the fish you’ll read about in “River Monsters” by Jeremy Wade?

At somewhere around age eight, Jeremy Wade threw his first worm in the water and thought fishing was pretty okay. Later, though he had an interest in fish and a degree in zoology, he “wandered lost for several years”, working as a teacher and performing minimum-wage jobs.

And then he found a magazine article about fishing in India. He suddenly realized that his fascination with fish could pay the bills. He wrote a few articles, was discovered by a London television producer, became a TV star and eventually got his own show on Animal Planet.

In this book, Wade writes about some of the more memorable fishing expeditions he’s ever made – but these aren’t your father’s little jaunts down the creek.

On his first visit to India, he became fascinated with the goonch, a fish that was said to swallow humans. Surely, at over 200 lbs., goonches were capable of doing that, but would they? Wade learned to hold his breath and slow his oxygen consumption, and dove into the Ganges to find out.

Wade found vicious salt-water sharks in fresh water. He caught river stingrays that could cause painful injury to a fisherman merely by brushing against his hand. He searched U.S. backwaters for alligator gars that were once “trash fish” but are now protected. And he caught the beauty on the cover of this book, which took him 25 years to do…

Is a bad day of fishing better than a good day at work? Then you’re going to love spending a day reading “River Monsters”.

In the spirit of Philip Caputo and Teddy Roosevelt (the latter of whom he cites often), author and TV host Jeremy Wade tells stories of adventure, danger, and landing dream fish in locations that few non-natives have seen. Readers will enjoy his vivid (and humorous) descriptions of lands he’s visited and risks he’s undertaken in his travels.

Wade continues the excitement by adding a little autobiography, easy-to-comprehend science, a touch of history, and tales that are not a bit fishy.

Fisherman or not, I think you’ll enjoy the thrills you’ll find in this book. “River Monsters” is easy to get hooked on – you can bank on that.

The Shaman’s Guide to Power Animals

Dogs & Their People – A Book Review

Esther the Wonder Pig: Changing the World One Heart at a Time
PetsWeekly, 2021 ©All rights reserved.