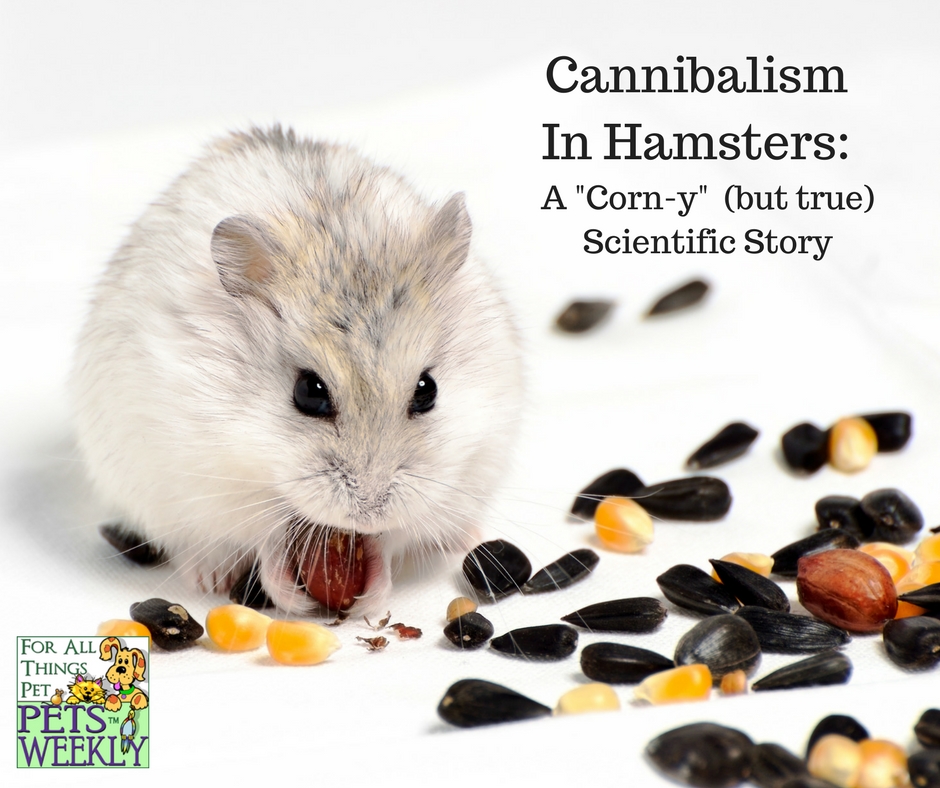 I want to start out by saying I am by no means a food snob. I feel like we all do the best we can with the means we have available and while I’ll do my best to guide you to a quality diet that will most benefit your pets,

I’ll never lecture you for what you’re feeding.

Okay – I take that back – there is one exception to this rule: If you’re feeding a vegan diet to cats, then you’ll WISH you had entered the 7th circle of hell by the time I get done with you. Carnivores need carnivorous diets. If you don’t like that, or you can’t do that, don’t get a cat as a pet. Get a bird. Or a horse. Or a cow. There are lots of herbivores that need homes.

But, other than that important exception, I don’t judge…

Recently, there was an important discovery made about hamsters and this applies no matter WHAT species you feed and we want you to know about it.

Before we begin this interesting and engaging story, I’ll tell you straight up that we feed our dogs Force from The Honest Kitchen. There are a few reasons for this, but the most important is that one of my dogs become aggressive and unstable when he’s on a grain-based diet. That’s a fact. If you don’t believe me, come on over and take him off his food for a few days – you’ll see… Also, our dogs become “yeasty” (by the way, these 4 Bath Salts May Benefit Your Pets) and develop skin problems if they’re fed grain.

For those who doubt my claim, I now have scientific evidence, that corn not only makes unhealthy, but also a bit insane. In fact, “…improperly cooked maize-based diets have been associated with higher rates of homicide, suicide and cannibalism in humans.”

In Europe, there’s a specific type of hamster called Cricetus cricetus (yes, really, that’s really what they’re called – they are also known as the Eurasian hamster, black-bellied hamster or common hamster) and these little guys are critically endangered.

The interesting thing is that these little guys are pretty active breeders, which makes their endangered status suspect. French researchers, led by Mathilde Tissier at the University of Strasbourg, set out to learn why they aren’t doing well and uncovered some fascinating information…

Traditionally, these wild hamsters lived peacefully on a diet of grains, roots and insects. They loved wide, open fields and would tunnel beneath these places, living peacefully in their little hamster colonies, minding their own hamster business (which I suspect meant foraging for food, arguing with their hamster spouses, and maybe enjoying a little TV after a hard day at work). They raised adorable hamster pups and probably even created a well-established hamster democracy where they decided what to do that day, who would hunt worms, who would gather herbs, who would watch over the pups, etc.).

My point is, they were quite content being harmless little hamsters; until one day they weren’t. On that fateful day, they began eating their young instead of raising them.

At first, scientists assumed it was due to humans destroying their native environment. After all, humans had tilled up the hamster’s natural habitat to create vast planting fields for planting crops, and within months, miles and miles of corn grew over the hamsters homes.

It was around that time that the hamsters started losing their minds.

Originally researchers scratched their head at the unusual behavior and rapid decline in population, which catapulted them to the critically endangered list. 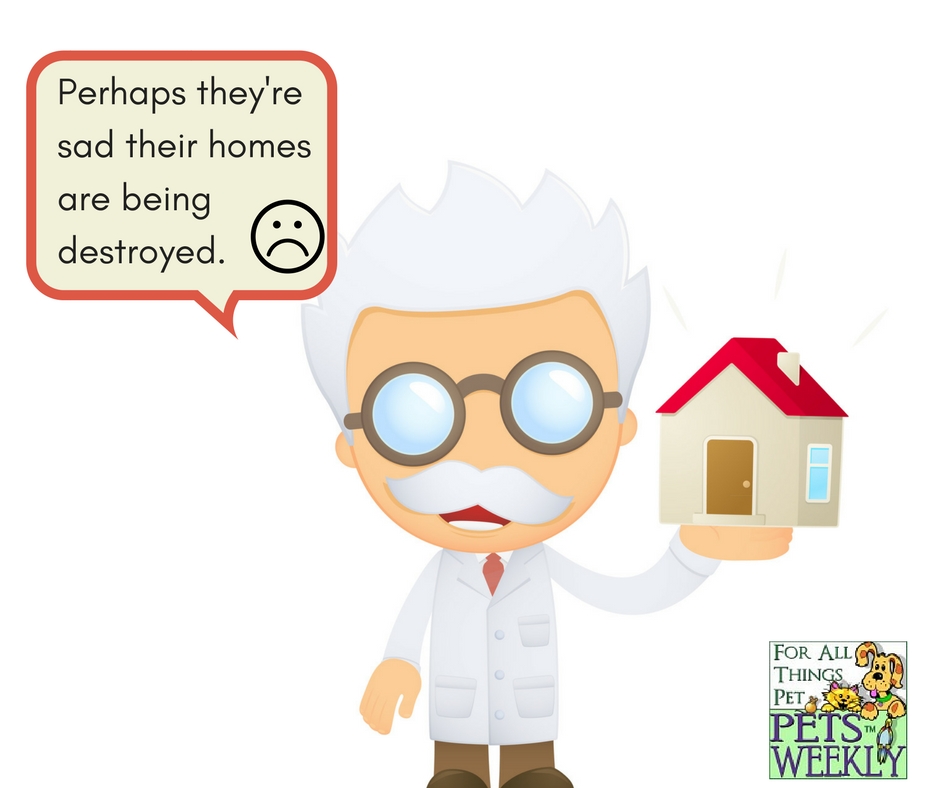 Scientists thought, Of course these hamsters must not be breeding; after all, we introduced pesticides, plowed their homes, planted crops in their hibernation area…who would want to breed in those conditions?!

So they studied the effects of farming on these hamsters to see what they could do to help. As it turns out, farmers don’t care about destroying hamster families because they have their own families to feed, and anyway, the scientists couldn’t specifically define that this was the cause of decline. Hamsters were still breeding the same number of pups, and all seemed to be okay. Yet, the hamster populations were still in rapid decline.

And then one day, a scientist saw a hamster eat a baby hamster.  Then the hamster ate another.

So, the scientists looked a little closer and noticed that the mama hamsters had begun storing their young right next to all the corn they had collected for winter and thought, “Well, that’s odd… Why would they store their hamster babies with the corn they gathered?”

And then they saw the hamster eat another little hamster baby and suddenly understood the hamsters were storing their babies next to the corn. Because cannibalism. that’s why…

[blockquote cite=”Mathilde Tissier” url=”https://www.theguardian.com/world/2017/jan/28/frances-wild-hamsters-being-turned-into-crazed-cannibals-by-diet-of-corn” italic=”yes”]“Females stored their pups with their hoards of maize before eating them,” the scientists reported. “Pups were still alive at that time.”[/blockquote]

But the cannibalism is not something these little hamsters did in the past.  So the scientists set up a series of lab experiments and split the hamsters into two groups:

The results were pretty stunning and I’m going to give you the short version (because this has been a really long story). 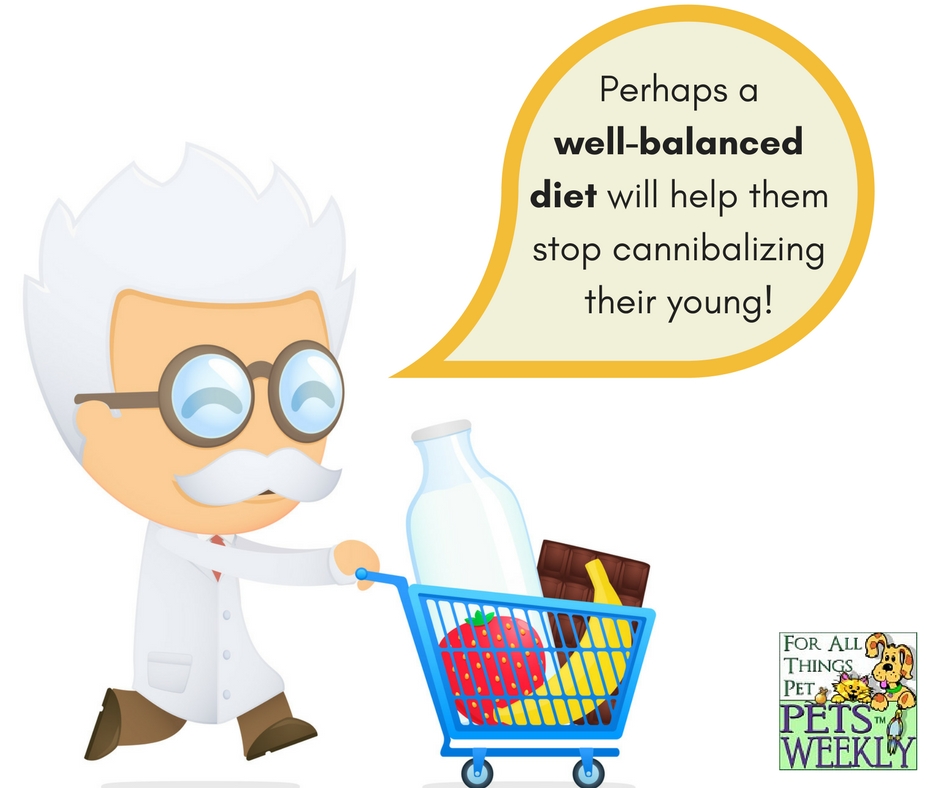 That’s 80% who were eaten alive by their mothers. If you had five apples and ate four of them, that’s how many babies were eaten by their moms.

Now the wheat group was not without fatalities. Even the hamster world is fallible and subject to the occasional infanticide. But, those mothers ate slightly less than 5% of their pups. Maybe they had an off day, or perhaps the pup was whining a bit more than normal, the mom could have been temporarily insane – I don’t know all their reasons. I do know that no species is without issues.

But to cannibalize FOUR out of FIVE pups? That’s a lot…

There were other symptoms of insanity as well. “The cannibal mothers showed other signs of abnormality. The usually cute-and-cuddly hamsters ran in circles, ‘climbing and pounding their feeders,’ when scientists entered the room,” reports The Guardian.

There were other problems too. The females had dark, swollen tongues and blood so thick scientists couldn’t even draw it for samples.

This is an issue we’ve seen in dogs. It’s called “Black-Tongue Syndrome” and in humans, “3-D Disease” (or Pellagra), which stands for Diarrhea, Dementia and Dermatitis.

Just sayin’, if you’ve been prone to eczema, this may be part of the problem… but maybe you’re not bothered by dementia, dermatitis, diarrhea or eczema. Perhaps Black tongues don’t bother you. Well, this might:

“Pellagra is thought to have decimated some three million people in North America and Europe from the mid-18th to the mid-20th century.”

Further study revealed the problem – it was all due to a lack of vitamins- a deficit in B3 (niacin) to be exact.

You may still be doubting this potential problem… “Nonsense,” you say. “I’ve been eating corn for years and look at me? I’m the picture of perfect health!”

Maybe. But then again, corn may also explain a few things I’ve been wondering about – like the behavior of our country, individuals who abuse or abandon animals, certain politicians who shall not be named, and why the world seems so crazy these days.

I’m not saying that corn is the reason, I’m just saying it’s important to look at cause and effect…

The good news is that when scientists introduced a balanced diet back into the hamster diet: cannibalism stopped. The crazy behavior stopped. I’m betting that the little hamsters even felt bad they ate their little babies and probably wish humans would stop interfering in their lives. Of course, I can’t be sure…

[blockquote cite=”Baumgart” url=”https://www.theguardian.com/world/2017/jan/28/frances-wild-hamsters-being-turned-into-crazed-cannibals-by-diet-of-corn” italic=”yes”]“Monoculture in agriculture is really bad for biodiversity,” said Baumgart, who has been fighting for years to protect these endangered rodents. “Now we need to take concrete action.”[/blockquote]

The moral of this story, and the reason we’re covering it is because you could also be seriously impacted by corn. And corn is everywhere. It’s in alcohol, syrup, brown sugar, baking soda, Vitamin C, even vinegar. It’s in hundreds of dog foods and cat foods.

All I’m saying is, watch what you eat; be very aware of what you feed your dogs and cats and hamsters.