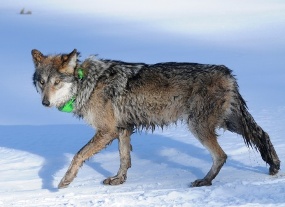 Arizona’s newest addition to the Blue Range Wolf Recovery Area in the Apache National Forest, is reportedly adjusting well to the changes. The new pack member replaces an alpha wolf that was illegally shot and killed in June, 2012. There is still a reward offered for information leading to the capture of the individual(s) who committed this crime.

M1133 was brought by snowmobile to the release site by the Arizona Game and Fish Department and U.S. Fish and Wildlife Service and hard released (released directly from the transport crate upon arrival rather than being placed in a temporary holding pen in that area for a period of time to acclimate). M1133’s release was adjacent to the Bluestem pack’s territory in hopes that it will replace the pack’s breeding (alpha) male that was illegally killed in 2012. Surveys were conducted prior to the release to ensure that the Bluestem pack alpha female had not paired with another male wolf. The release was timed to coincide with normal early-season breeding activities. The Bluestem pack currently consists of four collared wolves, including the alpha female and three pups born in 2012. At least three uncollared wolves have been documented with the pack, likely a yearling and two additional pups from the 2012 litter. 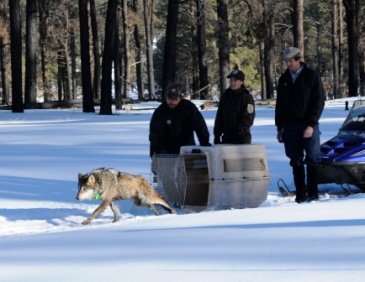 M1133 was born in captivity in April 2008 and was transferred to the Sevilleta Wolf Management Facility in December 2008 along with his parents and littermate. He was prepared for the release and transported from Sevilleta to Arizona.

The release of M1133 is considered an initial release rather than a translocation because the animal was born and raised in captivity. A translocation, such as the two conducted in January 2011, is when a wolf that was born in the wild, but brought into captivity for some reason, is then released back into the wild. The field team closely manages all initially-released wolves to reduce the potential of nuisance-related behaviors and livestock depredations once they are in the wild. Since M1133 is wearing a radio collar, biologists will monitor the animal closely to reduce conflict with livestock or human activity in the Apache-Sitgreaves National Forests.

All initial wolf releases occur in Arizona in the primary recovery zone of the Blue Range Wolf Recovery Area in compliance with the existing federal 10(j) rule covering the reintroduction project. The last initial release of wolves occurred in 2008.