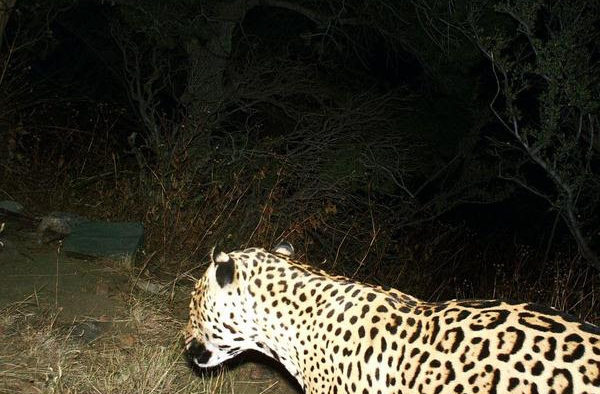 We really do try avoid the chaos of politics on this pet-centric website (although my personal page is another story).

But eventually, to not make a comment on an issue that severely impacts endangered species, wildlife, pets or any animals, is just reckless and irresponsible. The planned “border wall” is such an issue.

Let me start with some good news…

We’re very excited that a jaguar was photographed in the Dos Cabezas mountains (about 60 miles north of the US-Mexico border) this week. This is the third Arizona jaguar that has been seen in the state of Arizona since 2011 and this sighting is known as the Dos Cabezas jaguar.

While the image was taken on Nov. 16, 2016, in the Dos Cabezas Mountains (about 60 miles north of the U.S.-Mexico border); the camera data was only recently retrieved. This is the only jaguar photographed by this BLM-deployed camera since it was installed in August 2016.

The jaguar has been protected under the Endangered Species Act since 1997.

The Dos Cabezas jaguar is the third jaguar photographed in the southeastern Arizona region since September 2012.

Prior sightings of different cats include a jaguar photographed by trail camera in September 2012 was first observed in the field and photographed in November 2011 in the Whetstone Mountains.

A male jaguar (called El Jefe) was repeatedly documented in the Whetstone and Santa Rita Mountains 2011-2015, and one other male has been twice photographed in the Huachuca Mountains in December 2016 and January 2017.

Then there was Macho B, the jaguar who died after an AZ Game and Fish researcher illegally baited and trapped the big cat, resulting in their suspension in early 2010.

Yet, despite more frequent photographs of the elusive animal, we’re still not seeing evidence of a climb in the population.

“Jaguars are a historical component of Arizona’s wildlife diversity,” said Jim deVos, Assistant Director for Wildlife Management at the Arizona Game and Fish Department. “However, given the irregularity with which jaguar presence in Arizona is documented, even with the expanded use of trail cameras, this sighting is not an indication that jaguars are establishing a population in Arizona.”

Which brings me to the point of this article, the infamous “border wall”.

Jaguars, ocelots, foxes, cougars, wolves, wild horses and burros, along with thousands of other animals (both endangered and not) travel the border between Mexico and the United States, migrating to seasonal water holes.

If you don’t live in the desert, you probably don’t know how precious water is, but we live here and we know.

The Impact on Endangered Jaguars

This is just one reason why we vehemently oppose the construction of a wall along the border. Construction like this would have the immediate effect of driving these jaguars from their homes and eliminating their ability to access watering holes, which are few and far between in the vast Sonoran desert.

“Since 2012, an increase in trail camera monitoring of mountainous habitat in southern Arizona has provided increased documentation and a better understanding of jaguar presence and habitat preferences,” said Steve Spangle, U.S. Fish and Wildlife Service’s Arizona Field Supervisor. “This supports the phenomenon that jaguars seeking territories outside of competitive breeding areas in Mexico continue to occasion Arizona.”

Scientists, biologists and wildlife experts, as well as millions of American citizens, are increasingly concerned that a border wall may become a reality.

The net effect would be a loss of wildlife, the destruction of our incredibly beautiful (yet very fragile) desert, and increased heat as the wall traps energy.

“In terms of climate adaptation, building a border wall is an act of self-sabotage,” Dan Millis, a program manager with the Sierra Club’s Borderlands project told Scientific American. “And the reason I say that is we’re already seeing wildlife migrations blocked with the current walls and fences that have already been built. We have hundreds of these walls that were built without dozens of environmental protections.”

These cats have been listed as endangered since 1982 under the Federal Endangered Species Act. Since being listed, ocelots have only rarely been seen in Arizona.

Only one other ocelot, an animal run over near Globe in April 2010, has been confirmed in Arizona since the mid 1960s.

One other ocelot was reportedly captured on film by the Sky Island Alliance in November of 2009; however, it has not been possible to fully verify the species or the animal’s origin based on that photo.

According to data provided by the United States Fish and Wildlife Service (USFWS):

A wall would affect at least 89 endangered or threatened species, 108 species of migratory bird and four national wildlife refuges.

“BLM managed public lands in the vicinity of the Dos Cabezas Mountains provide an important wildlife corridor and landscape linkage to the northern end of the Chiricahua Mountains,” said BLM Safford Field Office Manager Scott Cooke. “We are excited that we were able to document the jaguar utilizing public land and are pleased to share that information with our partners at the Fish and Wildlife Service and Arizona Game and Fish Department.”

How You Can Help

Please, contact your congressional representatives and let them know that this is a huge concern – that erecting a wall is a reckless expense that endangers the lives of animals throughout the desert. It will destroy our desert and the net effect will not be keeping people out of the USA, but seriously endangering animals.

Over 40 percent of illegal immigrants arrive by air, only a very select few brave the dangerous desert to find their freedom. Please let your representatives know that there are far more effective options: Drones, video monitoring, super-light planes, robotics. Each of those options are much less expensive and far more effective than an expensive, massive wall.

See for yourself how important this issue is by viewing the lives you will save – automated camera photos of jaguars and ocelots in southern Arizona (including the referenced BLM photo) are posted on the U.S. Fish and Wildlife Service Flickr page.

Tags
Previous Article
Roadie: The New Uber For Pets
Next Article
Getting Your First Goldfish: Things You Should Know