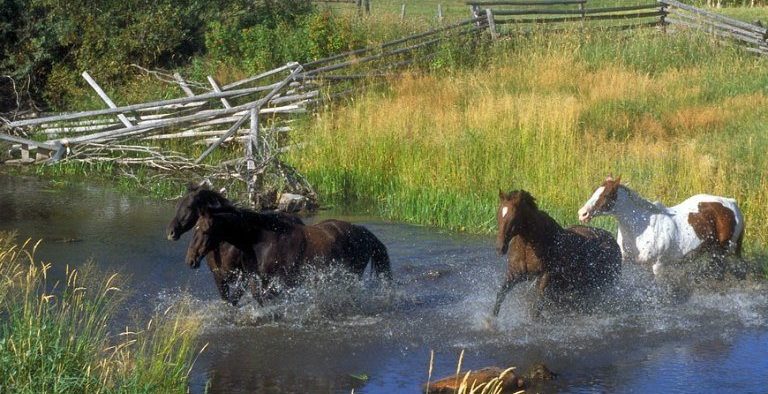 Off leash dogs are an ever-present issue in many communities. While I have seen posts on Facebook and in online horse communities, it really came home for me when I was out and about in the neighborhood with my appaloosas.

The horses were both walking quietly on lead ropes, and all of us were happily enjoying the outing in the late evening. Not far from home, suddenly someone opened their front door and a pack of 5 dogs came exploding out at us, barking, led by a 100-pound German Shepherd.

My mare was closest and she shied sideways into the old gelding, who went down to his knees then got up and splayed his feet as he tried to process what was going on since he couldn’t actually see where the dogs were. The mare nearly knocked one of the dogs out as I was yelling “Call your dogs back!” at the top of my lungs.

I heard a soft reply, “Is there someone out there?”

“Yes!” I bellowed. “Call your freaking dogs back before they get my horses!”

This is just one situation, there have been many others, one that prompted the owner of PetsWeekly to write another piece about Dog Etiquette: Leashes.

The Dangers of Off-leash Dogs

While this situation ended without bloodshed, it could have been much, much worse. The dogs were let out onto a yard with no fencing, and the owner didn’t so much as glance out the door or she would have seen the large animals with bright white butts, and reflective vest on myself, and reflective products on the horse’s legs.

It was barely dusk and not very dark at all, all she had to do was check before flinging open the door. That situation was upsetting to me, the horses, and to the clueless dog owner. It so easily could have been worse. For example, in this state and many others, it is legal to shoot and kill a dog that is “harassing livestock”.

Many people think that just because of their size, horses won’t be scared of a dog. This is completely untrue. Horses are prey animals. That means when something is acting like a predator, thousands of years of instinct tells them to do one of two things – Fight or Flight.

If a horse runs, a rider can be thrown and injured, as in the case of a friend who was thrown from his horse after being harassed by a several dogs who had been allowed to run loose. In that case, only quick action saved his life after he sustained a serious head injury from both the fall and the dogs.

The horse could spook, run into the road and injure both a motorist and themselves, or the horse can be injured simply by running blindly with fear. I

Dogs are predators. Their behaviors towards animals like horses are that of a predator.

Here are some clips from rider helmet cams showing these very behaviors and some of the dangers both horses, riders, dog owners, and dogs can face:

If you watch in some of these videos, you can see the dog going for the hind end of the horse, just as a wolf might hamstring its prey to bring it down. While this instinctual behavior is totally normal; it is, rightly, threatening to the horse.

Even if the dog isn’t intending to bite, it is still a threatening behavior. The loud barking, signals excitement, which again, the horse perceives as a threat.

Not Just Horses Are At Risk

It’s not just horses that can be at risk. A friend of mine was walking her dogs a year or so ago, with her baby in a stroller. An off-leash dog attacked her dogs. This dog’s head was at the same level as her baby’s face in the stroller. One of her two dogs was harmed, and she had the incredibly difficult task of trying to break up the fight while keeping her baby and dogs safe.

After the dogs came charging at my horses, I couldn’t help but wonder – what if it had been a family walking their own dog? What if it had been a child riding by on a bicycle? Children have very prey like behaviors, especially when scared. What if the child ran? Screamed? The dogs were already behaving in an aggressive fashion, and in a pack – what if their prey drive had been triggered as can happen when the “prey” runs? The situation could have gone from bad to worse in a heartbeat. I’ve seen it happen.

I’m not trying to be Mrs. Doom and Gloom here, but it is a real danger, a real liability to the dog owner and everyone that may end up sharing the same space with them.

There is even a town in the Phoenix, Arizona Metro area (Maryvale) that has roving packs of Chihuahuas that terrorize school children and anyone that walks or rides a bicycle in that area. They attack people waiting at bus stops. This is the extreme end of what can happen when unaltered dogs are allowed to run wild and form packs but even one dog can kill a neighbor’s chickens, hurt a child, kill cats, horses, and other dogs.

Dogs Need to Be Good Citizens, Too

It’s so very important that dog owners remember we all have to live in this society, and it’s usually the dog that ends up paying the price. If my dog attacked a child, she’d likely be put down – no matter WHAT the child or a clueless parent had done to create the dangerous situation. At least if my dog was on her leash and a child had come at her, I would have a place to argue from to keep her alive. It’s just good dog ownership to keep your dog in your yard, follow leash laws, and have your dog spayed or neutered.

If your dog is not impeccably trained for off-leash behavior, and sometimes even if they are, you’re creating a dangerous situation for everyone allowing it off leash.

In this case, horses were attacked by dogs in Orange County

In this case, a prized show horse had to be put down after he was attacked by dogs in San Marcos

Out of control dogs are even a danger for the Amish:

Even if your dogs are hunting dogs, they MUST always be under your control. In this event, an investigation is underway after a prized show horse was attacked by dogs:

When your dogs are not under your control, escape from your yard, or create problems for the public, it’s very possible the worst could happen – as it did in this case when a gentleman was forced to shoot two dogs that were harassing a horse. The gentleman at the end of this video sums it up nicely “if the owner had had control of their pets this wouldn’t have happened.”