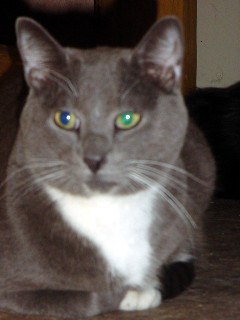 According to NJ newspaper articles, a number of animal activists have contacted state officials in an effort to head off a potential reclassification of feral cats, which could end the growing number of programs that trap, neuter and return them back into neighborhoods or the wild, and allow them to be hunted. The state Fish and Game Council has condemned the idea of leaving cats in the wild and now another committee that reports to the state Department of Environmental Protection is studying the issue of TNR programs.

Fish and Game Council member, Leonard Wolgast, was the sponsor of the resolution and has brought the issue of feral cats up at several council meetings. (Mr. Wolgast also recently supported re-opening bear hunting in the state.) Some animal activists have questioned whether he should be allowed to participate in such discussions at all because he is listed as owner of the East Brunswick property where Blumig Kennel, (which is owned and operated by his wife’s family), is located. That kennel contracts with several communities in Central Jersey to pick up and euthanize cats. **Smells like money!**

Jeannette Vreeland, acting chair of the Fish and Game Council, asked in 2007 if feral cats could be added to the list of animals that could be hunted, according to council meeting minutes. This week she defended the 2007 resolution.

No action by the council is expected before a recommendation from an ad hoc committee of the DEP’s Endangered Nongame Species Advisory
Committee. That group, of which council meeting minutes indicate Wolgast is a member, is looking more closely at TNR programs and is supposed to recommend whether these should be supported or opposed. Its next meeting is in April. **More politics to sway the outcome!**

Steve Austin, Boonton’s Health Administrator, said Boonton’s TNR not only works, but has saved the town money. “Over the past five years, we’ve been able to save the town $19,000,” Austin said, noting the cost to trap, hold for seven days, then euthanize a cat is $95. Often, he had neither the manpower nor the money to do that. Now the Parsippany Animal Support Society uses grant money to conduct the TNR program in Boonton. “It should be our choice. If they are going to make TNR illegal, it’s going to cost us a lot of money,” Austin said.

But David Blumig, East Brunswick’s animal control officer, wrote a letter to the Mount Olive Council as it was considering the issue, saying TNR does not work.

In New Jersey, the animal activists, wildlife supporters and most governmental agencies have been working together on solutions.

“The Fish and Game Council is really an aberration,” Bryan Kortis, executive director of Neighborhood Cats. “They are trying to derail these efforts. Obviously they stand on extremely tenuous legal grounds.”

The activists’ letter states that because the state Legislature has deemed cats to be companion, domestic animals, the Fish and Game Council is prohibited from reclassifying or regulating them.

The state Department of Health and Senior Services has jurisdiction over animal control issues, including stray cats. It has not taken a position on TNR but does talk about managed cat colonies as one solution.

The Sheriffs’ Association of New Jersey discussed the issue this week and plans to join the animal activists in opposing any reclassification of cats that would allow them to be hunted and is asking Wolgast to recluse himself from the issue.

The groups say the Fish and Game Council should back off and not try to fix what isn’t broken. “We’ve seen TNR reduce feral cat numbers and reduce the numbers of complaints,” Lerner said, who works with the Animal Protection League of New Jersey and helped start a TNR program in Mount Olive last summer. “This is really inappropriate for the council.”

ACR is urging our members to write to the NJ DEP and tell them TNR is proven effective; current TNR programs in NJ (and across the US) are reducing feral cat numbers and educating the public on the importance of spay/neuter and keeping cats indoors. TNR also saves states money by not having to hold and kill feral cats; rescue organizations are already using private money to implement TNR programs. If a species needs controlled in order to preserve another, then all humane, non-lethal methods should be utilized. In this day and age, everyone should be trying to instill more compassionate ethics towards the earth and all of its inhabitants. Individuals want to see, demand tosee, an end to the pointless trapping and killing of thousands of
feral cats. Please ask the NJ DEP to help us make a brighter future for feral cats, by supporting TNR.