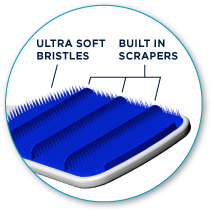 There’s a big difference between dog breath and puppy breath. The older our four-legged friends get, the more difficult it is to deal with their doggy  breath problems. This week, Orapup, a division of Orabrush, Inc. – announced that they have designed a new tongue cleaner that will help cure a dog’s bad breath.

The brush is scheduled to hit store shelves at the beginning of 2013 and will be manufactured in the USA.

Designed by Orabrush Founder and Chairman Robert “Dr. Bob” Wagstaff, the Orapup combines ultra-soft pointed bristles with four in-line scrapers, which collect and remove bacteria from the dog’s tongue. A formula made with all FDA-approved ingredients and developed to help prevent gum disease and reduce tartar is applied to the surface of the Orapup

to entice dogs to lick the brush, allowing them to clean their own tongues. The Orabrush team spent seven months researching and developing this healthy, edible product with a flavor and consistency that dogs enjoy. Studies have shown that in humans 90 percent of bad breath comes from bacteria on the tongue.

“Soon after we launched Orabrush in 2009, many of our customers began asking when a version would be available for their dogs,” said Jeff Davis, CEO of Orabrush. “The Orapup has been near to the heart of our founder Dr. Bob for some time, and was a natural addition to the product line. As we watched crowdfunding become more popular, we recognized how successful it could be to engage the large and growing Orabrush community to bring the Orapup to dog owners everywhere as quickly as possible. Just as YouTube leveled the playing field and allowed a small start-up like us to compete with major brands, crowdfunding will play a similar role with the Orapup.”

The Orapup continues Orabrush’s tradition of product, business and onlineinnovation. After struggling with traditional marketing methods to gain traction with its patented tongue cleaner, Orabrush achieved breakthrough success by implementing its novel “reverse marketing model.” Using this approach, Orabrush succeeded in cultivating a thriving online fan base through the use of YouTube videos.

With more than 49 million channel views, the company has created one of the top subscribed sponsor channels on YouTube – behind brands like Apple and Old Spice – and ultimately transformed that online support into distribution at more than 30,000 retail locations around the world.

Treat Your Cats to Healthy Teeth during #PetDentalMonth
Sponsored February 22, 2015

Treat Your Cats to Healthy Teeth during #PetDentalMonth