I Stole Your Dog Today 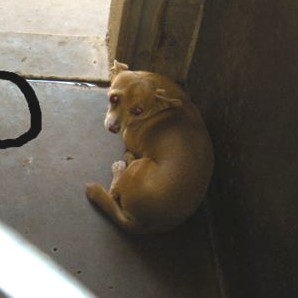 I stole your dog today.

No, I didn’t set a foot on your property, but from the condition of your dog, I can imagine what it looks like…the word “junkyard” comes to mind.

I found her along a road, with a heavy chain wrapped around her neck, still attached to rotten boards from her doghouse, with rusty six-penny nails protruding. Not only did I know that most of the town had already ignored her, judging by where I found her, but I knew that if she had gotten into the woods the “cross” that she dragged behind her would have wrapped around a tree until starvation or thirst killed her. The local populace is usually deaf to the sound or blind to the sight of an animal in need, unless they decide to shoot one for trespassing.

That her ribs showed, that her ears were filthy, that her overall condition was poor and that her coat and eyes were dull, were good indications that you didn’t deserve her. But just to make sure, I checked with the local authorities for a report of a missing (unlicensed) dog matching her description and to see if you’d placed a “lost dog” advertisement in the local newspaper. You hadn’t, which I can only surmise means that you do not miss her. That’s rather convenient, because the fact that she is not spayed, probably unvaccinated, and possibly heartworm positive means that restoring her health could cost me around a thousand dollars.

Perhaps it may be some small comfort to know that she doesn’t miss you. In fact, her very act of escape made it clear that she’d had enough of your brand of pet guardianship. It took her about a day to realize that I’m not you, that I won’t hurt her, that despite our brief acquaintanceship, I love her. It took two days for her to realize that the other animals who live here accept her and that one of the joys she has been missing has been the companionship of other dogs. It took three days for her to appreciate the ecstasy of a homecooked meal and that a couch is meant to be reclined on, and that she no longer has to sleep outside – in fact, when the thunder starts, she’ll get a hug and her ears rubbed, and I’ll make a fool of myself with baby talk.

She has a beautiful name now. Already in the first week she has come to look more like she should. Her eyes sparkle and she has learned to wag her tail in greeting. She has stopped flinching when I make a sudden movement, because she knows now that I won’t beat her, in fact, she rarely leaves my side. She’s even become brave enough to bark at a cat and today I watched from the window as she initiated play with the other dogs. No, it’s clear she does not miss you or her former life of neglect on a chain.

Of all the things that have become apparent from my brief relationship with her – such as the forgiving nature of the dog, their wonderful ability to heal and to trust, the fact that love can work miracles – one of the most apparent is what a fool you are. She was possibly the most trusting, loyal and loving being in your life, and you consigned her to a life of filth and loneliness until she made the best choice she’s ever made when she broke free. Perhaps her guardian angel helped her escape. Lest anyone should mistake me for an angel, I will admit that one day I hope to be as good as she; I believe she forgave you within the first twenty-four hours of her new life for the about four years of her previous “life,” while I still wrestle with the part of me that hopes that one day you will burn in Hell.

It’s not clear yet whether she’ll remain here or whether I’ll find her a loving home where she can count on more individual attention than I can give her, but one thing is certain, this is one bit of stolen “property” who is never returning to you. So sue me, prosecute me, plead with the courts that she is rightfully yours…I’m convinced this is the best “crime” I’ve ever committed. Hardly anything has pleased me more than the day I stole your dog. I need only look into her beautiful brown eyes to know that she’d defend my decision with her life. If we have one prayer, it is that you will not replace her, and if we have one special day to commemorate together, it is the day I stole your dog and the day she stole my heart.