A chain and padlock have shackled the gates to the Phoenix-based training center for the Eye Dog Foundation for the Blind since early October.

The facility, one of only two in the nation dedicated to training German shepherd guide dogs, has all but closed after trainers and other employees walked off the job in a dispute over the management of the non-profit agency.

Those close to the organization say it’s the latest display of mismanagement from the 65-year-old charity that, in the past year, has experienced financial troubles and major infighting among board members.

An attorney for the board said that those issues are behind them and that leadership is working to revive the training center, though no reopening date is scheduled.

In the meantime, volunteer puppy raisers and the blind have banded together to keep the charity’s mission alive.

The organization was founded in 1952 as a California non-profit but for years existed only on paper while leadership collected and invested donations. By the 1970s, the foundation began contracting for the acquisition and training of German shepherd dogs as guides for the legally blind.

Of the 10 million people in the U.S. who are blind or visually impaired, only about 7,000 use guide dogs, according to the American Foundation for the Blind.

There are about 20 guide-dog schools nationwide, most of which train Labrador retrievers. German shepherds are a prized breed of working guide dog, favored for their focus and strong work ethic. 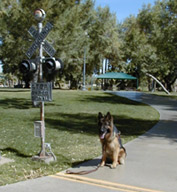 The local organization has paired more than 50 handler/dog teams over the past decade, but it has had legal issues in the past, the first being in the 1980s, when a California judge prohibited the foundation from establishing a training facility in-state. In 1988, the organization purchased a 3-acre parcel on 15th Avenue south of Baseline Road in Phoenix for a training center, while executive operations remained in California.

Legal issues arose again in March, after the six-member board deadlocked over management issues in the wake of its executive director’s resignation. Half of the board members sued to dissolve the foundation.

Joey Etienne, a court-appointed receiver, took over the foundation and found that “there were bills that weren’t being paid . . . and it took us awhile to get the money back on track.”

With a net worth of at least $12 million, Etienne said, the foundation was well-funded, with competent training staff in place. He said some of the board members had been with the agency for many years and had not kept up with modern management techniques.

“Not only did this board need to go away, but the entire organization needed to leave the state of California,” Etienne said. “There was no other nexus other than this was where the money was housed.”

He was also concerned about the foundation’s administrative leadership.

“There needed to be a professional non-profit person running the foundation,” Etienne said. “That didn’t exist.”

But before Etienne’s recommendation was submitted, founder and board member Lequita McKay died, and the suit was dismissed.

In the months following, board member Gwen Brown was voted in as executive director. Vendors began complaining about lack of payment by September; the head trainer, Manny Gonzales, quit, as did the kennel manager. A month later, another trainer and staff member resigned when their paychecks didn’t come through.

Barbara Kuhns, whom Etienne appointed as administrator at the training facility, put the chain and padlock on the gates before she left.

“Non-profits don’t pay a lot, and when you don’t get paid, you can’t live off air,” Kuhns said.

Since the facility closed, three pairings, scheduled for September, October and November, have not occurred.

Anna Thomasson has raised two German shepherd puppies that went on to become guide dogs for the blind. She has been organizing bimonthly meetings for the 30 puppy raisers and their charges since the facility closed.

Trainers used to host puppy classes every two weeks for troubleshooting and obedience work, so raisers have rallied to keep the puppies on track.

“My concern is the dogs losing momentum in their training,” Thomasson said. “Puppies, just like children, have key developmental periods. I think you risk . . . losing the dog as a guide.”

Thomasson said puppy raisers have been connecting “more than usual” by e-mail to keep each other encouraged and motivated. That’s all they can do, she said.

“I hesitate to say we’ve been abandoned, but we have no leadership, we have no direction and we don’t have the professional guidance we need,” Thomasson said. “I wish that I would have received some correspondence or some contact saying, ‘We know there’s no staff here, and we acknowledge you may be concerned.’

River Forest of Phoenix used to take her guide-dog Chili to puppy classes as a refresher. She said Gonzales, the former head trainer, visited her home to work with Chili when the dog was skittish about heavy traffic coming up from behind.

“To be able to call him, have him come out and look at it was good because it saved a great dog,” Forest said. “I just want to be able to get the help if I need it.” With no word from the foundation, she said, she has been left to scour the Internet for resources.

Bob Barta, an attorney for the foundation, would not answer questions about how or if the charity has attempted to communicate with its clients and volunteers. In an e-mail, he said the foundation has been offered assistance from other guide-dog programs and would arrange for someone “who is qualified to call them back.”

Even so, volunteers and clients worry the foundation, long known for its reliable dogs, is developing a poor rapport with the blind community and the public.

Barta said the foundation is interviewing guide-dog trainers and hopes to reopen as soon as possible.

In the meantime, Thomasson said the puppy raisers plan to fill in the gaps.

“The organization only has trouble in the background,” Thomasson said. “It’s about the puppy raisers and the dogs. My personal plan is to continue my commitment to Nisha. I am passionately committed to my dog and seeing it through for her.”

Tags
Previous Article
Is Mint Safe for Cats?
Next Article
You Can’t Save Them All

Why the Removal of USDA information Matters
PetsWeekly, 2021 ©All rights reserved.