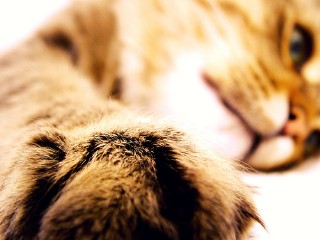 “You can’t save them all…”  My father’s words echoed through my head as I sat in front my computer, searching every website I could find that was even remotely associated with the keywords, “rescue + cat + injured + Arizona”.

Maybe I couldn’t save all of them, but I could damn well try to save this one.

The gray and yellow tortoiseshell cat had wandered in through the cat door as I lie in bed reading. His visits had grown more frequent over the past few weeks, and I could see that his health, as well as his appearance, had been rapidly declining.

Tonight as he wandered in though, my heart skipped a beat, then pounded in my chest as he paused long enough for me to fully observe him.  One side of his face seemed compressed, his right eye now closed for eternity.  His left eye was swollen mostly shut with infection, and he could barely see out of the small corner that remained open.  Large patches of fur were missing from what once must have been a glorious tortoiseshell coat, and what fur did remain was matted together in massive chunks. Gone was the sheen that must have once covered a lithe body.  Now he was gaunt, a ghost of a cat, that had obviously been injured in ways we could only imagine. All that remained now was a sickly feline, one which if successfully trapped, would be immediately destroyed by whoever I took it too for help.

The Humane Society will justify their decision to destroy the animal by saying it is a feral and that they can’t afford the liability of fostering and paying for the animal’s recovery.  They will say that even if they could help it, it would never be adoptable because it was too old and too ugly, scarred from years of defending itself.  Even if I ask them to just give the suffering cat the medical attention it needs, that I will adopt it and see to its care immediately afterwards, they will not allow it – they will tell me that they do not allow feral cats to be adopted.

[blockquote cite=”Ghandi”]”The greatness of a nation and its moral progress can be judged by the way its animals are treated.”[/blockquote]

The Animal Control will justify their decision to destroy the animal by saying that it is a feral cat, and they no longer have funding for the veterinary care of feral cats.  They will tell me that their program was discontinued last year due to a “lack of public support,” something that I already know.  They will tell me that their “free vets” are no longer free, because the tax payers did not want their money spent on animals, they preferred their money go to the pockets of corrupt politicians for fighting some inane battle over whether strip clubs should have stricter ordinances or not.  Worse, some voters just didn’t even bother to show up at the polls at all.  Those are the apathetic people who just don’t care where their tax dollars go.  The good-hearted veterinarians who were once volunteering their services are now so overwhelmed at their own practices with patients who bring in their pets, but then abandon them or refuse to pay the bills, that they can no longer support the city as well. 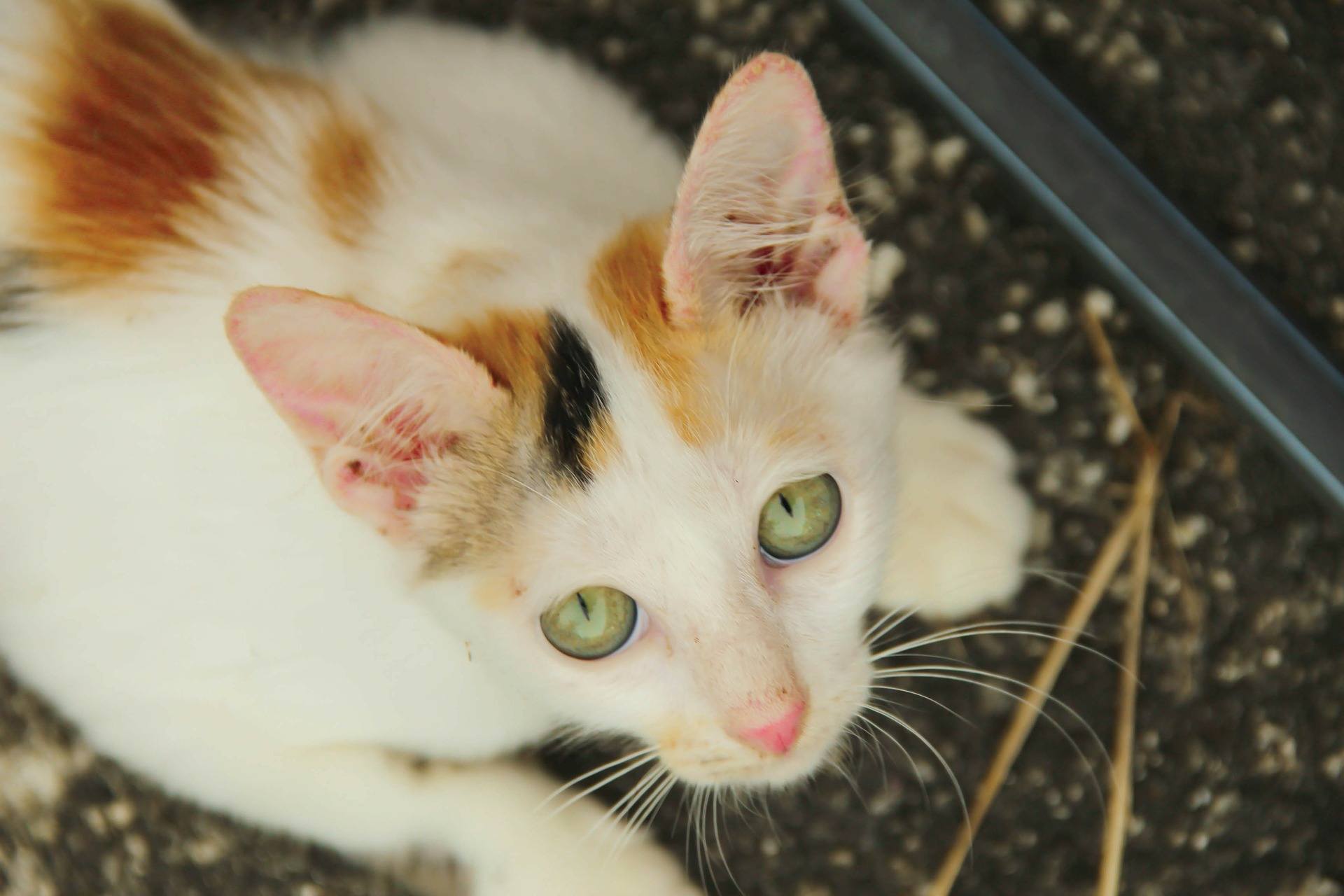 The No Kill shelters would help if they weren’t full, but with kitten season just ending, and the recent string of natural disasters to contend with, they just don’t have room.  The kindest and most generous people in the world operate these shelters and they are near tears after they hear my story.

They explain their situation honestly, telling me what I already know; that too many people out there still refuse to spay and neuter their pets, because they wanted their “kids to witness the miracle of birth.” The litters are then given to a no-kill shelter because these same idiots “couldn’t stand the thought of letting the Humane Society get them because they would be destroyed.” Then, their pets became pregnant again because these so-called “educated” people had no idea that “pets could breed that fast!”

Or worse, they just let the animals run the streets, or they drop them off in a neighborhood because, “animals naturally know how to survive.”

Or maybe, they just decided they didn’t like the pet anymore, or they had a child and the “animal didn’t fit into their family plan,” or perhaps the puppy wasn’t housebroken fast enough. Maybe they obtained the animal then realized their apartment or homeowners association “didn’t allow animals.”

Whatever reason they give they are all the same; they are all excuses.  They amount to immature, irresponsible people.

Well, folks – I got news for you.  The sickly, weak cat that is standing in my closet right now is a perfect example of how well they get by when you abandon them.  So keep that in mind the next time you want your kids to “witness the miracle of birth.”  Do us both a favor and take your kids to a hospital maternity ward or rent a videotape, will you?  And the next time you think one of your pets will “…do fine on their own,” why don’t you just swing by the local animal control and ask to see your local “death chamber?”

Take a look at the 50 dogs and cats piled on top of each other as they were gassed, or open up that oven and take a look at the ashes of thousands of animals that have been cremated.  Maybe you can help shovel some of the ash out of there, because they are in dire need of volunteers.  Better yet, take a drive around town with your local Humane Society representative.  Go ahead and just ask if you can do a drive-along, because they would be happy to show you the horror they see every day because of people like you.  In fact, take your kids with you, and make it a little family outing.  Let them get the full experience of how well your abandoned pets really “get along in the world.”  Personally – I’ve had it with all of you…

Because right now, this emaciated, half-blinded ghost of a cat that I’m staring at, who has limped through my cat door searching for food, is a direct result of some human being’s idiocy and irresponsibility.

And people still wonder why, as a general rule, I like animals better than people…

It’s because I’m left staring at this once beautiful creature that’s been beaten down and abandoned by mankind, and I’m the one forced to sign its death warrant.  This same creature, whose ancestors were once worshiped by ours in the ancient days of Egypt, has now been reduced to sneaking through a home under the shadowy cape of night to steal a bite to eat.

And the only thing that I can do to help it, without endangering my own pets, is to trap it and then call someone who will be able to humanely euthanize it.  My only option in this unbearable situation is to give this once noble beast an honorable death.  And every night, I have to lie here and curse myself for not having obtained my doctorate in veterinary medicine, for no other reason than to help out these creatures who wander into my life, because I can’t help thinking that if I could just treat one severely injured animal on my own, the cost of schooling would have been worth the money.  Call me a fool, maybe I am…

In the meantime, to every person who has abandoned a pet in a neighborhood, left a cat behind when moving, given pets away to the humane society or animal control for no other reason than, “I just don’t feel like dealing with them anymore,” – I’m sure I’ll be hearing from you.  Why?  Because it’s easier to yell at me for speaking the truth than it is to take responsibility for your actions, and those are the kinds of people who abandon their pets.

But instead, I hope you read this and learn something from it besides anger.  I hope it inspires you to volunteer at your local no-kill rescue foundation, or to donate much-needed funds to help out these abandoned animals.  I hope you learn regret, and I hope you learn that amends need to be made with the animals that you left behind…

And Dad?  Once again, you were right.  I guess you just can’t save them all…