Cat Agility: Teaching A Cat to Jump Through Hoops 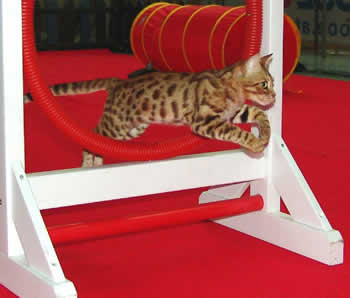 Cat agility, in its official competition form, has been around for nearly a decade. In October of 2003, Vickie Shields, along with a small group of friends, held the very first official cat agility competition, and the International Cat Agility Tournaments (ICAT) began. As with so many things that involve pets, cat agility grew quickly in popularity, and in February, 2005, the Cat Fanciers Association (CFA) held their first competition during the Oregon Cats show.

Agility training, even if you have no intention of competing, is a great way to make sure your cat gets the exercise they need and the entertainment they crave. You may be sitting there wondering how you can train your cats to dart through tunnels and weave around a set of poles when you can’t even get them to use the scratching post instead of the corner of your couch. Yes, cats do seem less interested in pleasing others than your average dog, but just like dog training, you only need to know what toys and/or treats are most appealing to your cat to get started.

Before you begin any sort of training or exercise regimen with your cat, please consult a phys—I mean, veterinarian. Teaching them to jump through hoops may seem harmless, but a check up at the vet’s office is always advised to make sure there aren’t any underlying issues that might be aggravated by the training process. Your vet can also be a great source of valuable information, such as how much is “too much” training in a day, and if your cat should be given extra food when in training, even if it’s not for competition purposes.

Just as in dog training, there are different methods in use when it comes to cat agility training. The simplest appears to be using toys to “lure” the cat through an obstacle course. After repeated runs, they get used to the pattern of the course and complete it faster and faster. This method is quite popular, and would work well for “amateur” kitties who don’t have any plans on going pro.

Others use more traditional training methods most commonly seen in dog training: Spoken commands and clicker training. If this surprises you, we understand why. Cats are known to be intelligent creatures, but they also have a reputation for doing what they want, when they want. But, if you make it fun and there’s food involved – most cats will be game for at least a small training session now and then!

Not every cat will be capable of, or agreeable to, agility training. You can certainly attempt to train any cat that has their vet’s clearance to proceed, but it’s best to start when your cat is young. If your cat is no longer a frisky kitten, but they like to play, then you’re already a giant step ahead! Start slow and keep it fun for both of you. As you know, attempting to force a cat to do anything they’re not interested in doing is futile.

If you’re interested in training your cat, visit the ICAT and CFA websites. There’s plenty of information there to get you started.

[note style=”5″ type=”success” icon=”yes” class=”template-style”]Note from the editor’s cat: While cat agility competitions are reported to have been started by humans, don’t be fooled. It was a cat who, like myself, became quite sick and tired of letting canines keep the spotlight all to themselves, that spurred the very first contest. Known for our natural agility and grace, we, the feline kind, set out to show Fido and his friends that cats can run an obstacle course without even putting a whisker out of place—and without all the uncouth drooling and tail wagging.[/note]

A Tale of Tragedy and Hope