A Tale of Tragedy and Hope 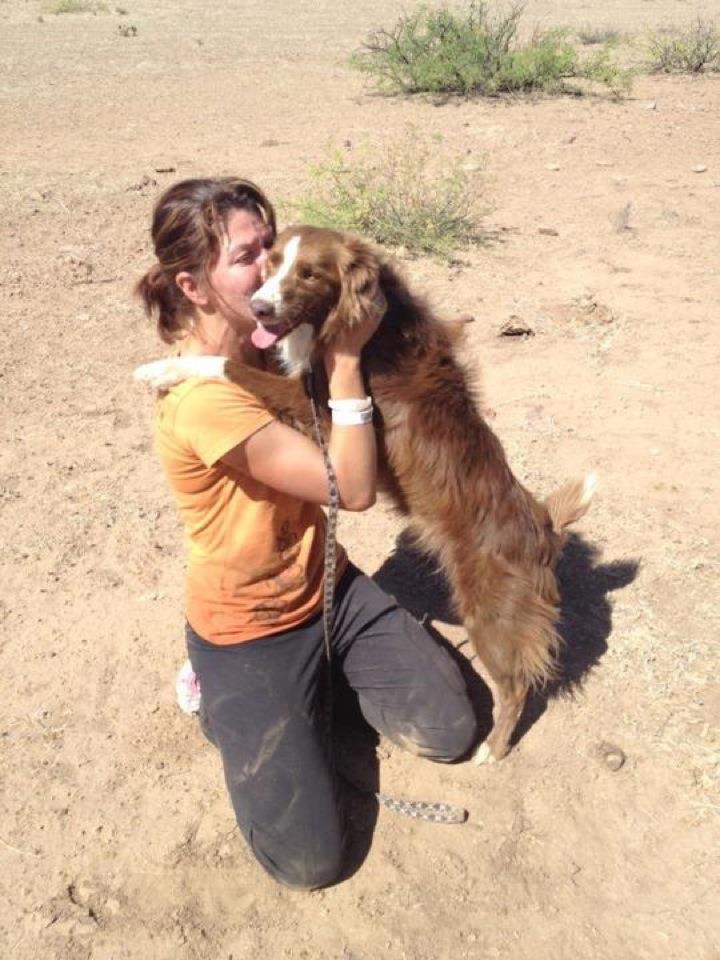 Elicia and Tobie, reunited after search

Sometimes even the strongest individual needs help. This week it was Elicia Calhoun, a top agility trainer, competitor, handler and speaker, who needed help after she and her carload of dogs were involved in a multiple rollover accident in the middle of the Arizona desert around 8:30 am on June 11, 2012. She remembers vividly each sound, sight and bump and bang of the event – from the cacophony of noise that culminated in a single yelp, to the deafening silence that followed. The car had landed upright and as she shoved the dashboard and airbag away so she could exit the car over the hood, all she could think about were her dogs and their safety.

Her 13-week-old Kelpi puppy Tsunami, who had been in a crate that was secured in the front seat, 12 ½-year-old Iceman, 9-year-old Breesea (both Border Collies), 12 month old Destiny, 9 ½ year old Nika (Aussies) and 3-year-old Tobie (Breesea’s daughter, a Border Collie) who had been riding loose in the back seat were thrown from the vehicle on impact and she didn’t know where they were.

Many people stopped to help her and Elicia immediately enlisted help to find her dogs. She did find three of them, BreeSea, Destiny and Iceman but three were still missing. Elicia herself was injured and when the medics and ambulance came they insisted she leave the site – she refused until one of the bystanders and a border patrol agent promised to keep looking for her dogs. 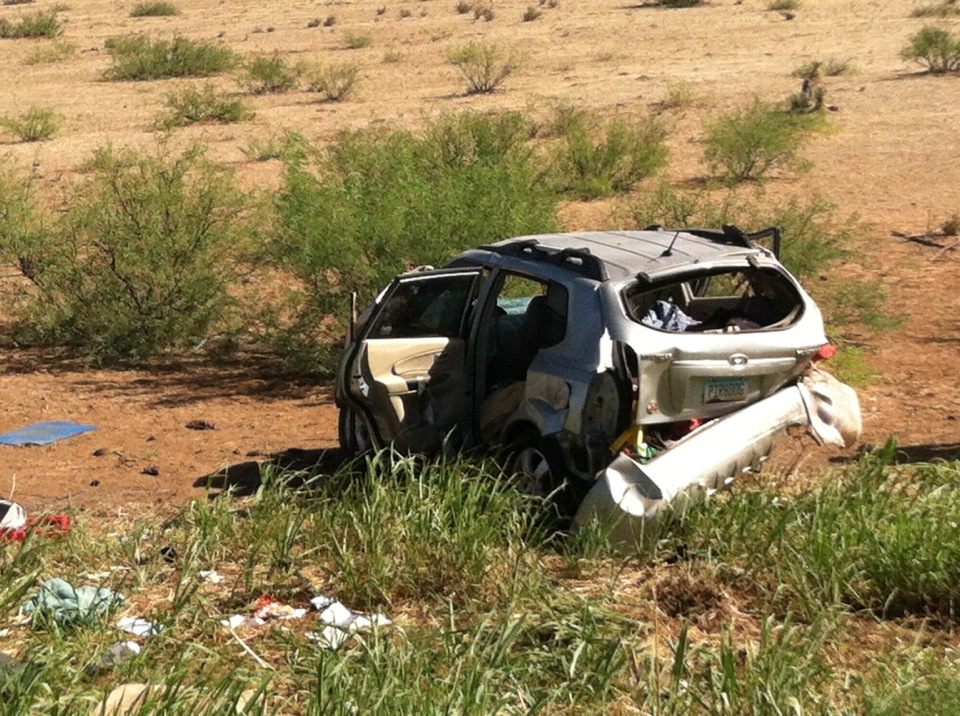 The vehicle remains in the desert

When word got out of the accident through a posting on Facebook, animal lovers shared the posts and reached out to agility friends in that area who hit the ground running. Several of them got together via chat or phone and one of them set up a group on Facebook so that all the information would be in once place. Word spread like wildfire and the agility community mobilized. Within hours, there were over 3,000 members of the community sharing the plea for help and soon help of all types was being offered.

As Elicia was signing herself out of the hospital with a punctured lung (against doctors wishes) she was notified that Tsunami’s body had been found. Though consumed with grief, she knew there were still two dogs missing that needed her and needed her NOW. The desert temps range from low 50’s to 103 degrees and threats of dehydration, hypothermia and death by wildlife or by passing vehicles were a very real threat.

By day’s end, the online community swelled and the members became emotionally invested in finding the two remaining dogs and committed themselves to action. Animal communicators were consulted and were in touch with the dogs. An online contribution site was created, as were lost signs and posters. Inquiries and arrangements were made for planes, billboards and even a military heat-seeking device was employed. The word spread via facebook, the dog community, television news stations, truckers, HAM and CB operators, the equine community, and to ranchers in the surrounding area. 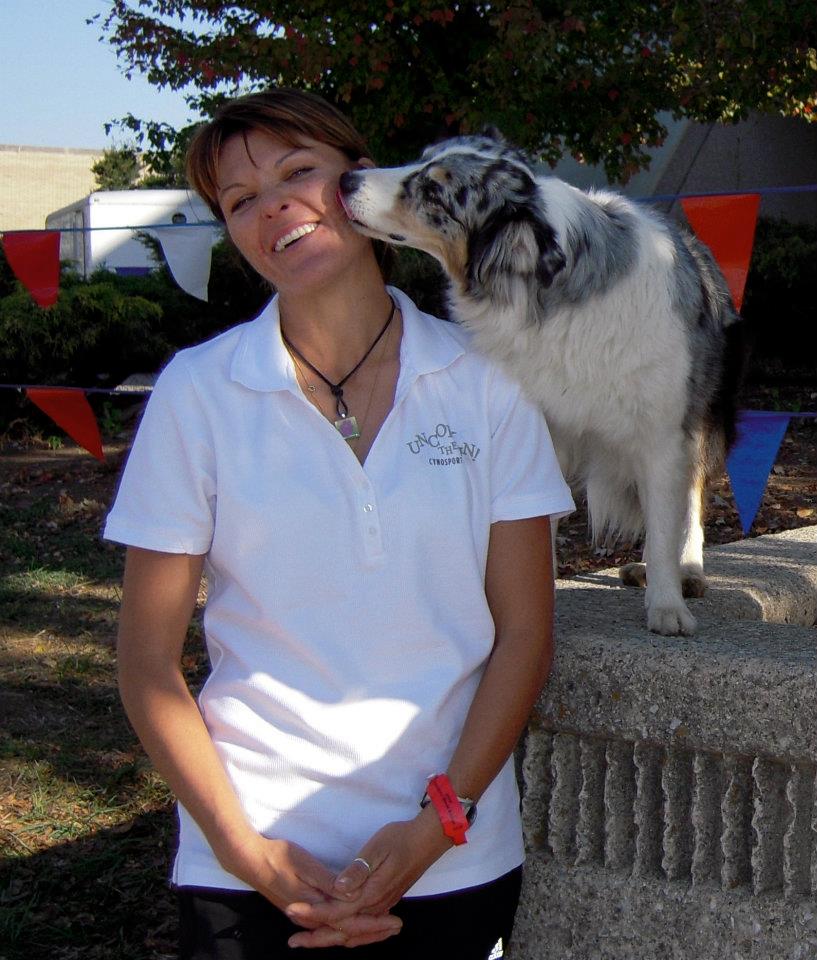 Elicia and her agility dog, Nika who was tragically killed.

During the search, most of which was done on foot or by truck out in the desert terrain, word came that Nika’s body had been spotted in the median of the freeway. It was around 7 pm and Elicia went to her body, held her and cried. She knew that her spirit was no longer with her body and drew upon the strength inside her to move forward to find the remaining dog. It would be dark soon and Tobie needed her mommy.

As the air chilled and the sunlight faded the volunteers who had been searching late into the night finally set up camp roadside – some sleeping in their cars with their hazards on while Elicia slept outside in case Tobie came to look for her. Several volunteers could swear they heard yips of a dog in the night, but no one could tell which way they came from.

In the very early hours of the next day, the search began again. Sightings of Tobie near cattle renewed the frantic search. During this time, a volunteer coming from Tuscon was approaching the crash site and around 8 am on the side of the road she spotted Tobie. Elicia rushed to the location, but no Tobie. They looked again and she had changed directions and was on the opposite side of the freeway. Elicia and a volunteer pulled into median where the dog was and honked the horn the dog looked at Elicia – recognized her but went running in the opposite direction IN FRONT OF A BIG RIG!

“NOT AFTER ALL OF THIS,” said the volunteer. Elicia hit the ground running. She crossed behind the big rig and got to the opposite side. Tobie knew it was her, but wasn’t cooperating at all, she was running away! Finally Elicia and a friend were able to herd the herding dog and as soon as she got Tobie safely in her arms a photo was taken.

News was quickly sent, all volunteers were notified, pending actions cancelled and by now the over 6,000 members of the newly formed Facebook community rejoiced.

Elicia and the volunteers took care of the medical needs of the dogs, while Elicia checked into the ER for followup. The end result? Her punctured lung was almost healed and the cuts, contusions and hematoma would heal in time. Iceman, Destiny, Breesea and Tobie have some minor injuries – some have sliced or worn pads, bruises, mobility issues and though at some point Tobie had also been hit by a car, she should be fully recovered in a few months.

This accident bonded a community together. People from all over the world were involved and watching the updates from their home computers. People drove from miles to help with the search or did what they could from where ever they lived. The strength and dedication of a dog mom was tested. Her reminder to enjoy every minute you have with your dogs, you never know when it might be your last was heard loud and clear. While many find online communities a dangerous or unsafe atmosphere, in this case it was a loving, giving and sharing place and through that positive energy a miracle happened.

About Elicia Calhoun
Elicia Calhoun is a top National and International Trainer, National Champion and World Champion, Lecturer, Professional Agility Instructor, and Author. As a World Champion Team member in 2001 and Bronze Medal Team member in 2003, Elicia has represented the United States for an unprecedented five consecutive years with the same dog, Suni. She and her Aussie, Suni, MACH 5 Slydrock’s Solar Power ADCH, also have the top individual Maxi dog placement at the World Championships, and are nationally recognized icons, having been featured competing at large televised events on Animal Planet (AKC and USDAA National Championship) and ESPN (Great Outdoor Games) numerous times since 1998.Learn more about Elicia Calhoun by visiting Waltzing Paws.

About the Author
Deborah Davidson Harpur considers herself a dog mom first, an agility trainer/ handler second and a writer third. She is a doggie stage mom to her own rat terriers, border collie and shepherd mix in addition to the 10 other dogs she handles for their owners. You can learn more about her on pm2dogagility.com or on her Facebook page.

Tags
Previous Article
Adopt a Shelter Cat Month – Can You Help a Feline Out?
Next Article
5 Ways to Help Pets Beat the Heat

Cat Agility: Teaching A Cat to Jump Through Hoops