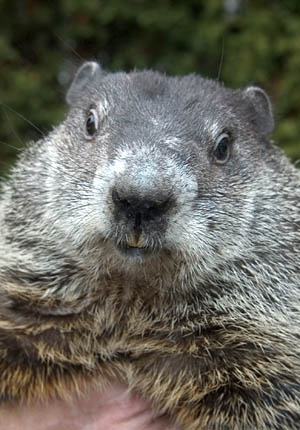 Punxsutawney Phil has announced to his “Inner Circle”, a very select group of handlers who speak Groundhogese, that he has indeed seen his shadow and there will now be six more weeks of winter throughout the United States.

What does this mean to Arizonians? We’re guessing a “moderately temperate” winter with highs in the 70’s and lows ranging from 40-50 degrees. I, for one, am looking forward to the postponement of soaring summer temperatures.

Despite Punxsutawney Phil’s extended age, he’s continued to utilize some very modern approaches in announcing his weather predictions. The use of the Pennsylvania-tourism Facebook page spawned a slew of comments ranging from relief for a few more days of cool temps to dramatic cries for relief from the cold. Complications with Twitter in 2010, which included a breach of security in Punxatawney Phil’s account, seem to have stopped him from using the popular site as his primary communications tool. You can learn about Punxatawney Phil, Groundhog Day traditions, and much more at http://www.groundhog.org

On Gobbler’s Knob on this magnificent Groundhog Day, February 2, 2012.
Punxsutawney Phil, the Seer of Seers, the Prognosticator of all Pronosticators,
was summoned from his burrow in the old oak stump by the tap of President Bill Deeley.
He greeted his handlers, John Griffiths and Ron Ploucha.

After casting an appreciative glance towards thousands of faithful followers,
Phil proclaimed
“As I look at the crowd on Gobbler’s Knob
Many shadows do I see

So six more weeks of winter it must be!