Out of Africa, Into Eden 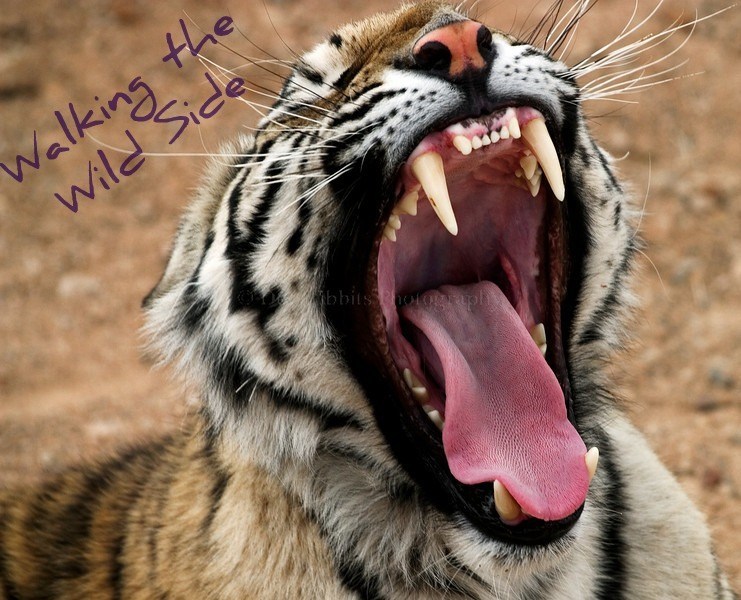 The 500-pound cat lazes in the afternoon heat, his two best tiger friends resting nearby. I approach with measured steps, the beast’s amber eyes following every movement through half-closed lids. At this distance, I’m not a threat, but one step in the wrong direction and I make the transformation from interested observer to trespasser. I measure the distance between us, deciding if it’s worth it…

Let’s face it – there’s something magical about wildlife. It’s a quality that can’t be described without using words like mystical and reverent. This is especially true when it comes to big cats.

And that’s why I’m breaking from our normal “pet talk” tradition to discuss a wildlife park called Out of Africa.

We all have a fascination with wildlife. If you don’t, you probably aren’t reading this (but maybe you should be). If you do, you know what I’m talking about. Wildlife parks and zoos are critical to preserving wildlife. Because let’s face it – if you never actually see wildlife, it’s harder to care about its outcome. This is doubly true for our youth. Wildlife parks and zoos provide the perfect opportunity for educating the public on animals.

When we pulled into the dirt lot of Out of Africa, I was beyond excited. (If you follow me on Twitter or Facebook, you know how excited I was.) I mean, who wouldn’t be?  This is a park dedicated to “big cats” and you all know how much I love cats. And while it had been years since I’d been to the park, I knew they had expanded and grown. I also know the owners of the park care more about their animals than they do themselves, which is how I feel about animals.

So we pulled in, parked, grabbed a couple of bottles of water and entered through the giant gates that resemble something out of a Jurassic Park movie. 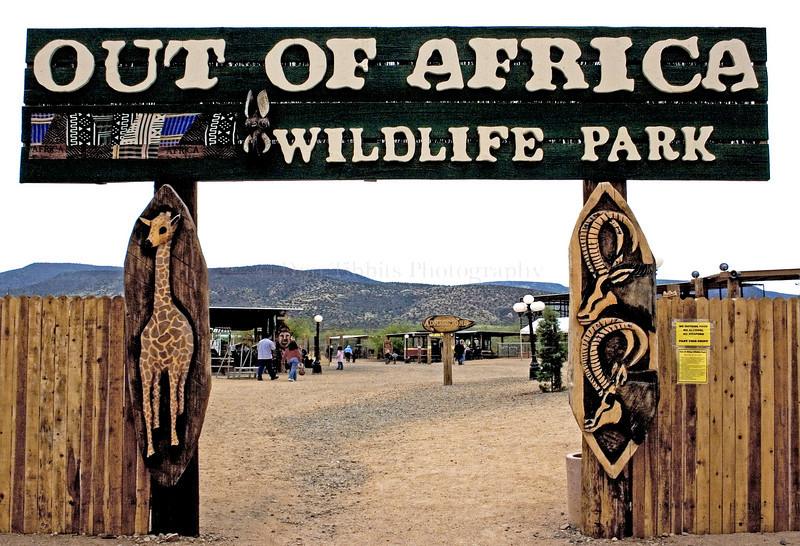 [heading style=”modern-1-light” color=”#006633″ style_color=”#06192e” align=”left”]Going On Safari[/heading]
Immediately after entering the park, we were ushered onto a modified school bus painted like a zebra. As we boarded, we traded out our safari ticket for a carrot stick, which of course got the questions going.

But despite their excitement, the kids are well behaved and our guide is quick to answer. We begin the bumpy ride to the gates of the African Bush Safari’s Serengeti. The tour is 45-minutes long, but feels more like ten minutes. During this time, the very entertaining and intelligent guide will tell you everything you want to know about the animals. You also get to feed your carrot to giraffes, try and avoid getting your camera stolen by an ostrich, and learn how the Sable antelope are really the “mafia of the Serengeti” because they are the only animals in the wild that can take out a lion.

The clean scent of juniper and creosote permeates the air and a soft breeze refreshes you during the tour. We identify the individual zebra colts based on their unique patterns as they chase down the bus, touch an ostrich egg, and watch a water buffalo nestle into a bog with her calf. Everything about the place is astounding and it’s almost too much to take in on one tour. 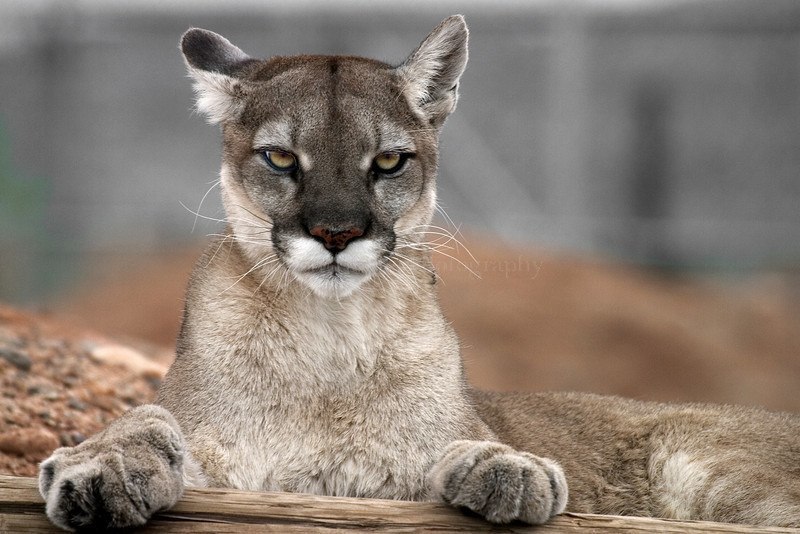 After safari, we’re anxious to see some predators. But, we’re also hungry. We decide to head up the mountain to grab lunch, where the food is a little more plentiful than the snacks and hotdogs available in the south 40. We suggest you do the same: grab an open-air bus up to have lunch up near the arena. It’s far better in quality and the cost is more than reasonable. For $7, you can get a very tasty homemade sandwich, chips and a drink. Then grab a table near the bears and lions that are usually napping at that time, while you enjoy lunch.

After lunch, we walk around the massive enclosures. The most unique thing about Out of Africa is how the animals share living quarters. The bears and cougars live together (the wolves used to live there, but finally opted for a room of their own). A white tiger named Chalet and a black leopard share a habitat because they’ve become best friends and can’t bear to be separated. 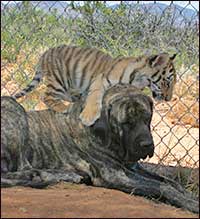 Large individual habitats offer the Park’s predators (which include lions, tigers, bears, wolves, and hyena) their own private underground lairs.  They also have elevated platforms for relaxing in the mountain breezes. Unobstructed photo platforms are placed strategically throughout the preserve for guests. 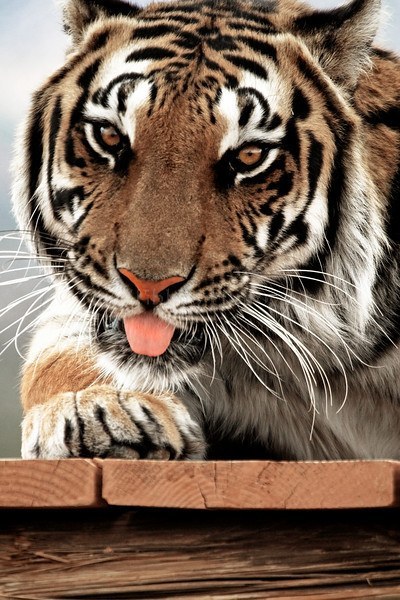 If you’re like me, you have a particular fascination with big cats. Tigers in particular are some of the most evocative of wild beasts. They are the largest of all Asian cats and also one of the most culturally important – particularly in the Far East (a fact that is proven by tiger farms, but we’ll be getting to that subject later).

They are also personable, almost human-like in their interaction, and can crush your skull with one playful swipe of a paw. One of the most popular shows at Out of Africa is called “Tiger Splash” where employees dive in the pool being pursued by tigers.

Okay – I’ll admit I initially had some anxiety about this particular show. My biggest worry is that someone will see it and want to run out and buy a tiger cub (don’t do this).

But, it suddenly struck me as I was sitting there that unless you see these animals in action, you don’t have a vested interest in their outcome. The more I watched, the more I wanted to be a part of rescuing these noble beasts. All around me, I could hear children questioning their parents:

“Dad, why are they called man-eaters?” Because they can.
“Can we have a tiger?” You can’t afford to feed yourself, how would you feed a tiger?
“Will the tiger eat me?” Well, yeah – probably. But you’d be more like a snack than a meal.

I’m kidding. But, still – education is all about timing and the time to educate your kids on nature and the environment is when they are actively experiencing an event. When kids begin asking questions, they are opening a dialogue. That is the most important time to teach.

After Tiger Splash, you can take a minute to feed the tigers. (Yes, I did actually say that). It’s another incredible way to marvel at the sheer size of these animals. Of course, there is a fence between you and the animal as a trainer puts large chunks of meat on a “pickup” tool. This allows you to reach the meat between the fence and feed them. The $5 charge helps cover the costs of feeding the animals on the preserve over 800 lbs of meat a week.

Want to see what it’s like to feed a predator? At Out Of Africa, you can see it in action. The entire crowd of park-goers is allowed to follow the food truck around the park as each predator is fed, but you have to be there on a Monday, Wednesday or Friday to participate. It’s really something that needs to be experienced.

Out of Africa is all about rescuing animals – not just putting them on display. Aspen and Cyprus, two young grizzlies, were rescued from the backyard of a taxidermist. Many of their large cats were rescued from people who thought getting a cub was a good idea until the animal became a 500-pound eating machine. The large rhino, Boom-Boom, was rescued from a canned hunting operation and donated to the park.  His enclosure alone is nearly 6 acres. 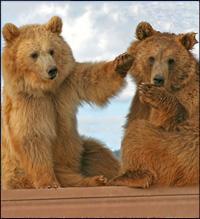 Dean and Prayeri Harrison are the park founders and they are both present at each “splash” event. Dean emcees while Prayeri works with the cats and caretakers. It’s important to note that none of the cats are “trained” and nothing is scripted. They bring a couple of tigers in with toys, and we get to watch their interaction. That’s it. And that’s what I love. If the cats don’t feel like playing, they don’t play. No one, including the animals, is forced to perform.

After 20 years of working with wildlife, there hasn’t been a single fatality. That says something. Especially when I see the tigers in question having an absolute blast in the pool area. They chase toys (and people) as together everyone dives into a giant pool designed specifically for the cats. What an amazing way to stay cool in the deserts of Arizona!

The park owners have learned by trial and error to be sure. But, after many years of caring for big cats, they have created a stimulating environment for their animals. And that’s the most important thing they can do…

If you’re planning on being in Arizona, do yourself a favor and take a drive to Verde Valley to meet these incredible animals and their caretakers.

[note style=”5″ icon=”yes” class=”template-style”]A special thanks to Don Tibbits for the majority of these amazing photos. Please visit him at http://www.dontibbits.com[/note]

Visit Out of Africa: