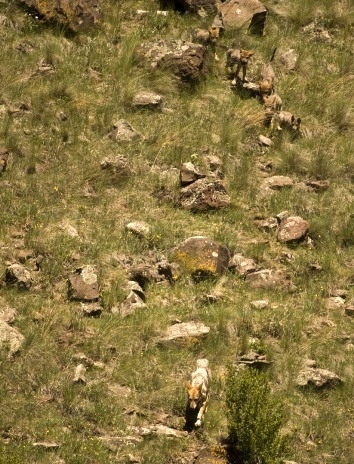 As the Wallow Fire continues to grow and impact eastern Arizona’s landscape – displacing residents and threatening livelihoods – wildlife officers are on the ground helping evacuate residents, protect structures and mitigate the effects on wildlife. The fire has burned nearly 106,000 acres as of early June 3 and is at zero percent containment.

An interagency team is monitoring the effects of the fire on the endangered Mexican wolf population that lives in the area.

Two of four wolf packs that are known to reproduce regularly in Arizona – the Rim and Bluestem Packs — are in the immediately impacted area of the fire. Young pups have been confirmed for the Bluestem Pack, and the Rim Pack is displaying behavior that is consistent with denning activity. However, the fire’s impact on these wolves thus far has been low.

As part of a larger containment strategy, a low-intensity fire was ignited along the fireline north of the Black River to remove ground-level fuels and help prevent a high-intensity fire in the vicinity of the Bluestem Pack. This burnout was intended to reduce the intensity of the main fire when it burns through the denning area and is an important step promoting the survival of the pups associated with this pack.

“Fire is a natural part of the ecosystem for all wildlife, including this wild population of Mexican wolves,” said Chris Bagnoli, Arizona Game and Fish’s Interagency Field Team (IFT) Leader for the wolf reintroduction. “The team has to balance the desire to help protect the affected wolves, while also preserving the bond between the pups and the adults and not putting fire crews at risk. Unfortunately, removing the pups now and returning them to the den later isn’t an option as the adults will not accept them later.”

The fire also has the potential to effect the Hawks Nest Pack, which is denning several miles away from the where the front line of the fire is as of June 3. The team will continue to monitor this pack as the fire progresses in their direction.

The Eastern Arizona Type II Incident Management Team, commanded by John Philbin, is also assisting in the wolf monitoring effort. The team has allowed project personnel to use a helicopter for survey flights, which have located both the Rim and Bluestem Packs by their telemetry collars. The information obtained from the collared wolves confirms that they are still located adjacent to den sites, indicating that the pups are most likely still alive.

“As an element of a fire-adapted ecosystem, these are wild wolves and like most wildlife, they have an amazing ability to move in response to wildfire,” Bagnoli said. “Forest service personnel reported seeing one of the Bluestem pack members and at least one pup of the year during operations Wednesday so we know that the pups are still being tended by the adults.”

The Interagency Field Team will monitor the after-effects of the fire and may provide supplemental feeding if the wolf’s prey base diminishes significantly immediately after the fire. The fire is expected to initiate regrowth in the next couple of years that will help provide plenty of forage for elk, mule deer and white-tailed deer.

Tags
Previous Article
A Step at a Time
Next Article
SmartyKat Toys Do the Work For You
PetsWeekly, 2021 ©All rights reserved.