Books: The Mountaintop School for Dogs and Other Second Chances

When 24-yr-old unemployed Evie sees a classified ad that reads, “Would you like to become a dog ____?”, her answer is, “maybe”. The missing word piques her interest and she ultimately decides that anything has to be better than what she is doing now – the endless therapy classes, and a general dis-ease with the world around her. She researches what type of dog ___ she could be and settles on “trainer,” despite never having had a pet.

The Sanctuary is an old ski lodge turned dog rescue that sits atop a snowy mountain and is run by nuns.  When Evie arrives to begin her dog training classes, she isn’t prepared for what she finds. A large, stoic and very strict woman meets at the front desk. Her name is Mrs. Auberchon and just Evie’s presence seem to annoy the older woman.

And so begins Evie’s search for guidance in her new career as a  reluctant dog trainer for special needs canines. 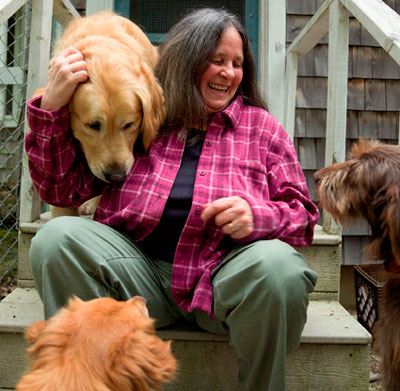 [note style=”5″ icon=”yes” class=”template-style”]Disclosure: We received a copy of this book for review. This has not influenced our opinion – the opinions expressed above are our own. We use affiliate links where possible. Thank you for using these links to help us keep our site free from cluttering ads![/note]

Without direction or a scheduled time for training, Evie goes down to meet the hodgepodge of dogs. They were all strays; some had been beaten then abandoned at an early age, some were faced with staying in abusive situations all of their lives. They are the first dogs Evie has ever met, has ever known, and in each of their eyes, she sees the fear and danger and immediately understands the reaction she’s facing. She and the dogs are the same – they are broken, abandoned, and frightened strays. They are broken as Evie feels.

She takes to the Internet for advice on how to train dogs, keeping copious notes along the way. Keeping a journal, she begins documenting her notes. Her photographic mind keeps the facts straight and allow her to match photos with information, breeds with quirks, and her notes keep the more abstract terms in place.  Words like abandon and rescue and chances begin to mean something very different as she, along with a new 16-yr-old boy , Giant George he calls himself, after he watched a Great Dane named King George set records in the ring for being the largest dog in the world. George is not only as big as that Dane, but has a heart to match it.

If you have a tendency toward well-written novels that hearken back to a time when you were learning a key lesson, you will love The Mountaintop School for Dogs and Other Second Chances

. If you have ever wondered what life would be like if you followed your dreams instead of your head. If you ever thought you have given all you can and just can’t find the strength to go forward, this book will help you find it in spades.

The story is clean and fun, you’ll pick up some dog knowledge if you choose to do so.
This novel is a reminder of what happens when broken animals and people bond to form a unique and powerful pack. It should be a must read on everyone’s reading list because like it or not, we’re all broken.

For more dog-related books, check out the reviews below: