There are many types of books in the world and like me, many authors who once focused on nonfiction are now moving to fantasy and thrillers. It makes for some fascinating reading for animal lovers who cannot bear to be parted from animals even in their reading.

It is with great pleasure that we were able to interview a few of our animal-writers-turned-thriller-writers.We are starting out with Amy Shojai, author of the newest thriller, Lost and Found

. This novel explores the role of a service dog named Shadow in protecting an autistic boy after he disappears in a freak blizzard only to fall prey to an evil medical experiment that could potentially impact millions. September Day, an animal behaviorist, must overcome her own demons of a murdered husband and a ruined career, to help save this young boy before its too late.

[note style=”5″ icon=”yes” class=”template-style”]Disclosure: We received an e-book for review. This has not influenced our review – the opinions expressed above are our own. We use affiliate links where possible. Thank you for using these links to  help us keep our site free from cluttering ads![/note]

Many of you know Amy Shojai from her long history in the world of pets as a pet care consultant, author of 26 nonfiction books about pets, Puppies Guide at About.com, Behavior Expert at Cats.about.com, and radio host of Pet Peeves. She’s been featured in quoted in publications like the NY Times, Animal Planet, CNN and countless others. Here is a transcript of our very interesting interview with Amy:

How much research did you do on service dogs and autism before writing your novel?

I did quite a lot of research into both. While I already had some background in the training of service dogs, I was fascinated by the unique requirements autistic families had. My own dog’s breeder had placed service dogs with families of children on the Spectrum, and pointed me to a few organizations. Also, my husband had conducted some research for his PhD on the subject. And as a former vet tech and medical writer, I knew about how drug trials and FDA procedures are routinely . . . how shall I say . . . bypassed? by using them off-label for animals, so I wasn’t surprised to discover the same was true for many protocols for children.

Which characteristic of your main character, September Day, do you most wish you shared?

Hah! Well, I wish that I was her age again—but with my years of experience and knowledge! Getting older ain’t for weenies.

Can you tell us a little about your own pets?

I have a 16-year-old Siamese wannabe named Seren, and she rules the roost and kicks doggy butt when need be. The newcomer dog, Magic, will be seven years old this summer, and is a fetching fool—and probably way smarter than I am. He’s a gorgeous mostly black German Shepherd, just like the pup in the book.

You mention a radio show in your novel. Is this a real show and if so, how can we listen in?

Funny you should mention that! For several years I hosted an online podcast radio show, Pet Peeves, and actually won several awards for them—I chose some stellar guests that made me look/sound good! Of course, those shows are not with my character September, but people can still hear the recorded shows at http://www.petliferadio.com/petpeeves.html. Just this past week, though, a new LIVE radio show was launched that’s more in line with what takes place in the book. My new show is called CAT CRAZY and is a call-in advice show live every Monday 8pm Eastern, 5pm Western, co-hosted with the talented Tracie Hotchner. Folks can learn more here: http://www.radiopetlady.com/cat-crazy.htm

I’ve found that nonfiction writers who move into a fiction genre generally write thrillers and fantasies that are also very factual (true to the animal’s nature). For example, in my own novel Shepherd’s Moon, I do extensive research on all species to ensure that the Shifters and Weres characteristics are true to their animal counterpart. Did you find yourself working individual mannerisms into the book while creating Lost and Found?

Absolutely! As a certified animal behavior consultant, many of my clients are faced with problems because of misunderstandings about normal cat and dog behavior. As I wrote LOST AND FOUND, I was very conscious of the opportunity to educate readers—while entertaining with true-to-life believable characters. That’s clearly resonated with readers, based on the reviews, which often comment on how the animal characters were “real” and reminded them of their own fur-kids.

Shadow, a large German shepherd, is as much of a hero as the main character. Can you tell us a little about how you came up with his character? Was it based on Magic, your own German Shepherd?

In the first several drafts of LOST AND FOUND the hero dog’s name was Magic. *s* Yes, absolutely, the doggy character was based on my boy. Only Shadow is a bit more bidable than Magic, who began thinking for himself at a much earlier age than Shadow. I suspect as Shadow matures, some more of my own dog’s personality will creep into the character, too.

Why did you select the breed of Maine Coon for the character of Macy? Do you anticipate other breeds coming into play for future novels?

Mostly I chose the Maine Coon breed because of what the cat character needed to do in the story. Without giving too much away—the kitty needed to be confident, and big enough to hold his own in the big confrontation scene at the end. On top of that, most everyone who has a longhaired cat compares their kitty to a Maine Coon, so the breed is familiar enough and well liked to strike a chord with readers. They’re a favorite of mine when I attend cat show, too—sort of the quintessential American kitty!

You’ll notice there also was a second cat, an aging overweight kitty named Simba, in the story that was orphaned when the owner was killed. One of my blog readers won a contest to “name that cat” and so the kitty characteristics and name came courtesy of her entry. In fact, the Maine Coon’s name was changed to Macy because another reader won that honor. There also were two other dog characters named by readers. So yes, other animal characters and possibly other breeds will come into play in future novels.

Which do you find more challenging: writing thrillers or writing nonfiction?

Novels for me are paws-down the most difficult writing challenge I’ve ever had! Perhaps that’s because I’ve written nonfiction for so long—columns, articles, 26 books—it’s quite natural by now. Fiction, though, uses a different mindset and I’m still learning to switch that on. Right now, warming up the fictioning engine and getting the story running takes more time than I’d like, but as with anything else, practice improves technique.

What are your plans for future novels? Will LOST AND FOUND become a series?

Yes, based on the great reviews and reader requests for more, LOST AND FOUND will have a sequel and perhaps become a series.

What are you working on now?

I’m working on the next book featuring September, Shadow and Macy, called HIDE AND SEEK. It continues the story nearly where the first left off, so some familiar characters—and a few new ones—will offer more thrillers with BITE! 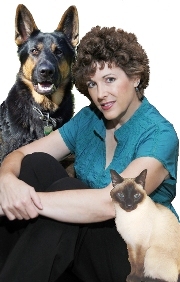 Amy Shojai is a certified animal behavior consultant, and the award-winning author of 26 bestselling pet books that cover furry babies to old-fogies, first aid to natural healing, and behavior/training to Chicken Soup-icity. She is the Puppies Guide at puppies.About.com, the cat behavior expert at cats.About.com, and hosts a weekly half hour Internet Cat Crazy radio show.

Amy has been featured as an expert in hundreds of print venues including The New York Times, Reader’s Digest, and Family Circle, as well as national radio and television networks such as CNN, Animal Planet’s DOGS 101 and CATS 101. Amy brings her unique pet-centric viewpoint to public appearances and THRILLERS WITH BITE!

Other animal thriller authors you may enjoy:

Tags
Previous Article
Journey of Woman and Her Dog Around the World
Next Article
Do You Really Have The Commitment To Own A Horse?