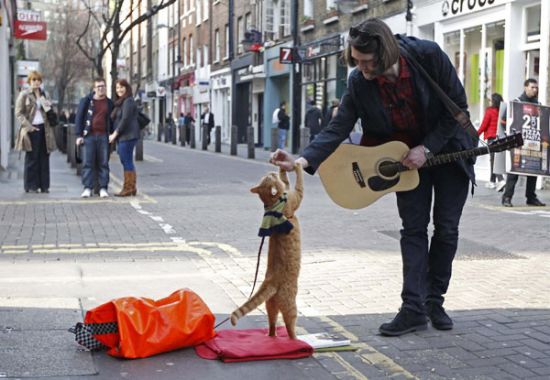 Sometimes we rescue an animal, but most times, it’s the animal who rescues us. This is true for our lives and it’s also the theme of the book, A Street Cat Named Bob: And How He Saved My Life

. It’s a theme I can completely relate too. While I have rescued hundreds of animals in my lifetime, I will admit it was done for selfish reasons – they have always offered more to me than I could ever hope to give back to them.

I have maybe 100 books on my “to be read” list, and I only just received this book yesterday, yet I finished it in a single sitting today despite it being 267 pages long. The sentiment and connection shared between two beings of different species is what drags you in and keeps you reading.

Bob is a street cat who, like many street cats, chose a very specific person to attach  himself to – in this case, a recovering heroin addict and “busker” named James Bowen. For years, he had struggled with addiction, homelessness and isolation. He had once been stoned in Australia by childhood bullies and spent over twenty years feeling disassociated from humanity. Little wonder as everyone knows how the homeless can be often be denigrated. It’s probably from that fear of, “There go I, but for the grace of god.”

[note style=”5″ icon=”yes” class=”template-style”]Disclosure: We received a book for review. This has not influenced our review – the opinions expressed above are our own. We use affiliate links where possible. Thank you for using these links to help us keep our site free from ads![/note]

The last thing this man needed was a pet. Yet, along came Bob – a ginger cat with a lust for life, a cat willing to lead the way (literally and figuratively) down a busy London sidewalk or relax in his seat on the bus. In this heartfelt biography, we see a side of London that few want to view. We see the temperament of people at their best and their worst, extremes that cats tend to bring out in people. And at its center, we see Bob the wonder cat.

The story begins when a down and out musician living on the streets of London is found by a ginger Tom, also on his last legs. An infection in his leg brought him to the author, who spent his last pennies making sure the cat obtained medical attention. Two weeks of antibiotics and bonding later, and the cat had wiggled its way into the author’s heart, as cats are wont to do.

Bob began joining the musician on his journeys by bus to the various places he played guitar, riding along on his shoulder and braving the freezing London temps to help his partner earn a living. After many trials and tribulations, the two eventually became an Internet sensation and eventually landed a book deal when an agent found them performing.

But this book is not a rags to riches story. It’s about connecting with another living soul – and as animal lovers around the world know, it’s not always as human soul that is the changing force. Sometimes it’s the soul of a dog, or a ferret, or that of a ginger Tom as wily and rough around the edges as the author, but who both share a heart of gold under the rough exterior.

I strongly recommend this book, not only because I know you will fall in love with Bob but because it is a look at why adoptions should not be decided solely based on income. Yes, it’s important to be a responsible pet owner. Yes, it’s important to be able to care for your pets as well as yourselves. But, sometimes it takes that animal to create the motivation needed to pull yourself up. This book is a reminder that we are all human and we must learn to make our way in this world. Some of us do it through human companionship, others find their kindred spirit through animals. It’s a topic I can relate well too.

As many of you know, a dog named Malachi saved my life. The trend continued with Aquilla and eventually a series of cats who are, and were, like my own children. Like James, animals have all wielded far more motivation in my life than people, which is why I can relate so well to this story.

If you’ve ever loved an animal more than yourself, you will relate to and love this book as much as I did. This is a novel that will tug at your heartstrings and remind you that the unconditional love between man and beast does, and has always, existed. In many ways, it has forged the world…