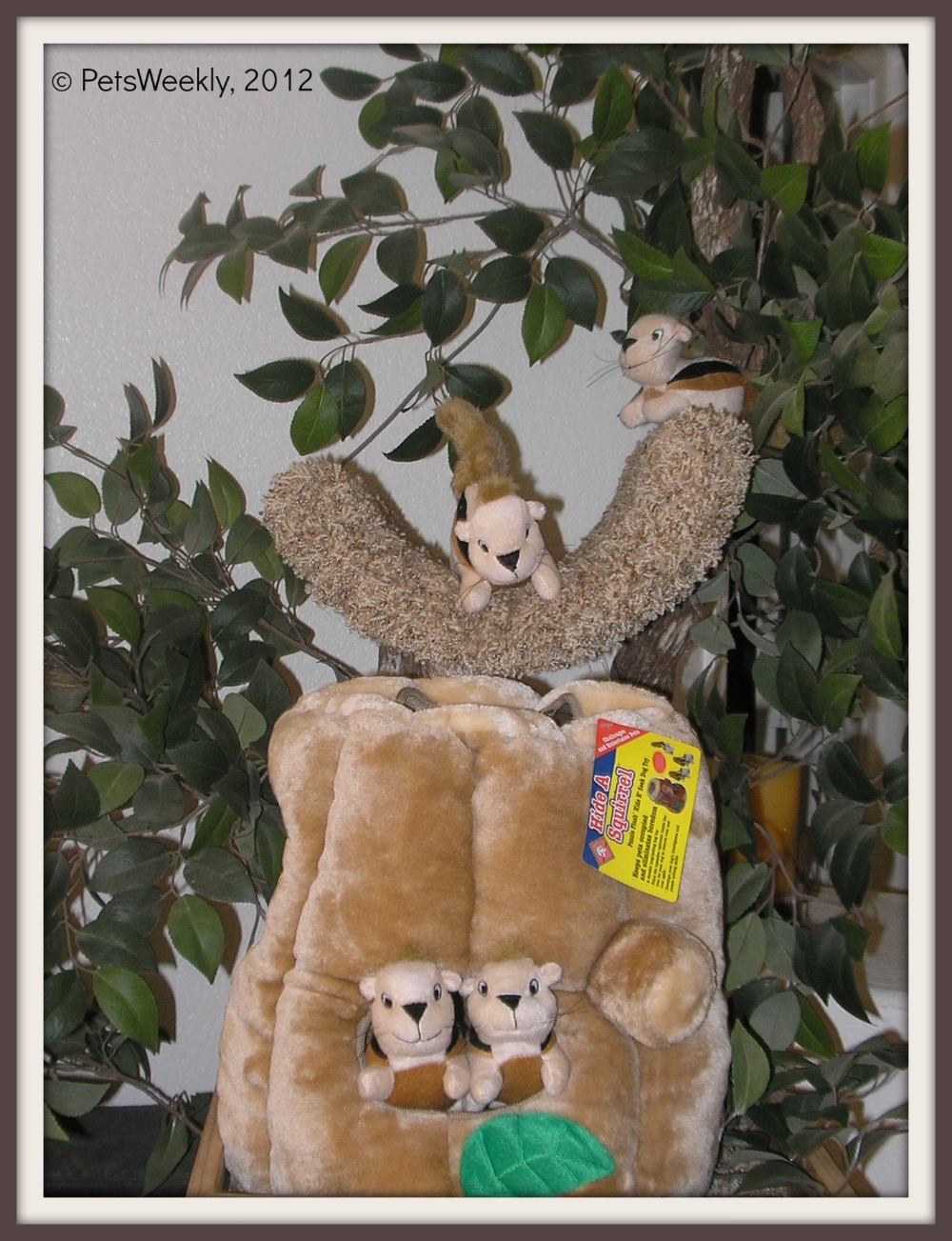 As far as I’m concerned, one of the funniest movie scenes ever written was in National Lampoon’s Christmas Vacation

, when Chevy Chase spotted a squirrel clinging to his (very) elderly Uncle’s back and knocked him to the ground. It’s one of those “you have to see it to appreciate it” scenes, but I laughed so hard!

Which is one reason I love the Kyjen Special Edition Hide-A-Squirrel toy. I feel exactly like the uncle whenever I have a squirrel toy in my pocket.

Okay, that came out wrong. Let me explain…

[note icon=”yes”]We may have received product samples from one or more of the companies mentioned above, however our opinions are our own and we are under no obligation to create a positive review or article. We do our best to use affiliate links when possible.[/note]Every night, while Cheiss is fetching his favorite red Kong ball and Bree is chasing her favorite red laser toy, Brock loves to “hunt” his favorite stuffed squirrels. He feels victorious when he finds one in a tree trunk, or in my pocket after I pick up the dozens of squirrels littering the yard. His favorite game is to spot the hidden squirrel, then dash over and rip the stuffed squirrel from my pocket – saving me from the rodent.  (I never said I was a great dog trainer and I know it’s not encouraging good behavior from Brock, but if you saw how much he loves this newly discovered sport, you would let him do it too).

Which is why the VERY LARGE, super-sized, limited edition Kyjen Hide-A-Squirrel Pet Toy

They were kind enough to send one out for us and it immediately became Brock’s favorite toy. He loves to “hunt” the squirrels, make them squeak, chase them, look for them in people’s pockets and in the giant plush tree trunk that comes with this product. The size makes it accessible to large dogs like Brock who normally can’t get their head into a standard sized Hide-A-Squirrel.

Hide-A-Squirrel, while not designed for heavy chewers, is a fun way to encourage supervised interaction with your pets. The puzzle consists of getting the squirrels out of the tree trunk, which is simple enough, but is used by dog trainers and behaviorists to keep pets busy and engaged, and has become a classic toy for dog owners worldwide.

As I mentioned, it’s a toy that can be quickly destroyed by heavy or obsessive chewers, but the toy itself is just so gosh-darned adorable, you’ll just watch them play and be able to pick it up before any real damage is inflicted. But even if they do destroy it, you’ll be able to afford a new one. The entire set is only $22.99 (MSRP) and extra squirrels can be purchased in packs of three for only $9.99.

So head on over and pick one up before they’re gone. Remember, only 3,000 of these were made and one day it will be a fabulous collectors item!