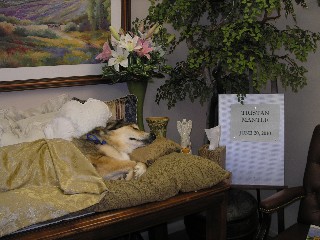 Pet loss is one of my least favorite things to write about – probably because we’ve had so much of it lately. My own pack has decreased in number from 3 to 1 in only a few weeks.

Many of you know that we recently lost both Roscoe and Tristan. Roscoe succumbed suddenly and unexpectedly to Bloat . He passed away with Cheiss and Kyra, the Cog, at his side.

No one likes to think about death. No one wants to consider what happens when we wake up to a beloved pet that has passed on in his or her sleep. Yet, when it happens, you will realize how important pre-planning is, and by then – it’s usually too late.

A pet’s death is something that many people feel as deeply, and sometimes more deeply (according to this recent study) than the death of a person. There are theories about why – some of them include the fact that while we can tell an animal anything, many people continue to keep secrets from others. No matter the reasons, it’s an event that none of us ever want to think about.

When Roscoe died, it was 3 am. Sam discovered him upon waking and since my husband had to be at work within the hour and I hadn’t even woken up yet, a quick decision had to made. I’ll admit – I was tired, not thinking straight, and despite being considered a “pet expert,” I really didn’t know what to do or who to call at that hour.

As nearly all of my friends and clients operate on the normal 9am–5pm banking hour, I wasn’t sure who to call. And with one vehicle at the shop, I had to make a decision on what to do with Roscoe’s body right then.

Had I made prior arrangements and spent even an hour of my life planning for what is an inevitability, Mary Rauchwarter – Director of Fairwinds Forever Pet Loss & Memorial Services – would have driven down to pick Roscoe up (or I could have met her at her facility). Roscoe would have been placed on a soft bed in a special, individual cooler. Then when Mary arrived back at her office during regular business hours, she would have gently bathed and brushed him. She would have clipped his long nails that he would never tolerate me clipping in life, and she would talk to him just as I would. After this amazing care, he would be placed back into the refrigerator until I had a day or two to process the death and determine if I wanted him buried, cremated or a viewing scheduled.

What happened instead was that we wrapped Roscoe in several large plastic bags and took him to our vet’s office and left his body with a technician who came in early after my panicked phone call. I spent over $100 on his cremation (I hope), which was done with several other animals, and I didn’t even get his ashes back.

And worse, I should have known better than to not be prepared…

Grieve the Loss of a Family Pet With These 5 Steps