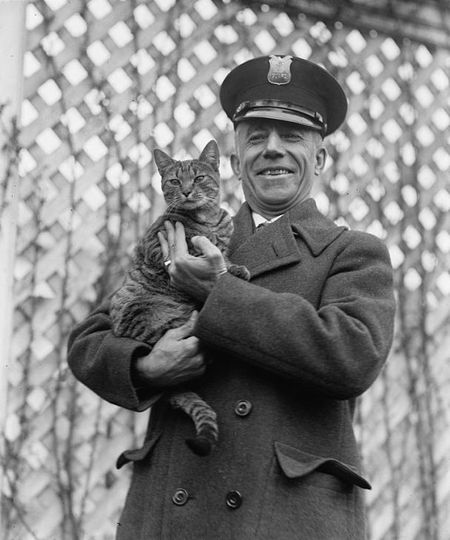 While he didn’t have too many pets while in office, President Johnson left flour out at night for a family of mice playing in his room during the days of his impeachment.

A horse aficionado, Grant had a number of favorites. They included Jeff Davis, his wartime mount; Cincinnatus and Butcher Boy, his saddle horses; Egypt and St. Louis, carriage horses; Julia, a racing horse; Reb and Billy Button, Shetland ponies. His wife Nellie had two of her own mares as well, Jennie and Mary. The family also had a parrot and gamecocks belonging to Jesse Grant. Faithful was the family’s Newfoundland and could always be found at the side of Jesse.

A gift from the American Consul in Bangkok, Hayes owned the first Siamese cat (called “Siam”) to arrive in the United States in 1878. He was also the owner of pedigreed Jersey cows, two shepherd dogs named Hector and Nellie, one goat, four canaries, two hunting pups, and one spaniel type dog named Duke. He also had four kittens, one Mockingbird, and several Carriage horses.

There is no record that Chester had any pets during his term, but very little information exists about his administration, so we just can’t be sure.

Garfield had a dog named Veto and his wife, Molly owned a mare named Kit.

Cleveland was a lover of dogs and his wife a lover of birds. Their pets include a Cocker Spaniel, a dachshund, canaries and mockingbirds. Mrs. Frances Cleveland also had a Japanese poodle called Hector.

Harrison had a favorite animal named “Old Whiskers” who happened to be a goat. Whiskers was so much trouble that Harrison once had to chase the feisty animal down Pennsylvania Avenue when it escaped the White House grounds. He wasn’t all trouble, though. Old Whiskers was often hitched to a cart so that he could carry the Harrison grandchildren around the White House lawn. Other pets include several dogs.

A Mexican double-yellow-headed parrot made up McKinley’s menagerie.

Roosevelt was one of the biggest animal lovers of White House history. In fact, he owned the most pets of all the presidents with a count of 23. (President John F. Kennedy resided in the White House with a total of only 20 animals). Both Presidents had a wide range of pets that included: dogs, birds, horses, ponies, hamsters, rabbits, pigs, snakes, guinea pigs and chickens.

Amongst the menagerie was a badger named Josiah. A little girl, who shouted the animal’s name to the President, had thrown Josiah the badger onto the Presidential train in 1903 as it traveled through Kansas. Although the badger was bottle-fed, he had a tendency to nip. On June 6, 1903, President Roosevelt wrote the following to Senator Lodge:

“Josiah, the young badger, is hailed with the wildest enthusiasm by the children and has passed an affectionate but passionate day with us. Fortunately, his temper seems proof.”

President Woodrow Wilson had a herd of sheep during his White House years. One of his favorites was an old ram named Old Ike, who liked to chew tobacco. During World War I, he allowed the sheep to graze on the White House lawn. This was part of the family’s war effort; with sheep keeping the grass trimmed, no manpower was needed for that job. When they were shorn, the sheep’s wool was auctioned to raise money for the Red Cross.

Laddie Boy, an Airedale was a famous pet of Warren Harding and he Old Boy, an English Bulldog.  Mrs. Florence Harding kept a number of canaries. 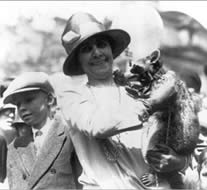 Calvin Coolidge and his wife, Grace, were renowned animal lovers. Instead of a fruit basket or bottle of wine, a voter in Mississippi once sent them a raccoon to be enjoyed as part of their Thanksgiving dinner. The Coolidge’s promptly named her Rebecca and proceeded to take her on walks, at the end of a leash, on the White House lawn. President Coolidge was so enamored of the raccoon that he built her a special house and visited her every day. What’s more, when the White House was being renovated and the Coolidge family had to move out for a short time, the President was so worried that Rebecca would miss them that he had a limousine sent to pick her up from the White House. Coolidge also had a number of other animals, including: 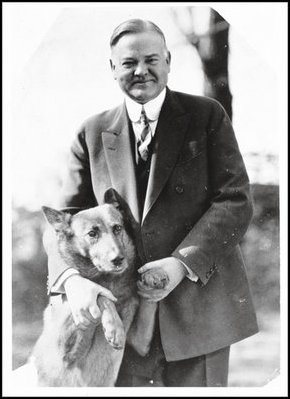 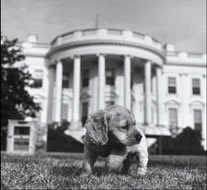 Truman was not known for his love of animals, so when a Missouri voter sent him a cocker spaniel, Truman called it Feller and left the animal to his own devices. Feller later earned the nickname, “Feller, the Unwanted Dog.” In a final move that upset the nation, Truman decided he didn’t want to keep the dog after all, and gave the animal to his personal physician.

A fan of birds, Eisenhower had a parakeet named Gabby. She was buried in 1957 near the southwest corner of the executive mansion. Heidi, his Weimaraner dog, was the (as far as we know) the only dog banned from the White House after an accident on a very expensive (and rare) rug (the rug was worth $20,000 in the 1950s!). Between a weak bladder and a propensity for jumping on people, the dog was ultimately banished to the Eisenhower’s farm in Gettysburg, Pennsylvania.