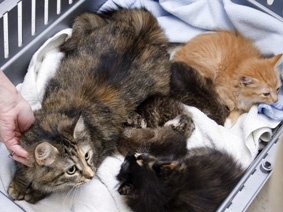 Right now, they are fuzzy little balls of fluff, but in a few weeks, they will be sporting razor sharp teeth and may be a danger to their foster mom.

The bobcats were orphaned after the abandoned house they were living in was demolished a few miles northwest of Columbia, South Carolina.

Zoe will be taking care of the triplets for the next four weeks if all goes as planned. Kittens who are not naturally nursed run a very high risk of pneumonia and death. It is hoped that Zoe will provide a “feline figure” that they can imprint on and learn how to be cats.

The bobcats will quickly outgrow their domestic siblings and are expected to reach a weight of 12-30 lbs with body length between 26-41 inches – roughly twice the size of an average house cat.

In the wild, a bobcat would typically remain with their mother until the age of 9 months. However, due to their size and wild temperament, they will be removed from Zoe at approximately six weeks when they can begin to hunt on their own.

Carolina Wildlife Care are monitoring the care of the bobcats and will be creating a large enclosure for them at their facility. The goal is to minimize their contact with humans.

“If they lose their natural fear of humans, it’s almost like a death sentence,” said Joanna Weitzel, executive director of the wildlife rescue group.

Carolina Wildlife is hoping to raise the nearly $2,000 that it will cost to develop a habitat for the bobcats. Those costs do not include the nearly two year supply of live rodents that the three bobcats will need in order to learn how to hunt. It is hoped that they will be returned to the wild in approximately 18 months.

Life in Arizona: An Environment Trying to Kill You
Stacy Mantle May 31, 2016

How to Install Coyote Rollers

Learning to Live with Bobcats

Life in Arizona: An Environment Trying to Kill You

Guide to Protecting Pets From Coyotes
PetsWeekly, 2021 ©All rights reserved.