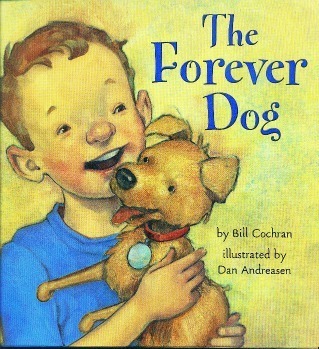 I promise, cross my heart.

In the book The Forever Dog

by Bill Cochran, illustrated by Dan Andreasen, a boy named Mike learns that promises can be kept, but sometimes they look just a little different.

Nobody knew exactly what kind of dog Corky was. He looked like he was made up of spare parts, skinny legs, and a waggly tail. But Mike didn’t care what Corky looked like. Corky was Mike’s dog, and that’s all that mattered.

From the minute Corky set paws in the house, Mike took care of him. He taught Corky everything, from housebreaking to fetch. He fed Corky and made sure he had lots of treats. Corky even slept on Mike’s bed.

But Corky took care of Mike, too. Even though he couldn’t talk back, Corky was a great listener and he paid attention to everything Mike said. Mike told Corky jokes, and he even told Corky that he loved him. Mike was sure Corky liked that.

One day, Mike had a plan. He told Corky that they would be best friends forever. They would do things together, just like best friends do. They even shook on it.

And the plan worked perfectly. Year after year, wherever Mike was, Corky was right there with him. They went on walks. They played ball. They slept in the same bed. Everything was going right according to their Forever Plan.

But then one day, Mike came home from school and Corky wasn’t there. Mike’s mom said that Corky was very sick and had to stay at the vet’s. The next morning, the vet called with some bad news.

Are you considering this book for your child? If so, pick up a box of tissues for yourself, too, because “The Forever Dog” will make animal lovers cry a river.

Author Bill Cochran tells a story that dog owners know all too well, but it’s told in a way that will make perfect sense to the child who is grieving. And despite the sadness of this tale, you and your kids will smile through your tears at the illustrations by Dan Andreasen.

While it’s true that most 4-to-8-year-olds will love this book, I think a child who’s recently lost a pet will get the most out of it. Consider it, also, for an adult who might need the loving message that’s in it. For dog lovers of any age, “The Forever Dog” promises to be a heart-tugging keepsake.

For more children’s books about animals, take a look at these fun reads: