For millions of years, humans have been fascinated with lunar movement and on August 21, we all get to experience the wonder of a full solar eclipse. Full solar eclipses are rare – in fact the last time a full coast-to-coast total solar eclipse occurred was in 1918, according to CNN. Here in the United States, we’re super lucky to see this event as it will only be visible in other countries as a partial eclipse.

But, what will our pets do to cope with this event? Should you expect any unusual behavior? The answer to that question is, “Maybe.”

Our pets don’t have the luxury of logic, so it’s normal to wonder what they’ll see and what they’re thinking. We can’t tell you for sure what’s going on in their heads, but we can give you some data about past eclipses and the effect on animals.

The first record we have of animal behavior during a total eclipse is 1544. Observers report that “birds stopped singing” and in 1560, other observers report birds “fell to the ground”.

If your pets are like most animals, they don’t spend a lot of time looking at the sky. If you feel like your pet does, go ahead and put those doggy goggles on them (but make sure they’re rated appropriately) or just keep your pets indoors during the event (the best solution).

What your pet will sense is the change in light, the possible temperature drop and the potential for extreme tides. “Inside of the total eclipse path (or near it where more than 95 percent of the sun gets obscured), the sky darkens significantly and the ambient temperature can drop 10 degrees Fahrenheit, or so,” said Edward Guinan, a professor of astronomy and astrophysics at Villanova University. “So animals and pets could easily sense this.”

Remember, when you get excited, your pets are likely to get excited. They are mirrors of our behavior. So relax, enjoy the eclipse for what it is – a movement of planets and a rare crossing of moon over the sun. 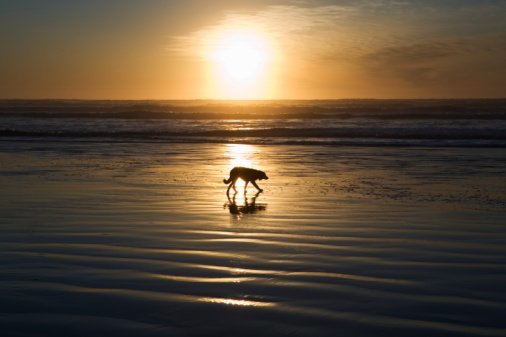 Let’s be honest – most cats won’t even be awake for the eclipse. But, let’s assume they are. Chances are good, they’re going to be lazing in the sun and tehn their sun will go away, and then the sun will be back. Most cats will probably view the eclipse as a simple cloud.

But, the moon controls tides, so maybe (since we’re all made up of vast sums of water) the celestial events of the world will impact them. If that’s the way it works, your cats could see a change in moods, or they may be a bit more rambunctious than normal, or they might sleep more than normal. Since I couldn’t get in touch with a feline behaviorist before I printed this article, I can’t tell you for sure. But, please let us know if you observe changes in your pets! 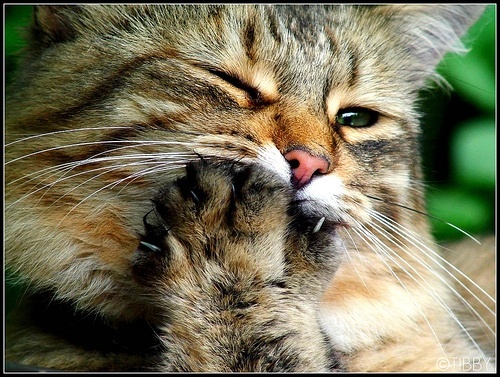 Did you know that in the solar eclipse of 1994, observers discovered colonial orb-weaving spiders took down their webs within of minute of totality? It’s true. According to a study of these spiders,

“Spiders behaved in a manner typical of daily activity until totality, when many began taking down webs. After solar reappearance, most spiders that had begun taking down webs rebuilt them. There was no significant difference in the overall activity patterns of spiders during totality across a range of colony sizes. Experimental illumination of part of a colony during totality altered web take-down behavior. While spiders in the darkness of totality began to take down webs, those spiders which were artificially illuminated did not. These observations suggest that the primary environmental cue responsible for the daily rhythm of web building behavior in this species is light level.” [Read the original report]

During a 1932 eclipse that impacted areas of the Northeast, volunteers reported that bees began returning to hives, chickens returned home to roost and “gnats and mosquitoes swarmed, (one volunteer reports his “stockings attested to the bites, for they drew blood and never let up”).

The Boston Society of Natural History watched animal behavior closely during the eclipse of 1932 that crossed areas of Maine, New Hampshire and Vermont. Volunteers report that crickets began chirping and frogs began croaking. 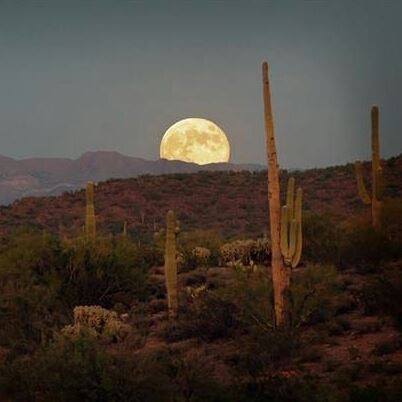 According to past reports of herbivores behavior during a solar eclipse, your cows and horses are likely to head back to the barn. Most likely, they think that the day just sort of flew by and since it’s dark, they need to head back to start the evening ritual. At least, that’s the theory. 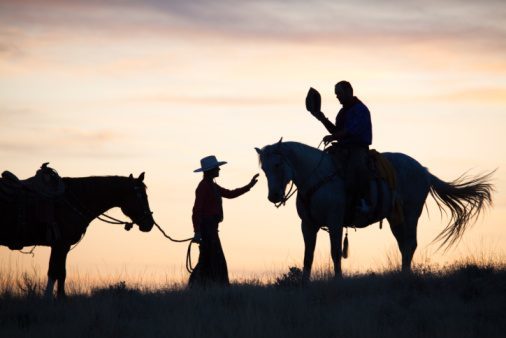 According to National Geographic, “Tora Greve was on an expedition to Zambia in 2001 when she noticed that, just as the sun disappeared, frogs began making sounds and raptors stopped circling, possibly due to the change in thermals as the air cooled.” 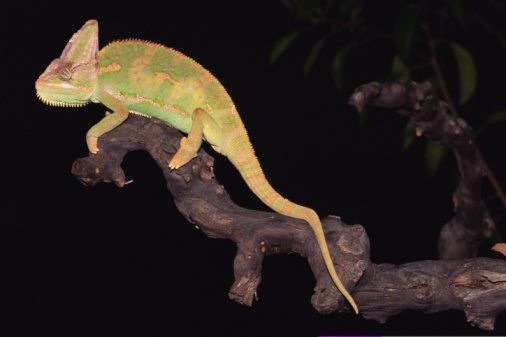 Studies in the ’60s and ’70s reported that “small, light-sensitive crustaceans and zooplankton swam upward toward the dark during eclipses, similar to how the tiny animals behave at night.” We also know that ocean plants will begin to act as though it’s nighttime, closing or opening for business as usual during eclipses. This is bound to confuse a lot of sea-going creatures.

Try filming your aquarium during the eclipse while you’re out watching it. I know a few scientists who will be quite interested in your findings! 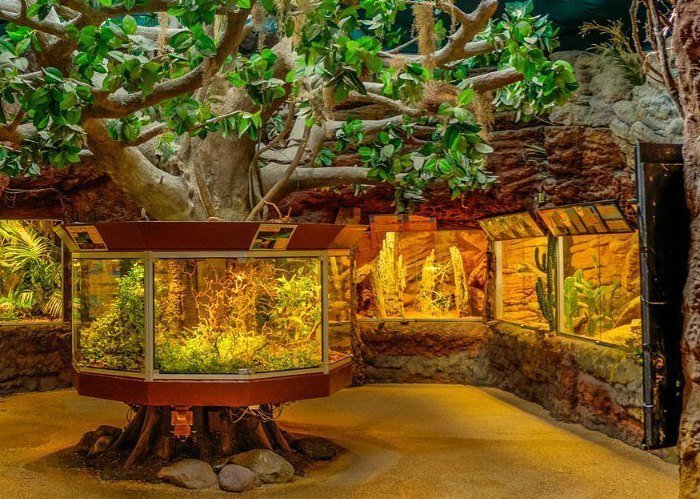 In 1984, we had an eclipse that blocked all but a ring of light (in fact, this is the one that I remember as a child). What I didn’t know that is that captive chimpanzees scaled a climbing structure during totality to see the blocked sun.

The report of a group of 16 captive chimpanzees living in Atlanta, Georgia, during an annular eclipse on May 30, 1984 reads, “At 1214 hours on the day of the eclipse, when the sky began to darken and the temperature began to decrease, solitary females and females with infants moved to the top of a climbing structure. As the eclipse progressed, additional chimpanzees began to congregate on the climbing structure and to orient their bodies in the direction of the sun and moon.

“One juvenile stood upright and gestured in the direction of the sun and moon. Sunlight began to increase at 1225 hours, and as it became brighter, the animals began to descend from the climbing structure. The behaviors exhibited by the group during the period of maximum eclipse were not observed prior to or following the eclipse nor as darkness approached at normal, daily sunset. These data indicate that a solar eclipse, a rare and uncommon environmental event, can influence and modulate the behavior of chimpanzees,” write Jane Branch and Deborah Gust, both of Emory University, write in their report. 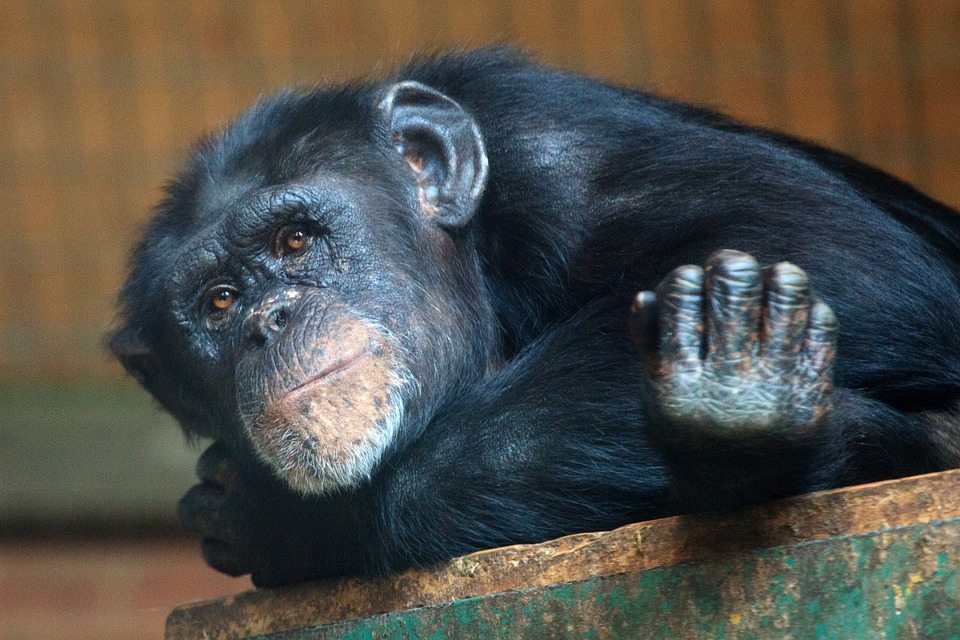 If you’re interested in helping record observations of your pets, the California Academy of Sciences is soliciting citizen scientists to record their observations of any animals they see using the academy’s iNaturalist app. The team there hopes to get more descriptions of more species covering a larger geographic area than during any previous eclipse. Here’s a quick summary of that page which tells how you can help by simply observing nature:

Will you be within the area of totality and already have your phone (or camera) out snapping pictures? Check out the Eclipse Megamovie 2017 project from Google and UC Berkeley that will compile photographs taken of the eclipse from across the country to see how you can contribute.

Are you involved in behavioral ecology? Interested in how certain life forms react to eclipses? Could widespread records of behavior changes inform your research? We are looking for both scientific and engagement partners. For questions or more information, please contact: citizenscience@calacademy.org

If you just want to read a little more about fascinating animal behavior during eclipses, we recommend these articles.

Tags
Previous Article
K9 Honey is made for dogs (but you’ll love it too!)
Next Article
Evacuating or Sheltering in Place with Pets in Disasters