How to Tell When Your Pet Is Ill 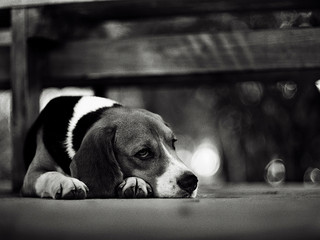 Your pet’s health can be costly if signs of illness are ignored. Whether you have a dog that becomes irritable and snaps at someone, or a cat whose condition worsens if left unchecked, resulting in high vet bills, or even a hamster that dies, upsetting your children, failing to recognize the signs of poor health in animals in your care will almost always spell trouble.

Here are some things to look out for in your furry friend:

Blood in Stool or Urine

Admittedly, it doesn’t take a vet to know that blood in an animal’s stool or urine is a warning sign. It is a possible indication of a number of things. In the urine it could indicate a kidney infection, kidney stones, or a urinary tract infection.

Blood in your pet’s stool can potentially be a more deep-rooted problem. It means that there is bleeding somewhere in your animal’s digestive system. The blood itself can give you an idea of where the bleeding is. For example, bright red blood will likely be coming from the colon, and may be a sign of constipation, whereas dark blood is higher in the digestive tract, and closer to the stomach.

Sticking with your pet’s digestive processes, diarrhea is a problem that may not be serious in itself – a simple change in your animal’s diet may have brought about the diarrhea, or some kind of minor infection that can be easily treated.

The problem, however, is when the diarrhea persists. This can lead to dehydration, which, in turn, can lead to a number of other health issues.

Swelling is a symptom that is usually easier to detect in smaller animals, but can be indicative of problems with the internal organs. It will usually be more evident in the abdomen. Swelling in areas that are mostly bone – such as the skull, or lower legs – may be something as innocuous as a bruise, but could also be an abscess.

If you have a cute and cuddly pet, the chances are you spend a lot of time in contact with them, stroking them, cuddling them, playing with them, etc. If you think that they feel warmer than usual, or even hot in certain places such as behind the ears, this may be a sign that they have a fever.

Lethargy is another symptom for an animal with a fever. Usually active or playful pets will likely seem tired and uninterested.

Though there are certain times where breathing problems are the norm, such as pedigree dogs which is the result of inbreeding, any respiratory trouble is likely to be a bad sign.

Any sudden changes in the way they breathe, even if they seem harmless, may be an indication that there is a problem. Hacking coughs are certainly a bad sign, and may be an indication of inflammation in the respiratory system. This kind of symptom will likely worsen if left untreated.

Like diarrhoea, vomiting is a clear sign that something is not right with your pet. Though it could be something harmless, such as a reaction to some toxin that need only be expelled, continued vomiting is obviously a sign that there is a bigger problem.

If you have an animal – likely a dog – that tends to chew toys, there is a likelihood that parts of the toys could block the intestinal tract, leaving any food with nowhere else to go except the way it came in.

Like diarrhea, continued vomiting can leave your pet dehydrated, which can, in turn, lead to more serious problems.

Often overlooked, behavioral changes are usually the first indicator of a serious problem. If your pet is feeling rundown or irritable, this will likely manifest in acting lethargic or snapping/lashing out at people it would not normally attack. Conversely, animals that are not usually friendly, a cat, for example, may want to snuggle up to you for comfort.

Remember, this is not a comprehensive list of everything that could be wrong with your pet, but, rather, the most generalized. There may be symptoms specific to your animal, which are an indicator of something wrong. If in doubt, a veterinarian will likely have the answers you need.

Michael Palmer is a freelance writer and pet lover based in Oxford, writing on behalf of MORE TH>N, which offers animal owners pet insurance cover to enable them to care for their pet throughout its life. These are his own thoughts and do not represent the views of MORE TH>N.