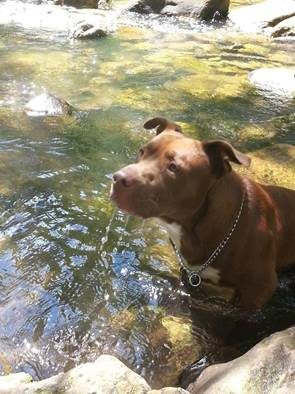 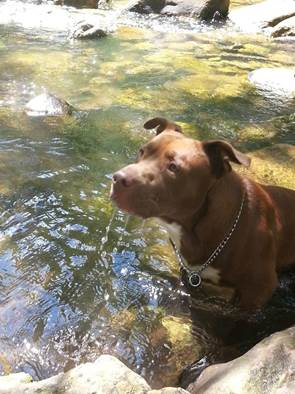 There are a lot of things wrong in today’s society. I could give you a list, but I’m sure we all have our own opinion on the issues our nation faces. Today, you get to read about one of mine: the fact that we are a throwaway society, particularly when it comes to animals.

I want to talk about what happens in a shelter when you decide to give up a pet. While most of my readers already know what happens, I’m hoping I can prevail upon you to share this story with those who don’t know; those who list animals on Craigslist as “free to a good home” or drop it off at the humane society because they believe the dog or cat “will be better off” and that since the humane society touts themselves as a “no kill” society, that their pet is safe.

Because as George RR Martin writes, “If you think this story has a happy ending, you haven’t been paying attention…”

Today, I want to tell you a story about a dog named Titus. Titus is a dog that was owned by a 20-something female. This person got Titus as a puppy and for just over a year, they lived a happy life together, sharing a home with a cat and Titus’ best friend, a husky.

I’m not sure why the girl decided to give Titus up other than she gave everyone the old, “I have to move and can’t take him with me” excuse. I’m sure he was just impacting her social life too much. All I know is when I came into the picture…

A friend of the owner sent me a picture of the dog and said that the owner had begun looking for a home for Titus.

What she didn’t know is that after the girl in my story couldn’t find someone to immediately take Titus, she went ahead and dropped him off at the Humane Society. I don’t know the details, because I was not brought into the picture until several days after he was dropped off. But I can guess she had to sign paperwork that stated he may be euthanized that same day, and I’m sure the volunteer expressed this point very clearly.

I’m sure the girl thought, “That would never put down a happy animal like Titus. He’s healthy, he’s very super friendly and well-socialized. He can sit, stay, walk on a leash and do other amazing things. He won’t be put down.”

So, she waves to Titus and gives him a big hug as a volunteer takes him away. I’m sure she shed a tear or two, and to the untrained eye, it might even appear she really cares about what happens to him – that maybe she didn’t have a choice.

But, there is always a choice…

At first, I bet Titus thought that it was a new adventure he and his owner were on. Like that time they went to the park, or the time they visited that woman who gave him cookies.

At worst, it’s like the time they went to the veterinarian for shots. But, even that wasn’t so bad because he got a treat and the pain from the needle only lasted a second.

So, Titus whines and glances over his shoulder as his mom leaves the facility. Now it’s just him and the volunteer, who seems nice enough.

But then he is led into the back and the door shuts before he can really ask her what is going on. Immediately, over a hundred dogs begin barking and yapping as they make their way down a long aisle of cold concrete. 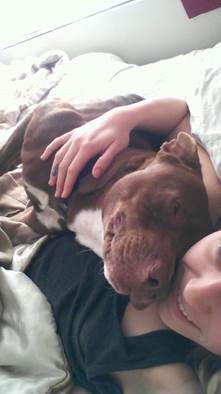 Titus has never known a life other than the one he spent with his owner. He was picked out of a group as a puppy and has been with the girl for over a year. They took care of one another. She would make sure he was fed and warm. He made sure his human was protected and loved, because that’s what pack does for another.

He comforted her when she broke up with that ridiculous man who Titus never liked anyway; he was there for her when she showed him off at the dog park. He was proud that he never fit that “general perception” of a pit bull, even when his owner dressed up “gangsta” and made him pose by her side.

Instead, he used his charm and winning grin to convince even the most hesitant person that he was a good dog.

He and the volunteer continue their walk down endless rows of barking dogs in kennels and Titus is shaking now. The noise is overwhelming and he pins his ears back to block it out. Moving from side to side, there is no avoiding the snapping jaws and loud barking and dogs jumping as high as the kennel so that it seems like they will careen over the side and eat him.

Titus isn’t a fighter. He never has been. He just wants to lie on the couch, play with his husky best friend and cuddle with his super soft kitten. He wants his family. This is a foreign land to him.

This is the Baghdad of his life.

The worker puts him into a small kennel because they are low on space. He can turn around and lie down, but just barely…

There is no window. The sun can’t warm his belly and he can’t lie on his back because it’s a cold floor that hurts his bones when he stretches out. He sits instead, his back legs tucked up so that only his paws touch the cold concrete, and shivers uncontrollably.

She must be coming back. Surely no one would ever leave him in a place like this…

A bowl of food is shoved under the door and he is forced to defecate near the bowl. He curls up as far away from his food as he can, ashamed that it happened. He punishes himself by skipping dinner.

That night, a worker comes by with a hose and he has to dance and yelp to avoid the high-powered stream of water that makes his feces fly everywhere. After the worker passes on, the floor is wet, the kennel is freezing cold, and his thin coat is nowhere near warm enough for the freezing desert night. He tries to lie down tucking his nose under his tail, but he shivers almost uncontrollably from the cold and the fear. 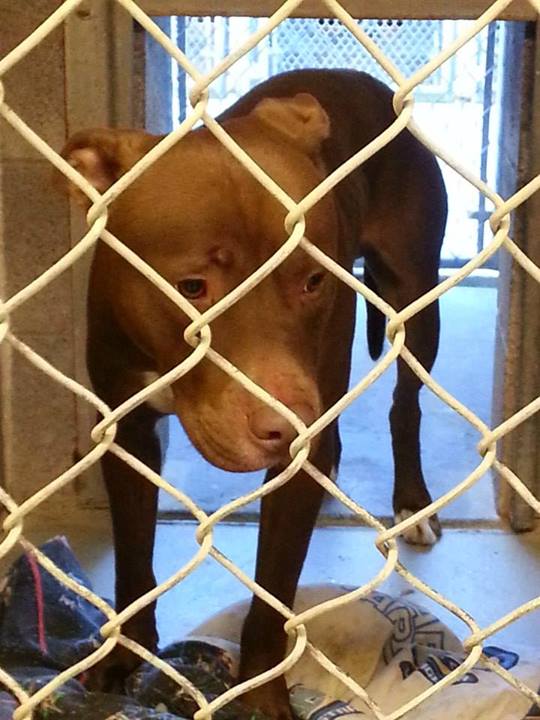 The next day, Titus tries to stay hopeful the girl will come for him. But she doesn’t. No one comes. He sits in the corner and shivers. There is no warmth, no bed, no family, no toys.

Another day passes and eventually another dog is put in with him to save space. It’s a holiday. People are leaving town in droves, many have already decided to drop their pets off so they don’t have to pay a boarding bill or a petsitter.

Titus and his new roommate don’t get along. The new dog takes up more of Titus’ precious kennel space, steals his food, and Titus is angry now… Angry that his owner left him. Angry that the people won’t help him stay warm. Angry that he doesn’t have his bed. Angry that he hasn’t eaten because the food tastes so strange.

He takes it out on the dog nearest him, but he immediately feels bad about his actions.

Soon he is alone in his kennel again, and he begins to lose hope.

He wishes the other dog was back, and that he hadn’t been so mean, because at least they were warm. He would even share his food if he were here.

A man takes him out of the kennel for a few minutes one day. A behavioral test they called it, like those standardized tests that his former owner once whined about during high school. He didn’t have time to study like she did and he’s worried that he’ll fail.

He doesn’t know what to do when they march a dog past him. If it were his husky friend, he would have run up to him, done his playful bow and they would have played. But it’s not his husky friend. It’s a little dog that barks at him so he barks back and growls, testing the waters.

Things are different in this strange place.

Then they show him a cat, who hisses at him, not like his cat friend back at his warm house. So, he growls back at her. He’s tired of this place where nothing is as it seems.

The man makes notes on his clipboard.

Soon another man puts him in a giant van and they drive to a new place with other dogs. They call it County. It’s almost the same as the other place, but much colder and louder. The smells of so many animals overwhelm him.

Everywhere there is noise. Barking dogs, hissing cats, humans yelling at them all to be quiet.

He’s tired of being in a cage. The cold concrete hurts his joints, he smells now, his head hurts from being around the constant barking. He doesn’t understand the rules here in this place; he’s hungry for food his owner used to make him. He misses his husky friend and kitten friend.

It’s only been three days and there is a marked change in the dog. He looks different, acts different. He’s aggressive towards everyone because he doesn’t understand.

County networks his photo out. No one wants to take in an angry, dirty pit bull. But online, people beg for his release, hope one person can take him.

By day seven, he’s given up. So has Animal Control.

By now, I have been notified that the girl has dropped Titus off at the Humane Society (I don’t know that he’s no longer there). I put out an email to our rescue base. But it’s one more dog in need of a home, lost amongst thousands of other emails of dogs that need to be pulled for a stay of execution. We put a notice up on facebook and twitter, but even with a large readership, it doesn’t reach the right people.

I finally found a foster family for Titus. But then I couldn’t find the dog. By the time I managed to track him down in County, it was too late… 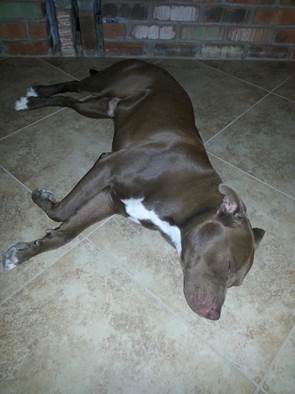 He was euthanized in a back room with a veterinarian and a employee holding him down.

You have a responsibility to your animals. Are there legitimate reasons for giving up a pet? Sure. They don’t include “he sheds too much” or “he doesn’t match the carpet” or “she sprays” or “he growled at me”. Those are all things that can be fixed.

I feel like Titus deserved some type of tribute – a memorial of sorts – for his time on this earth.  His story has been a tragic one. He deserved so much better in life.

Rest in peace, Titus. I’m so very sorry that your humans failed you, that we failed you, and that society failed you. You deserved so much better…

For everyone who has a dog – please think about what you’re doing before you do it. Take a moment to put yourself in the animal’s position. Please don’t abandon a member of your family. And please don’t make me have to write any more stories like this…

Guide to Hiking Etiquette with Dogs
Stacy Mantle May 20, 2015

The Truth About Pit Bulls

Happy Father’s Day – From the Dog

Guide to Hiking Etiquette with Dogs