Dog Collars Through The Ages: A Short History 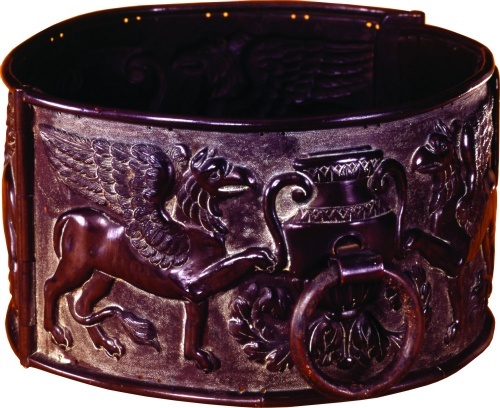 If you’ve ever wondered what the first dog collars in history looked like, you’ll have to travel to Leeds Castle in Kent, England to view the most extensive collection of antique dog collars. In the event you can’t afford the trip, we have a sneak peak at what you would see.

Spanning five centuries, the extensive collection was originally assembled by Irish medieval scholar John Hunt. In 1979, his wife Gertrude presented the collars to Leeds Castle in memory of her husband and the collection has since been extended by private donations and purchases to become the largest collection of medieval collars in the world.

Dogs have always been present at Leeds Castle – hounds for hunting, mastiffs to guard the Castle gates, and lapdogs to grace the apartments of the widowed queens.  With the help of Leeds Castle, PetsWeekly has compiled a brief look at dog collars through the world and throughout the centuries…

This was a time when dogs were well-regarded for hunting and guarding. Ancient Egyptian hieroglyphs show dogs resembling large greyhounds with thick collars designed to protect the dog’s throat while adding a level of control. They were both functional and decorative, much like the hound collars of today.

You may remember The Odyssey, by Homer

, and most particularly the story of Odysseus and his dog, Argos. For those who need a refresher course: after a twenty-year absence, the only creature to recognize Odysseus upon his return to his home was his faithful dog, Argos.  This story sets the tone for how faithful our four-legged friends have been through the years.  In fact, the relationships between people and pets were so intense, it’s said that Caesar once chastised his citizens for being more focused on their dogs than their children! 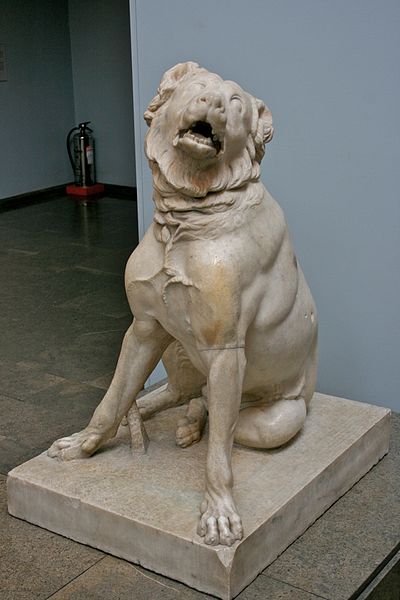 The bond between owner and dog was so strong that messages were often inscribed on the collars of dogs. In the ruins of Pompeii, the remains of a nearly perfectly ash-preserved dog were found wearing a collar with a message inscribed from the owner, thanking the dog for saving his life.

The Romans were well known for inspiring fear into the hearts of their enemy with Canes Pugnaces (aka “War Dogs”). These large-breed dogs were a breed known as Molossus and while it is now extinct; the Mastiff, St. Bernard, Great Pyrenees, Rottweiler, Great Dane, Newfoundland, Greater Swiss Mountain Dog, and Bernese Mountain Dog are believed to have derived from the breed.

These dogs not only wore metal collars with spikes, but also armor specially designed to protect the dog as they lunged for the throats of enemies.  They were often sent in as a pack to attack elephants and horses of enemies.

Things were tough all over during the Middle Ages and man’s best friend moved from companion to working dog. Many of the earlier collars dating from the 15th, 16th and 17th centuries were designed to protect the dog. Collars became more utilitarian and less decorative – primarily through the use of leather collars with long, fearsome spikes.  It was a time when wolves, bears and wild boar roamed the forests of Europe and the vulnerable throats of hunting dogs were shielded by broad iron collars bristling with fearsome spikes. 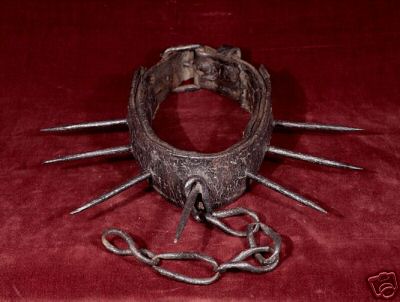 Bear baiting and wolf hunts were common during this time period, and dogs wore the heavy collars to help protect them in these gruesome sports.

On the other hand, small dogs became a fashion statement as royalty found value in them to provide warmth and attract the many fleas that plagued royalty.

It was believed that the pesky fleas preferred the dogs to the people, and the added benefit was that it kept the laps of royalty warm on cold European days – hence the term, “Lap Dogs.”

Also on display are the exuberant German and Austrian baroque leather collars from the 17th and 18th centuries, often decorated with metalwork and velvet, which were intended mostly for decoration and identification of both the dog and its owner.

The engraved silver collars, some fashioned by leading silversmiths of their day, form an interesting section of the museum.  Many come in pairs joined by short chains, which were often presented as awards to show or racing dogs.

By the 1900s, working dogs were prized for their breeding value. They were either security guards or working companions, particularly to farmers who relied on them to protect their livestock from attack and hunters who counted on them to retrieve fallen animals during a hunt.

Oftentimes, dogs would wear collars that contained a lock and only the owner had a key. In the rare event that a dog would turn up missing, or in the more likely event that a dog was stolen, ownership disputes would be settled by who had the key to open the dog’s locking collar.

The collars were fashioned in the form of simple brass rings, with rolled edges to prevent chafing. Street traders sold these collars and a contemporary illustration shows a London dog collar seller of the 1850’s laden with brass collars of all shapes and sizes with prices varying from 2 pence to 15 pence.

Agricultural needs decline and friends are on the rise. The advent of the internet has allowed us more time to stay at home with our faithful four-legged friends and this has created a rise in collars being used as fashion statements. Of course, our pets still serve a need, but the need is more emotional than survival. Stay tuned for our next installment of collars and how to choose the best collar for your dogs and cats.