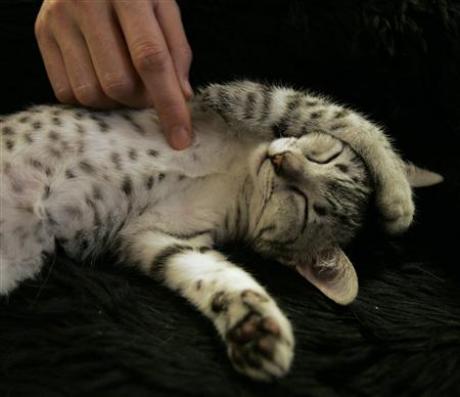 Cats often surprise us with their unpredictability and, at times, they may even seem downright ditsy. Big Boy, the extremely large cat who charmed my mother for more than fifteen years, was fond of darting into the kitchen sink. There he would sit, staring into the dish drainer as if it contained the answers to the mysteries of the universe. To avoid disrupting his peaceful meditations, my mother would use the bathroom sink upstairs. It was clear who owned whom in that relationship, but it begs the question: Why do felines like Big Boy behave in such puzzling ways in the first place?

“The why part [of cat weird] is easy — cats and people are different species with different genetic evolutions,” says Oceanside, California-based Animal Behavior Consultant Arden Moore, who is the author of pet books such as The Cat Behavior Answer Book: Practical Insights & Proven Solutions for Your Feline Questions (Storey, 2007). As an example of a basic difference between cat and human behavior, Moore points to the fact that cats “rank as one of the top snoozers of all creatures, averaging around 16 to 17 hours of sleep each day. Most people are lucky to get seven hours of sleep a night.”

Karen Santos, companion animals manager at the International Fund for Animal Welfare (IFAW) in Yarmouth Port, Mass. contends that cats have a “better sense of humor” than humans. She attributes this to the fact that cats “live more in the moment,” adding that “They don’t hold grudges and when they do, they are short-lived and specific to a particular event.” That distinction could explain why one of my own cats, Miss Manners, tends to sulk in the coat closet for about an hour after returning from a trip to the vet. After her kitty retreat has ended, Miss Manners shows she has forgiven me by rubbing against my ankle and purring sweetly.

The “closet-sulking cat” illustrates just one kind of seemingly flipped-out feline. See if your own cat falls into one of the following types:

This is a feline that, despite all scientific claims to the contrary, enjoys swimming and being near water. Your favorite feline may be exhibiting an evolved trait linked to breed. “Some cats love to swim, especially certain breeds like the Turkish Van,” explains Moore. In their pursuit of water, these cats may even hop into the shower stall or bathtub to join their humans.

Bowl probers sometimes paw their water bowls before they drink. The reason: it’s following the pattern of “wild cat ancestors who need to test the water to make sure it is safe,” says Moore. Cats’ paw pads constitute one of their most sensitive areas so, “Pawing the water helps some indoor cats check for any possible ‘dangers’ lurking in the water bowl.”

If you have a dominant and confident kitty, you may be in luck. Moore says this feline type makes the perfect candidate for toilet training. Before you toss the cat litter box, though, be forewarned. She cautions, “This training can be thwarted if you — or others in your home — forget and put the lid down or shut the bathroom door.”

The herb-loving cat is always more than eager to get its paws on catnip. Feline fans of this perennial member of the mint family roll in it, sniff ecstatically at it, and close their eyes blissfully as they indulge. But, as many as 30 percent of adult cats have absolutely no interest in catnip, according to Moore. “Some cats prefer honeysuckle, which must be moistened to release its active ingredients,” she adds.

Some cats seem to have a human earlobe fetish. They’ll lick the ears of their owners, or even those of startled guests, with apparent enjoyment. Moore offers a simple explanation: “A young kitten separated from its mother before being weaned may be determined to lick your earlobes with its rough tongue. It may mimic the suckling it enjoyed while nursing.”

Santos notes that some cats scratch around their food dishes, almost as if they’re trying to “bury” their food under the kitchen floor or other surface. This behavior may reveal their lineage. “The wild ancestors of cats would bury their food to save it for later, so they could return to it.”

Has your cat ever suddenly dropped a toy mouse in your lap? Several cat owners have reported receiving such unexpected gifts, whether they want them or not. The moment becomes even more memorable if the mouse was a once-live real one. Santos explains that it is your kitty’s way “of showing affection.”

Predator to the Invisible

Cats playing games with a speck of dust are not, contrary to their humans’ bewilderment, losing their kitty minds. That speck of dust or ray of sunlight that they are chasing serves as entertainment, according to Santos. Call it the “Project Runway” or “Top Chef” equivalent of relaxing amusement in the kitty’s world.

The Crazy Running Back

Almost all cat owners have observed what some call the “kitty crazies.” Their cat abruptly runs around, occasionally leaping into the air like a ballerina or a football star on too much caffeine and then just stops as if nothing had happened. Santos theorizes this behavior can be attributed to a feline’s inherited need to stay in shape for hunting.

Whether your cat has a bathtub fetish or, like Miss Manners, is fond of kneading hats, one thing is clear: Such behavior makes perfect sense to felines. So long as the behavior isn’t destructive to you, your cat and your surroundings, it’s best to take inspiration from your cat. Live in the moment and think of cat weird as the new feline wonderful.

Tags:
Previous Article
Cats are from Venus, Dogs are from Mars
Next Article
Kids and School – What About Fido?