Cat Toys: When the Thrill is Gone 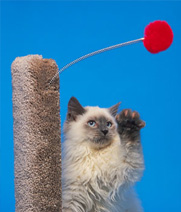 Pet stores don’t sell dangling cable wires in their cat toy sections. But if they did, it may just be the next bestseller. The long cable that suddenly appeared from Jennifer Moore’s apartment rooftop was all it took to keep her cat up every night for a week. “She seemed to be mostly staring, almost poised to pounce, but she also tried to bat it through the closed window,” said Moore of her 5-year-old tabby cat Sari. “I hadn’t seen her so excited about a ‘toy’ in a long time.”

The newness of the wire — as well as its split ends that could have looked like a trapped fly through the window — probably entranced Sari. The toys in her basket were familiar to her, their behavior predictable in contrast to the new and exciting wire. It turns out that, like people, cats get bored with their old toys. But they don’t have to lose interest. L.A.-based cat behaviorist Marva Marrow has suggestions on how to make every play day fresh and fun for you and your feline companion.

“I recommend not having so many toys around, just a few at a time,” says Marrow. Cats aren’t great decision makers. When they have too many options, they become unable to focus and ultimately choose nothing hence, your untouched collection of stuffed mice. Too many toys will make each one unattractive to your cat. Keep interactive toys out of your cat’s reach altogether when you’re not home.

If you already own more than a few cat toys, you don’t need to purge the collection. Instead, put all but three in the back of the closet for a week or so. When that time has passed, hide those away and pull out three more. The three you choose should be as dissimilar as your toy stash allows. “For cats that respond to catnip, the toys that let you put fresh catnip in will be intriguing each time you refill them,” says Marrow. Purchase the catnip in bulk and leave it in your freezer until you’re ready to use it.

While cats have idiosyncratic tastes, some general rules apply. For example, most prefer texture to sound, making a furry stuffed mouse more enticing than a rubber one that squeaks. Cats are also smart, and not easily fooled by mechanical prey. “The mechanical motion of a wind-up mouse is generally not so interesting to them for very long,” says Marrow. What will remain appealing to most cats is any toy they can bat around, especially those that are textured (e.g., plush toys and balled-up cellophane). “Those leave a lot to their imagination,” Marrow explains.

Cat play is not just for fun — at least not in your furry friend’s mind. “When cats play, they’re practicing their prey behavior,” says Marrow. And if you’ve ever watched a cat actually hunt a mouse, you know that it doesn’t make a quick kill. “They torture the thing, toss it up in the air, force it to move — they like that aspect.” Cats do the same thing with their toys. That is why they can spend hours batting a ball of tinfoil, which they can essentially make behave like a rabbit.

Most cats are unable to follow quick movement. When interacting with your feline and its toys, don’t swing them wildly through the air. “Drag a pole toy or string toy along the ground slowly, just out of your cat’s reach. That will get it intrigued,” says Marrow. You can also attempt to mimic the movement of their natural prey with their pole toys. “Hold it still so your cat can focus, and then wiggle it a little, stop, and then wiggle more. That’s how a cricket would move.” Once your cat is engaged, the movement can become more vigorous.

6. Use What You Have

Your cat’s favorite plaything may turn out to be the plastic ring from a carton of milk, or the aforementioned ball of cellophane. Socks filled with catnip, small balls of yarn, or ping-pong balls let loose in a dry bathtub may also bring your cat more hours of pleasure than the most expensive store-bought toy.

As for Jennifer Moore’s dangling wire, the cable company came to do repairs, and it disappeared forever. Not surprisingly, given the nature of cats, “Sari didn’t seem to miss it,” said Moore.

Tags:
Previous Article
The Winners are Announced
Next Article
Cat Product Trends for 2010