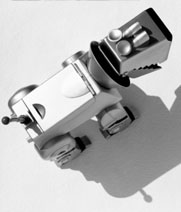 Imagine the delight residents in several St. Louis nursing homes recently experienced when a dog, tail wagging cheerfully, pranced into their community rooms. Like all well-socialized dogs, this mutt, named Aibo, responded to the elderly residents’ petting and praise.

But there’s a big difference between Aibo and the typical terrier. Aibo is a robotic dog. Although rover robots could never replace a real, live dog, new findings do suggest they might help alleviate loneliness when owning an actual dog is not possible.

The Aibo visits were part of a Saint Louis University study that evaluated how nursing home residents would respond to a gentle, live dog named Sparky, as well as the robot dog. The researchers were surprised to discover that the mechanical version could stimulate human and pet bonding.

William A. Banks, a staff physician with the Veterans Affairs Medical Center in St. Louis, conducted the study with his wife, Marian Banks, RN. The couple lives in St. Louis, Miss., where they have two dogs and eight cats. Their dog, a rescue from the Society for the Prevention of Cruelty to Animals (SPCA), is the live dog that was used in the study.

“Aibo was developed a number of years ago by Sony, but production discontinued a little over a year ago,” says Dr. Banks, who is also a professor at St. Louis University School of Medicine. “His software is quite sophisticated and you feel like he is really interacting with you and relating to you.”

Like a real dog, Aibo wags his tail, turns his head and makes noises. Dr. Banks, however, compares this faux Fido’s actions to R2D2 from “Star Wars” rather than to a real dog. For example, Aibo also interacts by “flashing his lights in the area of his eyes” and by wiggling his ears.

The couple conducted the research to determine program options for individuals who yearn for pets “but cannot otherwise have them (as in nursing homes, assisted living programs and other situations) and what benefits can or cannot be derived from interactions with animals,” Dr. Banks explains.

As a dog owner himself, Dr. Banks admits, “It is hard for me to think that I personally would trade my dogs for a robot.” He emphasizes, however, that the purpose of the animal-assisted therapy study was not to evaluate if robotics could serve as a substitute for live pets, “and that is not what we advocate.” The study was designed to focus on whether animal-assisted therapy could help nursing home residents.

For those of us who are fortunate enough to enjoy 24/7 access to our beloved dogs, it is hard to imagine that a mechanical mutt could ever improve upon the real dog deal. Amber Burckhalter agrees. She’s the owner of K-9 Coach, a dog-training company in Atlanta that offers obedience classes, private training and board training. After training dogs for more than 20 years, Burckhalter says that her favorite aspect of her work is “both watching and helping build the bond between humans and their dogs. People often own a dog for the unconditional love and companionship and just the warm touch of an animal.”

In addition, she has noted that “for lots of people, a dog is the only thing in their lives that just loves them. Nothing can replace that.” Burckhalter has observed bonds so deep between a human and a dog that she felt “they can almost read each other’s minds.” She adds, “People often own a dog for the unconditional love and companionship. A robotic dog, while very low maintenance, will never completely fill that void for people.”

Learn more about Technology for Pets: