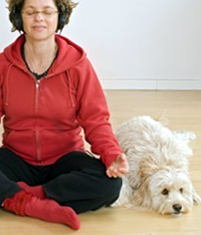 For thousands of years, people have positioned themselves in poses like The Lotus, Salute to the Sun and Downward-facing Dog in an effort to achieve inner peace and improve physical fitness. These individuals practice the ancient art of yoga, whose benefits are widely touted.

Only recently, though, have some devotees come to realize that yoga and its resulting benefits can be extended to their canine companions. That’s why increasing numbers of people bring their pooch to yoga — or as it’s more popularly known, doga.

“This is a great socializing experience for dogs,” says Kimberly Wilson, a yoga instructor who conducts doga classes in Washington, D.C. “It’s a wonderful bonding experience to be together with your dog while doing something that’s good for you.”

That said, doga means different things to different instructors. For example, Wilson conducts her classes for humans while the dogs simply mill around. “When I lead a dog class, I’m not taking the dogs through any poses,” she explains. “I just encourage people to bring their dogs while I teach yoga to the people.”

Other instructors, however, take a more dog-centered approach. Seattle yoga teacher and licensed massage therapist Brenda Bryan teaches human students to help their dogs perform doga poses. “As we lift, stretch and massage [the dogs], we’re teaching them to trust in the relationship they share with us,” explains Bryan. “They also receive physical benefits, such as relaxation, stress release and an improvement in circulation and range of motion.”

[heading style=”modern-2-blue” heading=”h1″ color=”#996633″ align=”left”]Doga for Dogs Big and Small[/heading]
Dogs of any size can get into doga. Although many poses appear to involve lifting a dog, which would be problematic for large dogs, lifting is not a requirement. “I have a mastiff who comes to class regularly, and recently a Great Dane also attended one of my classes,” says Bryan.

Here are some doga poses that dogs of all sizes can perform easily with your help:

Chaturanga
Have your dog lay on its stomach while you stroke its back.

Chair
This pose requires your dog to sit on its hind legs while you hold the dog from behind and raise its front paws in the air.

Savasana
Your dog lies on its back while you stroke its exposed belly.

Puppy Paw Mudra
Created by Bryan, this pose requires your dog to lie on its stomach with its front legs extended outward. You kneel down behind your dog and place your head on its back while holding its front legs outward with your arms. Then you turn your head to one side.

Heart-to-hound Mudra
This pose, also created by Bryan, simply requires you to place one hand on your heart and the other on your dog’s heart. Close your eyes and breathe slowly.

[heading style=”modern-2-blue” heading=”h1″ color=”#996633″ align=”left”]Getting Started[/heading]
Think doga might be a great way for you and your dog to spend time together? Here’s how to get started:

Be realistic
Don’t expect your dog to be a canine contortionist. Striking a classic Lotus pose is probably far beyond your pet’s physical, much less mental, capability. That doesn’t mean your dog can’t get into the spirit of yoga along with you. Plenty of poses are easy for both people and pooches to master.

Recognize talent
Your dog may not be able to do a Lotus or a Tree, which involves complex human body movements, but many everyday canine postures are very similar to yoga poses. For example, a typical doggie play bow — front legs on the ground, hind legs standing, rear end and tail in the air — is similar to the classic Downward-facing Dog pose practiced by human yoga adherents.

Look for classes
Many major metropolitan areas hold occasional doga classes. For example, Wilson offers her classes to raise funds for the Washington Humane Society. If you can’t find a doga class, consider searching for a traditional yoga class or instructor. Ask if that person would be willing to teach doga or at least allow dogs to join their humans. YogaFinder online contains a searchable worldwide directory of yoga classes.

Do it at home

If you can’t find a doga class anywhere, don’t despair. Doga is something you most definitely can try at home with your best friend. Take a look at Bryan’s book, Barking Buddha: Simple Soul Stretches for Yogi and Dogi

As you and your dog practice doga together, you’re both likely to gain more than simply a few minutes of quality time together. “The word ‘yoga’ means union — and dogs are pack animals, so they are all about union,” says Bryan. “Union in yoga means discovering a feeling of connection to all living things. In doga, we move toward that union by first feeling that open-hearted connection to our dogs, then opening up to a broader connection.”