Clearing the Air with A BlueAir 203 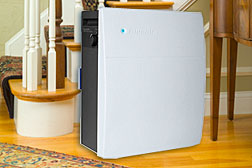 There are many air purifiers on the market these days. As pollution is on the rise, so are medical issues that relate to breathing, including asthma and allergies. If you don’t have any problems yet, congrats. But if you do, or if you have been experiencing a general “malaise” then listen up: It could be your air quality.

and after two months of it running in one of the dustiest areas of the country, I can officially report that I love having this unit in place. The 203 features electronic particle and gas sensors that confirm the unit is effectively removing allergens, which includes pollen, DUST, and even pet dander. It monitors itself – so you don’t have too!

The 203 is designed for rooms up to 240 square feet, but our floor plan is pretty open, which means it was constantly cleaning at least half of our 2,200 square feet home. That also means it is completely recycling the air twelve times per day – pretty amazing for such a small unit. Even more impressive is the fact that it costs no more than running a single light bulb.

[note icon=”yes”]We received product samples from the company mentioned above, however our opinions are our own and we are under no obligation to create a positive review or article. We occasionally utilize affiliate links when linking out to products.[/note]

After letting it run all summer, when the desert air becomes stagnant and the heat unbearable, I can tell you that this will be the perfect unit for those who have to shut themselves in all winter. Especially if you have pets. It is remarkable at cleansing the air of allergens such as dander, which is floating around unseen by the human eye.

You can set it on three speeds, but we kept it on medium, because that’s all it needed. It did that good of a job…

It also works to eliminate odors. My husband and I proved this after making a particularly stinky fish for dinner one night. Within an hour, there was no odor from our dinner. I would buy this unit for that feature alone! But, what we really love is the clean air we now breathe and the fact that I have not had to take Benadryl for days at a time.

The system utilizes HEPASilent Technology, which is filtration technology that combines advanced filter media and encapsulated ion particle charging chamber. What that all means is that it changes the air (recharges it, per se) and then releases clean air.

It traps 99.97% of the airborne allergens down to 0.1 micron in size. Now I can’t confirm that claim without a microscope and 4 more years of college, but I am going to take them at their word.

You’ll have to change out the filter about every 6 months. The Replacement Filter

, runs about $50. We are in a very high allergen home and assumed we would need to change it out more frequently, but it’s been running great and we haven’t received a notification from the remote (a small remote that comes with it tells you when you should change it out – but it only measures the date, not the actual use) so we’re still in good shape three months into it.

You’ll need to put it in an area where it can “breathe”. It needs access to air to run properly so you can’t really place it against a wall. It’s a little large – smaller than a box fan by maybe one-third – but it’s very quiet and I love the fact that it’s mobile.

You may have already implemented a purifier into your home, but if you haven’t, you should absolutely take a look at the BlueAir 200-series.

A Month with the Febreze Air Purifer #KeepItFresh