My Dogs Ate Your Elf on a Shelf 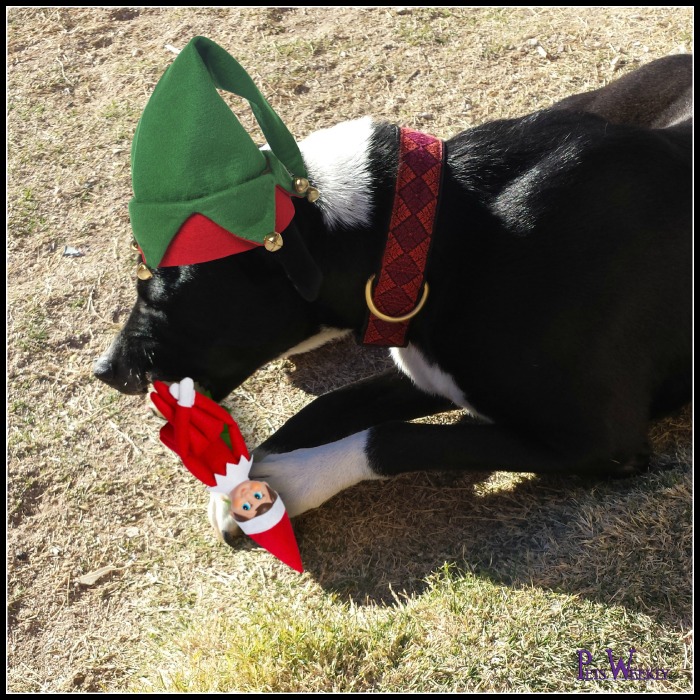 I’m sure this post will strike fear into the hearts of Elf on the Shelf fans everywhere. It will probably give little kids nightmares and send shelf elves scurrying home to the North Pole forever. But you know I had to write it…

If you’re not familiar with the concept of Elf on a Shelf, (and as an animal lover who doesn’t allow impish elves to lie idly around the house, you may not), allow me to enlighten you.

Elf on a Shelf was invented as a way to make human kids behave during the holiday season. All it does for animal lovers is create another mess to clean up, but that’s another story.

As the story goes, the Elf on the Shelf is a family’s “personal elf” sent by Santa himself to keep an eye on the family’s behavior during the holiday season. Each night from Thanksgiving to Christmas, the elf reports back to Santa with either a good or a bad progress report. He does this through magic. If you touch the elf, it loses its magic and therefore can’t report to Santa, which is very bad. If you don’t touch the elf, and he successfully reports back to the toy man, you get a good stash of holiday goodies. The Elf on the Shelf also determines whether you make it onto the “naughty” or the “nice” list. If you’re nice, you’re in the clear. If you’re naughty, no gifts for you. And Elf sees everything…..

When I was growing up, we had something similar – but we called it “coal in the stocking” and in cases of severe trouble, we had “wait until your dad gets home.” I guess kids don’t have that anymore. Instead they have magical elves silently judging them.

Each elf is given a special name. My sister’s elf is named Biscuit. Other families call their elf Buddy or Jingle – it’s quite like naming a pet. You observe your elf’s personality (they are forever getting in trouble) and you assign them a name. If you’re really committed, you can register your elf’s name in a large elf registry (which I’m sure is AKC elf-certified). 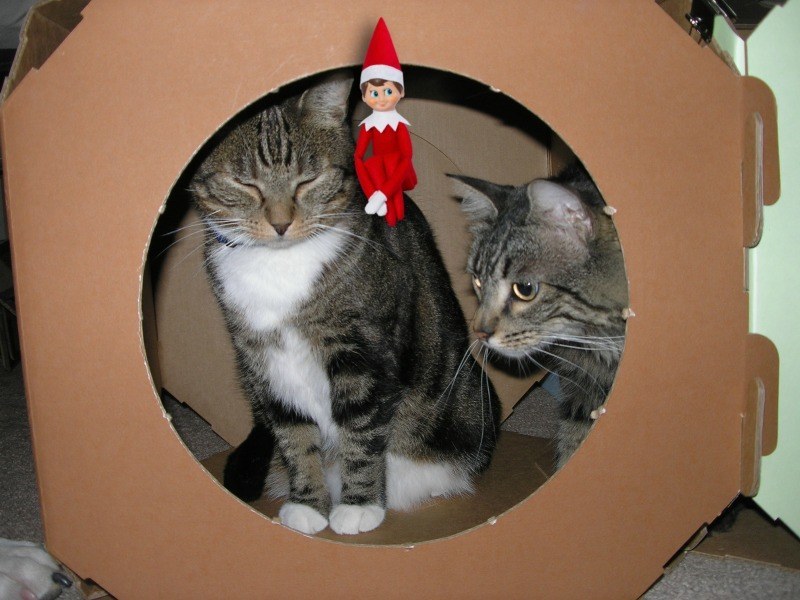 I’m sure the registered elves are perceived to be of more value. (Personally, I would prefer a mutt elf – because I am betting they have slightly better personalities and are probably a bit more unique in their looks.)

After seeing all the fun things that Biscuit does to my sister and her family, I was thinking it may be fun to adopt an elf this year. A mutt elf, that is. But then I realized I already had one. Actually, I have many of them.

You see, Elf is a troublemaker who likes to wreak havoc in the middle of the night while people are sleeping – which is remarkably similar to what my cats do. You can’t touch Elf, or he loses his magic (which is also similar to a few of my wilder cats). Elf likes to rearrange things, often for no reason at all (which is what both my dogs and cats do). He also likes to hide things in strange places (which is what my ferret did for years).

The difference between Elf on a Shelf and my pets are that my pets are more fun to photograph and they don’t judge me. Well, most days they don’t judge me (unless I have not completely filled their food bowl or have missed feeding time by a few minutes). They also never limit their mischievous behavior to the middle of the night; although being crepuscular in nature, they are more active at dusk and dawn.

So, I don’t see much point in participating in the Elf on a a Shelf tradition, although it looks like fun. My reasons or non-involvement are vastly different from those of others. Quite frankly, I just don’t need another creature wreaking havoc in my home.

My dogs would probably eat it anyway. Mischievous elves have a remarkably short lifespan in this house..

Tags
Previous Article
Giving Back with 1-800-Pet-Meds
Next Article
Designing Your Mud Room for Dogs
PetsWeekly, 2021 ©All rights reserved.