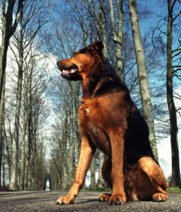 Dogs are so furry that even the most observant of owners can miss details about their appearance. Take dog whiskers, for example. They’re usually visible above the eyes and on the muzzle, but did you know that your dog likely has a tiny beard of whiskers below its jaws? If you examine this area on your pet, you should notice some dark skin sprouting a hair or two. That colored skin resembles what we call a beauty mark in humans. On your dog, it’s actually a collection of nerves, and the thick hairs that sprout from it are not just fur. These whiskers are called “vibrissae,” and like top-secret FBI tools, they allow your dog to investigate everything from you to your home.

The hidden power behind your dog’s vibrissae is their sensitivity. They are extremely receptive to touch. Unlike fur, they have functions other than just keeping your dog warm or cold. They’re designed to transmit detailed information about movement to aid your dog’s guidance and balance.

Vibrissae are typically found in clumps, although the arrangement can differ depending on the particular individual. According to Carol Foil, ACVD, a veterinary dermatologist consultant with the Veterinary Information Network in Davis, Calif., “The little beauty marks are mounds of nerves and other connections that make the whiskers function as tactile (feeling) hairs. Dogs have one mound of compound follicles, but they can have more than one whisker in the mound.”

Felines sometimes use their whiskers for feeling their way around places during the night, but cats see better in the dark than canines do. Dogs often find themselves in situations where the ability to sense movement is useful, and at times, that ability is even more important than being able to see. That’s where the vibrissae come into play. They can function as a guide when, for example, your dog walks down the hallway towards the water bowl at 2 a.m. “For dogs who like to dig and tunnel in the dark, it’s good for them to know where their face is located, how far it is from a wall,” says Dr. Foil. “That’s why the vibrissae are there; they let them know where their whole face is.” She adds, “Dogs can then tell what’s happening all around their face in a tunnel, or when they’re going after a mouse in the dark.”

Vibrissae are great from the standpoint of dog owners because they require absolutely zero maintenance. All you need to do is leave them alone, but that isn’t as easy as you might think, given how often you probably pet your dog’s head. Your dog won’t like it if you touch or otherwise move the vibrissae. “They are highly innervated (supplied with nerves), so if they touch something or if the wind blows on them, there will be feedback to the dog’s brain,” says Debra Eldredge, DVM, of Vernon, New York, author of the Dog Owner’s Home Veterinary Handbook (Wiley, John & Sons, Incorporated, 2007). If such sensory input were not useful to your dog, the evolutionary process would have eliminated these motion-sensing hairs from its anatomy.

Because these hairs are so incredibly sensitive, take special care not to touch or brush one against its natural direction because that could be painful for your dog. Since these hairs are sensitive enough to detect wind flow patterns, you can imagine how painful it would be if you brushed them against their normal direction of growth. You need to literally avoid rubbing them the wrong way. Just as your nerve-filled fingertips are more sensitive than other parts of your body, your dog’s vibrissae are ultrasensitive. They’re meant to respond to minimal physical input. If you were to play with these hairs, even in jest, your dog might feel as though you pinched its face, and not in a good, pleasant way.

Usually the only time you might fuss with vibrissae is if you plan to enter your pet in a dog show competition. In this case, you would have four options: surgical removal, plucking, trimming or just leaving the whiskers alone.

People tend to think of facial marks or moles as some kind of blemish, but you should see your dog’s whiskery features as beauty marks. Think of them as being more tactile than Marilyn Monroe’s or Cindy Crawford’s famous beauty spots, yet no less becoming. Your dog’s beauty mark is both attractive and highly functional, and there’s no blemish in the world that can claim that.