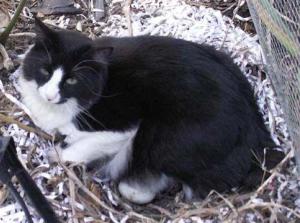 Bustopher, a cat from Australia

Most cats eat chicken eggs. This cat sits on them.

The four-year-old Australian barn cat is suffering an identity crisis, but it’s “a cute ailment.”

Naomi Oliver’s chickens laid their eggs, but didn’t show too much interest in hatching them. And so Bustopher took over for the negligent hens.

“I am not sure if he knows that he is a cat, he doesn’t really behave like one,” Mrs Oliver told the Northern Territory News.

“I was looking for Bustopher and found him sitting on the eggs, obviously trying to incubate them,” Mrs Oliver said.

“When he was still there after three days I started wondering what was going through his head – but I am sure he thought he was doing a great job.”

Oliver reports that Bustopher only leaves the “nest” once or twice a day to grab a quick bite to eat before heding back to his hatchlings.

However, his attention span seems to be wavering and proves that even felines have their limits. “When nothing hatched after three days, he gave up on sitting on the eggs.” Oliver reports.

Are Cats Purring Us Into Submission?
Stacy Mantle March 10, 2010