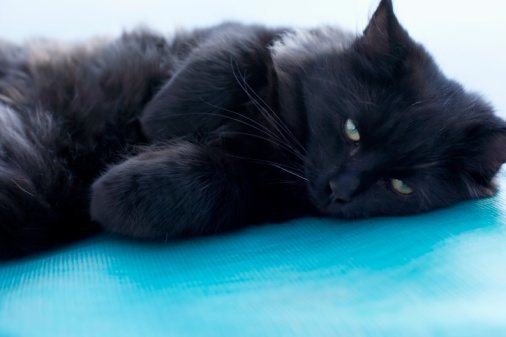 Just a few weeks ago, a 13-year-old indoor cat in Iowa was diagnosed with swine flu. “Two of the three members of the family that owns the pet had suffered from influenza-like illness before the cat became ill,” explains Dr. Ann Garvey, a veterinarian with the Iowa Department of Public Health.

Although everyone recovered, many pet owners remain concerned about their own cats and families. As is the case with so many other illnesses, the facts are hard to separate from fiction. We’ve debunked some misconceptions, and we offer facts and pointers to help you deal with cat infections.

This is now fact, thanks to the confirmed Iowa case. It’s reason for caution and concern, but not panic. “The risk of other cats becoming infected appears to be low at this point,” says Dr. Alfonso Torres, former chief veterinary officer of the United States and current associate dean for public policy at Cornell University’s College of Veterinary Medicine.

People can give cats swine flu

Experts believe that people can transmit the H1N1 virus to cats and ferrets. “We’re seeing reverse zoonosis, with the virus jumping from people to animals,” explains Torres. But few such cases have been documented. According to Dr. Kelly M. Wright, director of The Cat Clinic of Orange County in Costa Mesa, Calif., “generally, these types of viruses target different cells in the respiratory tracts of humans and other mammals.” In other words, a virus that can thrive in the respiratory tract of one type of mammal isn’t likely to do so well in another.

People can give cats other types of flu

Experts believe this is likely but uncommon. Nevertheless, it’s better to be safe than sorry. “Avoid direct contact with pets if you have the flu,” advises Michael San Filippo, a spokesperson for the American Veterinary Medical Association. “Keep them off of your bed and be sure to cover up coughs and sneezes. Wash your hands regularly.” He adds, “Pets are members of our families, so exercise the same precautions that you would for other friends and family.”

Cats can catch other types of animal flu

That statement has been true on occasion. A 2006 report from Cornell University’s College of Veterinary Medicine mentioned that cats can contract avian flu — aka “bird flu” — and also transmit the virus back to birds. “This helped the virus spread between poultry farms,” says Dr. Wright. It’s also one of the many reasons you should always keep your cat indoors.

are the same This is a myth, according to Dr. Wright. “The term ‘flu’ is used to describe an influenza virus,” she explains. “But cat upper respiratory viruses are most typically the feline herpes virus (FVH-1) and feline calicivirus (FCV).” She adds, “I think we use the word ‘flu’ descriptively so that owners understand that the symptoms of these conditions can mimic a human flu virus.”

How to Help Your Cat

Although true flu among cats doesn’t occur often, your cat can still develop respiratory problems and other symptoms that resemble human flu, as well as symptoms unlike those associated with human influenza. A cat with a respiratory infection may not only sneeze and cough but also lose its appetite, develop a high fever and find it difficult to breathe through its nose. The cat additionally could squint, develop cloudiness or heavy discharge from the eye, and experience severe swelling of the tissue around the eyes.

Any cat that develops such symptoms needs to see a veterinarian. The veterinarian can recommend treating the respiratory symptoms with antibiotics, which will help combat the bacteria contributing additional discomfort to the cat. Your veterinarian can also prescribe an ointment to ease eye symptoms, and nose drops to relieve nasal congestion.

Although animal health experts continue to investigate how well the human swine flu vaccine works on cats, a readily available vaccine — the FVCRP — can help prevent most other feline respiratory infections.

“FVCRP is a common combination vaccine recommended by the American Association of Feline Practitioners every three years that will help protect against both the calicivirus and the herpes virus,” says Dr. Wright. “These are the two most common respiratory viruses in cats today.”

Tags
Previous Article
An Inside Look at Cat Grooming
Next Article
DIY: Homemade Toys for Cats