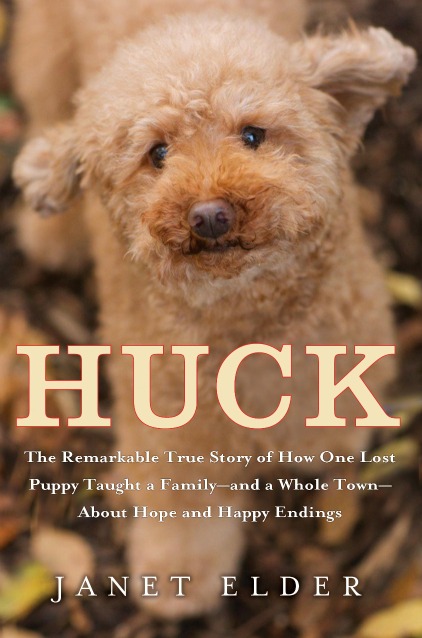 Take two right turns, a left, another left, and you’re there.

Or was that two lights and a left?  Or, wait, was it – no, you should have written it down. Now you’re discombobulated, your GPS is wrong, your map is old, you’re late, and this part of town is way beyond scary.

You hate being lost. Now imagine how your beloved pet would feel, and you understand the panic and despair on both sides of “Huck”, the new boy-and-his-dog memoir by Janet Elder.

Even before he could talk, it was obvious that Janet Elder’s son Michael loved animals.

Elder somewhat blamed herself. She and her husband furnished Michael with the requisite squad of stuffed animals when he was small. They indulged him when he made pets of inchworms from produce stands, and smiled when he befriended livestock while on vacation.

Until Elder was diagnosed with breast cancer. Like the journalist she is, she gathered facts and accepted treatment but her stoicism ended with her son. Thinking that Michael – and the entire family – might need a diversion, Elder and her husband decided that something furry and four-legged might be just right.

Arriving from a breeder in Florida, he was just a mere handful of exhausted fluff. Gently pulled from his carrier, Huck had Michael wrapped around his little claw within minutes, and his intelligence and puppy demeanor quickly won over the last skeptic in the household.

Huck was bathed and taught, coddled and cherished, so it was natural that, when the family was planning a spring vacation, Elder would seek special accommodations for the pup. When her sister, who owned several large dogs, agreed to watch Huck, it seemed like the perfect solution.

Nobody thought that eight-month-old Huck could escape the fence…

Though the cover of “Huck” comes with a subtitle that indicates a happy ending, dog lovers know the horror of a lost pup and the joy that comes with reuniting. And though you know, up-front, what happens in the end, author Janet Elder builds the kind of suspense that will make puppy parents squirm.

But in the middle of that suspense comes a lot of tedium. Huck was lost in a small community and it seemed that everybody in town pitched in to help find him. In her gratitude, Elders gives a shout-out to all her helpers. She was undoubtedly right in doing that, but it can make for long passages of “so what?” amidst your gasps.

Still, if you’ve got pets and you’re obsessive about the tightness of the collar, the security of the fence, and the strength of the leash, you’ll love (and identify with) this book. For you, “Huck” is a book to lose yourself in.